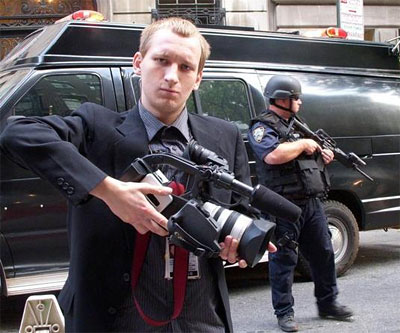 As the 5th Vice Chair of WACAZ I thought I should post this here.

Really? This is News?

BTW, Rudy Giuliani is coming to town and I don't think we have time for this inter movement drama BS! What should we do for Rudy when he comes to town?

To all WeAreChange Chapters:
I want to remind everyone that it’s imperative that during these hard
times and despite our differences that we stay united. We can and shall
not turn on each other and fall into the traps that are laid before us.

Just like Alex Jones defended WeAreChange when we were attacked from all
corners, we defend Alex. We may not all agree with each other and are
certainly not all perfect, but we're in this fight together and should not
be fighting against each other. We come from different backgrounds and
lifestyles but are ultimately working towards a common goal.

You don’t have to like Alex Jones but attacking him is counterproductive.
It was Alex Jones that woke me up from my slumber and motivated me to
start WeAreChange which now has over 200 chapters around the world. It is
his tireless work for years now that has spoken and shown us and he
deserves to be judged by the fruits of labor. We proudly stand
side-by-side with him and the Infowars team as we defend the Republic and
free humanity across the globe.

WeAreChange was not started to bash others and make public spectacles over
petty disagreements. It was started to move away from the drama and deal
with problems in this world by motivating our fellow citizens to take
action.

The WeAreChange name cannot be used to attack, slander, or otherwise
defame Alex Jones or another person's character who we work with. Anyone using the
WeAreChange name to attack anyone in the patriot community should cease
from using the name WeAreChange, it is against our code of conduct and
mission statement and will not be tolerated.

We are all family and we shall stand together resisting tyranny!


13 Comments in Response to To all WeAreChange Chapters: Luke Rudkowski responds to Alex Jones/Tag pissing contest.

in an amongst up = in and amongst us.

Even given cointelpro presence, go out and smell a flower and remember the sun will rise again tomorrow. :)

I think Oyate is funny.  Who are we if we have zero sense of humor?  Not human.  Sometimes the People's Committee for the Advancement of the Grassroots Against the Collective forgets that not everything is a jewish-masonic conspiracy to go back in time and kill all the founding fathers.  Even in the C4L ****-up in CO.  It's not the end of the world.  Not by a longshot.  And we all should be aware at all times that cointelpro is in an amongst up, probably including people you know attempting to plant and grow the seeds of divsion.

Oyate, you're not funny and your little fantasy isn't even creative.  There are real issues going on that resulted from gross misunderstandings so stick to the topic or don't bother.

I probably shouldn't have got involved with this one but I just called Catherine and asked her point-blank. Why did she hang my dirty laundry out to dry?

And the answer I got? Well I just don't know what, I've about had it from here because she said, and I quote, "do your own f*cking laundry".

And whatever else she had in mind, I don't care because she said it in public. There was at least 3 people plus however many spooks and NSA people listening in and they heard the whole thing. And to top it all off, she used my real name, not my later name, not Oyate but my real name and totally blew my cover with the feds. And my wife and practically everybody I know, and it really hurts because it's dredged up practically every painful of my past, every kid on the playground making fun of me because my name was not Tommmy or Petey or Mickey or Pauley, it was Stanislav. Stanislav Sergei Markov Petruska Von Illick III to be specific. I come from a long line of Serbo-Croation nobility although by title and right, I am also a Dutch Barron.

So unhappy me, by getting involved in all these diputes, I have now hazarded and lost all that remains of the respect of the great line of the Petruska Von Illicks. My family will never again rise to true power and respectabilty. I now face a life of dating aspiring young models who use my minimal notariety to socially climb up from the gutters of consumer capitalism.

Young warriors of the R3VOlUTION, do not as I have done. Do not get in bed (literally or philosophically) with Catherine Bleish, neither get into bed with the LOLA girls, nor any other hot and buttered package that's left on your threshhold, for in all metaphorical reality, it's probably a bomb.

And never, ever ask a patriot female to do your laundry.

Wow. It's even a pissing match here now! This is turning out to be a pretty good pissing match. All the dirty laundry is hanging out.

Well I'd just like to say I gave that bitch Catherine Bleish my dirty laundry and asked her nicely to launder and fold it for me and know what she does? She goes and hangs it out dirty! The nerve of some people.

I dunno about this guy John and TAG, but all I can say is if he's running around with Catherine, he's the one who got TAGged. That woman will eat your soul and spit out the bones I tells ya. But for the record, I didn't tell ya.

Can't edit my post.  I meant to say Ted Anderson took my $15k in "cash" and only sent $10k in gold, and dare I mention it took about 2 months to get my metals out of him.

I commented on the Freedom's Phoenix link that had all of the embedded videos, and this story also needs my comments (IMHO).

I am not a AJ cool aid drinker.  I'm pissed off for AJ saying Ted Anderson's prices are the best "he's ever seen" (apparently AJ continues to ignore APMEX.com) as Ted took my $15k in gold and sent me only $10k in gold and refused to reverse the transaction when I got him on the phone and complained.

Even though I was victimized by AJ endorsing Ted Anderson, I still support AJ in this argument because clearly when AJ first showed up he recognized the TV news live remote and he immediately bull horned them.  AJ was NOT addressing the crowd or trying to take over the TAG people who were addressing the croud and failed to recognize a great opportunity to take over the TV news broadcast.

The TAG people were not saying anything very interesting when AJ first showed up, and when AJ was blasting the TV news, the TAG people began to compete with AJ.  They couldn't wait 5 minutes for the TV news live remote to end or for AJ to end as TAG decided to attempt to compete with AJ then put a soft-spoken woman on the bull horn.  GMAFB!  If that wasn't stupid enough, then they split up the protest!

AJ was completely right saying the TAG people didn't know what they were doing.  Then that woman gets in his face and AJ blaster her, and rightfully so, by telling her to get the hell out of his face.  She was trying to interrupt him during his speech.

The problem here, is we have TAG and their good buddies and supporters who made some very bad decisions and got their panties in a bunch.  Then, their buddies attack AJ when clearly they were in the wrong!  I refuse to ever give TAG any of my attention and certainly none of my funding since they really are a bunch of amateurs, then when they get their panties in a bunch they thrash around and hurt the movement.  I won't call them feds or anything like that, but clearly the TAG people and their best supporters are complete idiots that just can't see their own mistakes.

Even if AJ was totally in the wrong, and even if AJs ego is worse than Obama's or Dubya's, so phucking what?  You didn't see that one coming?  I've had enough with TAG and their lame ass supporters that refuse to admit THEIR mistakes and for even starting the fight in the first place.  Phucking amateurs and we don't need them to mess up the movement and help the NWO with their bitching and AJ slams.  TAG and their supporters need to get a phucking life and get out of the truth movement as they just can't lead themselves out of a wet paper bag.  I've had it with them and their bitching.

I was there. When we arrived Alex was at the door of the cop shop screaming on the bull horn. We never perceived it a conflict but as multiple choice. The tag people were on the sidewalk bullhorning the people on the street and passing cars. To me it looked like great planning. I would have never suspected a conflict if I had not heard the Tag people mention it. When Alex was questioned, he said they didn't know what they were doing. I think we can learn much from Alex Jones who has done more of  this than probably any other person on the planet. Alex is not one to "be invited" take his "turn" and step quietly aside. We need us ALL.............

I wouldn't imagine this had any impact outside of our little community.

I liked the "dorkbook" part.

Maybe a bit of history will help.

The pair from Texas are using a confrontational approach perfected by Saul Alinsky from the 30's to the 70's.  He's largely responsible for destroying/saving the United States/communist party depending on your view of things.

What made him so successful, though, was having the press on his side.  He was employed as a columnist by a newspaper in New York City and possibly one in Chicago - he was from there- that was owned by the wife of the Chairman of the Board of the Federal Reserve.

The rats/heroes from Texas at this point are only getting the press that's attracted to constant high pitched antagonism.  The cause may have been right, but the delivery leaves a lot to be desired.  Knowing how they feel about Dr. Paul they may even be commie revolutionaries in our midst creating dissent to bring down the opposition.

As another famous revolutionary says, "Am I allowed not to care?"

Drew, you are a counterrevolutionary and the People's Court of the People's Committee of Street Activity will send you to the gulag for posting this.

Parents who ran marathon with their six-year-old son slam...

The Epiphanies of Youth

Pfizer Pushes Third Vaccine Dose For Kids 5 And Under

Schoolchildren's lives have been destroyed. Any lessons learned?