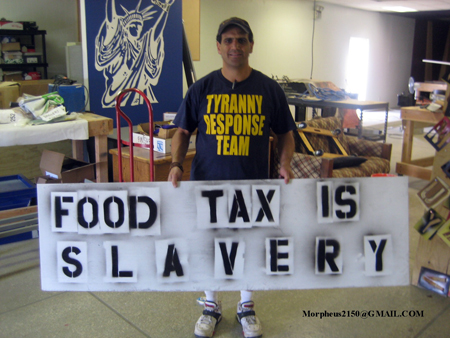 "You load sixteen tons, what do you get? Another day older and deeper in debt. Saint Peter, don't you call me, 'cause I can't go; I owe my soul to the company store."

"Sixteen Tons" is a song about the life of a coal miner, first recorded in 1946 by American country singer Merle Travis and released on his box set album Folk Songs of the Hills the following year.

As expected, Phoenix Overlords approved a 2 percent sales tax on basic food items during a hastily-called meeting Tuesday. The move is an effort to close the city's $245 million budget deficit.

The tax, which amounts to $2 for every $100 worth of food purchased at grocery stores and other retailers, would kick in on April 1, and would close the deficit through June 2011. Overlords claim they will sunset the tax after five years. Yeah, sure.

The song describes how workers were not paid cash; rather they were paid with unexchangeable credit vouchers for goods at the company store, usually referred to as scrip. This made it impossible for workers to store up cash savings. Workers also usually lived in company-owned dormitories or houses, the rent for which was automatically deducted from their pay.

In the United States the truck system and associated debt bondage persisted until the strikes of the newly-formed United Mine Workers and affiliated unions forced an end to such practices.

Well, it appears that slaves down on the Overlord Phil Gordon's Phoenix Plantation will be paying more for their groceries in a couple of months with their increasingly-devalued Federal Reserve Notes, or FRNs.

Overlords could, however, reverse their decision based on input from a series of meetings scheduled for later this month. At the meeting on Tuesday, Overlords recognized that slaves may not have had sufficient time to protest the tax hike, so they encouraged all slaves to participate in these upcoming meetings in order that they might fully grasp the futility of their resistance! Barry Hess, Donna Hancock, and others have already begun the process to challenge the decision.

Supporters of the tax, including Mayor Phil Gordon, say it will generate an additional $50 million for the police department, fire department, parks and other city services that are currently on the chopping block.

Opponents say it will hurt the poor and those on fixed incomes. Phoenix is one of about 20 Arizona municipalities that does not collect a tax on food.

The expected 2 percent food tax is the same as the city's current sales tax rate. While the food tax was approved, the vote was not unanimous.

"This tax is wrong," said Overlord Sal DiCiccio. "It's the wrong direction for the city of Phoenix. It's not fair to burden the poor, the seniors and the working class -- when they're struggling -- with a tax like this."

For more bold and creative expression, visit us at http://www.musiciansforfreedom.com

And the city bosses say to the people: