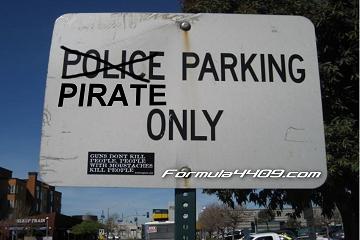 They are mysteriously encourging the wife to file a restraining order because ....you guessed it...they can Illegaly take your constitutional right away by threat of jail if you possess or are around firearms because of some "restraining order"
funny...there is no mention of a restarining order in the 2nd amendment....the police and prosecuters are out of control...
Ok heres the spin

He indicated to police that he anticipated some form of Armageddon to take place shortly and he was getting prepared, Police Chief Glenn McKiel said.

In addition to the grenade-type devices, police found approximately 20 weapons, including high-powered rifles, shotguns, and handguns. All of the firearms were purchased and registered legally within the past 10 months, McKiel said.

Girard, a computer consultant, had a Class A license, which enabled him to purchase large-capacity firearms. According to police, he was granted the permit without question.

He did not have a criminal record and there was no indication at the time [the permit] was issued that he shouldnt have one, McKiel said.

McKiel added police are not allowed to ask applicants why they are seeking a firearms permit.

Police seized all the weapons and ammunition and revoked Girards license to carry firearms....[uhhhhhh we have the second amendment!]

Tactical officers evacuated two other condominium units in Girard's building and brought residents to the police department while the search was completed.

Salem District Court Judge Richard Mori ordered Girard held without bail after he pleaded not guilty at his arraignment this morning. Mori slated a dangerousness hearing for Feb. 12.

Another reason why we must take back our Government because they must applauding this with laughter! This is a very good example for this to happen everywhere and then it would be just a regular thing? People will get use to it and say: so what! The police were doing someone elses bidding. I consider this Communist! Its going to continue til people start fighting back and I mean really doing so

You also claim "They are not stolen, they have been seized pending the outcome of his case. For obvious reasons, the man may go on a rampage if he is bailed with those weapons against his neighbor and his wife."

While I am an avid supporter of the second amendment , in this case the polce did what they had to do.

Several issues are left out of this story either by design or by space limitation.

The man's wife is the one who came to the police station and reported what her husband had, that her husband began to talk about shooting people in the head, etc., she told police she was afraid to go home.

Police discovered a shooting range in the man's attic, (not a properly built one), the man lives in a duplex, would you want to live next door to someone who is shooting guns in the unit next to you?  In Massachusetts it is illegal to discharge a firearm withing 500' of a dwelling, with the exception of self defense or in a properly constructed and certified indoor shooting facility, without the permission of  your neighbors.

While I am a Police Sergeant, I am not with the Manchester by the Sea Police Department, however I do know Chief McKeil, because I worked under him in another agency.

Chief McKiel is also a supporter of the second amendment, but he also has to balance that out with protecting the community, once the man is charged with a violent felony (4 counts of possesing an infernal machine) the police may remove the firearms and ammunition for the safety of the wife and the neighborhood.

They are not stolen, they have been seized pending the outcome of his case.  For obvious reasons, the man may go on a rampage if he is bailed with those weapons against his neighbor and his wife.  The police department would have been negligent to leave all those weapons and ammunition at his disposal, especially in light of statements obtained by the wife and neighbors.

I really get tired of people trying to make these legal seizures firearms by police when violent crimes occur, as the police confiscating guns for no reason.

After taking his property do the police now guarentee the personal safety of Mr. Girard?

Those who register, license, surrender, or allow to be taken, their weapons deserve what they get.

5 Parallel Economy Businesses YOU Can Build

Elon Musk tells entrepreneurs to get into the lithium business: 'It's a license to print mon

Officials Demand Mom Pay Them $5,000 for the Privilege of Selling Homemade Cookies

Jack Ma "Behaved Too Much Like An American Entrepreneur"...