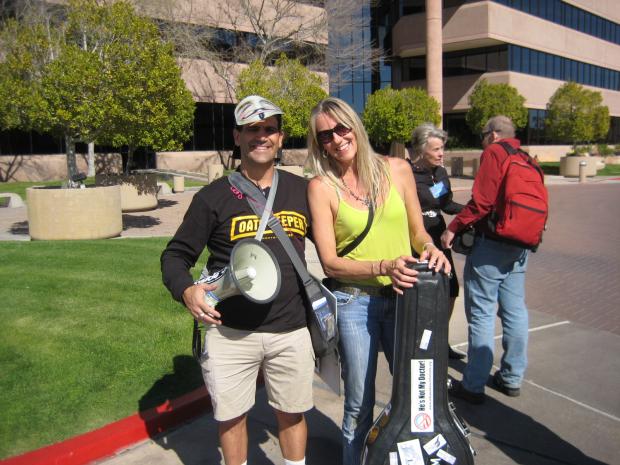 Former AZ State Senator Karen Johnson held a press conference today, Monday, 2/15/10 in front of Senator John McCain's office in Phoenix around 1:30 PM. Ms. Johnson went public in 2008 with questions on 9/11. Today, she provided further details of her position and why she chose to make her views known.

Arizona activists joined Ms. Johnson along with Blair Gadsby to announce that Richard Gage and Architects and Engineers have succeeded in gathering over 1000 signatures from qualified architects and engineers. Sharlene debuted Jordan Pages's song, "Listen" to celebrate the occasion. The organization plans to make its official announcement in San Francisco, CA on Friday, Feb 19, 2010, at 11 a.m.

"I guess I define myself as a truth seeker, that is what I want, I want to find the truth," says Senator Karen Johnson, representative of Mesas District 18 for nearly two decades.

"...in particular, I would like to introduce to you a very courageous man named Blair Gadsby. I'm going to ask the folks with Blair to help him stand, as I tell you just a little bit about him. Blair is very weak, because he has been fasting for more than two weeks to try to bring attention to the cause of 9/11 Truth. This is the 16th day that Blair has gone without food, and spent his day outside the office of U.S. Senator John McCain, pleading with the Senator to take a look at new evidence of the 9/11 crimes.

We have one man here, who is sacrificing his own personal needs and desires, to stand boldly, pleading for the world to take notice, to question, to research, and not place their lives in the hands of media sound bites. To think for themselves, consciously and critically.

Blair is an educator, and to me this is what great educators do. Thousands of people all over the country, and actually, around the world have been watching on the internet as this hunger strike progresses here in Phoenix. I want Blair to know that I am one of his biggest fans, and that good people everywhere admire him for his courage and determination.

Please give a warm welcome to Blair Gadsby and the 9/11 Truth movement."

2 Comments in Response to AE9/11Truth To Announce Over 1000 Engineers Demanding a New Investigation!

great music and activism!  You Rock

Excellent!!!  This is grassroots magic!  Shar, you are so amazing. I love your rendition of "Listen".

Good job everyone getting the truth out again and again.

Biden Blasts Americans on Eve of 9/11:

The 9/11 Mother of All Scams Until Flu/Covid Arrived

September 11, 2001: Questions to Ask if You Still Believe the Official Narrative

Understanding the Guilty Culprits That Got America into Afghanistan--