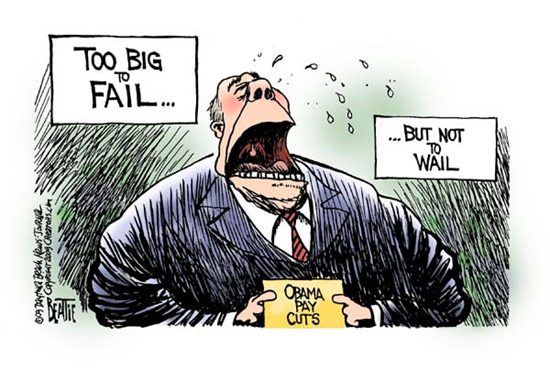 The Center for Labor Market Studies of Northeastern University in Boston has released a study breaking unemployment statistics across the income spectrum. The result? Those at the top are pretty much fully employed. But the further down you go, the higher the concentration of unemployment.
The chart below summarizes their findings:
Can you believe what you are seeing? So there is 37.8% unemployment for persons below $20k? THIRTY SEVEN POINT EIGHT PERCENT?
Crank that up to the next level, those under $30k and you get 50.5%! FIFTY POINT FIVE PERCENT UNEMPLOYMENT.
AND AT THAT POINT, IN MANY PLACES, WE'RE APPROACHING MEDIAN INCOME.

And the scope of the study, with data ending 4Q 2009, shows this trend as accelerating. Rapidly. This is bad kittens, this is very very bad. Maybe not for you, but it's bad.
Given as the USA has about 304 million in population, the chart below gives us some idea of how many of us we're talking about from top to bottom.

Source: Wikipedia.
Gee, and the Wiki article tell us there's only about 4.5 million people (1.5% of population) making over $250k? Hmmmmmmm. That's about the income level it takes to buy a nice farm to retreat from the fall of society to.  You know, all those Goldman Sachs executives buying guns because they are afraid the people they robbed are going to rob them back.
So for every person in that bracket, there's only about 67 million of the rest of us to defend themselves from.
So how safe are we feeling at the Goldman Acres Dairy Farm?

Sorry but those numbers don't just add up.  You can't take the percentage at each level, add them together, and get the percentage below a certain point.  It would be closer to an average of the three numbers but even that doesn't quite work.  You have to know the total numbers at each level to be able to figure out the actual unemployment rate.

But, interesting article nonetheless.  When I last worked for most of a year, in 2009, I was towards the top of that scale so that makes my current unemployed status feel that much worse.  Most of my cohort have jobs, apparently, but I don't.

maybe its time for graduate school.

Unfortunately Ross, deflation is having the same effect on the worker pool as small business can't access credit and sales are down nearly across the board in the service sector.

Ultimately, given the Fed's course, there's no way out but inflation or default. Rational economics doesn't seem to be an alternative. The plan is the rich stay rich and the rest of us get tossed on the curb.

And of course, the little charts here don't tell that aspect. 1.5% make over $250k but that's PEANUTS compared to what the fat-cat policy makers make and everybody knows it.

Federal officials allege the national economy is stabilizing, even growing. But would it be more accurate to state the Economy has stabilized after contracting and the New U.S. Contracted Economy will need millions less workers for years. Some businesses believe government unemployment numbers will increasingly not reflect unemployment when determining if the U.S. or region of the country is in a recession. Unemployment can only get worse if Obama intentionally inflates the dollar to pay its debts; that will reduce Citizens’ buying power, causing more unemployment.

Mike Rowe on the labor shortage under Biden's economy: Work has become the 'enemy'

The "Scariest Paper Of 2022" Reveals The Terrifying Fate Of Biden's Economy:

This is not the time for celebration

Small Business Sales And The Running Of The Bull

The Layoff Tsunami Has Begun: 50% Of U.S. Companies Plan To Eliminate Jobs...