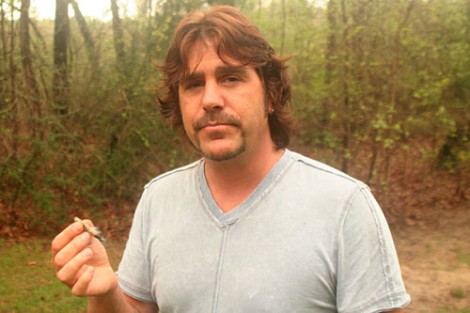 To call Barry Cooper “over the top” is an understatement.

You may have seen him on the pages of Maxim, or during one of his many appearances on CNN, Fox News and Spike TV. He’s the cop who turned against the drug war, whose been trying to sell a self-explanatory reality show he calls “KopBusters.” Yeah, that guy.

In American pop culture right now, there’s nobody quite like him. As one of the former top drug cops working the Texas highways, he was ferocious, bringing down hundreds of people for possessing even tiny amounts of an illegal substance.

In his new life as an anti-prohibition crusader and activist filmmaker, he’s just as ferocious, but now it’s his former colleagues in law enforcement who are sweating his intimidating gaze.

All of them, ass-wild tales to tell. Each true.

Cooper is on a self-described mission to free America’s pot prisoners and take down the abusive cops he once sought to emulate. In the terminology of war, Barry is an insurgent, lobbing bombs into the fourth estate as his form of penance for all the people he put behind bars on drug offenses.

The face of an American insurgent. (Photo by Stephen C. Webster)

Believe it or not, he’s even turned a few cops into admirers.

That’s a hell of a thing to say about a guy whose livelihood is kept afloat by selling DVDs that teach viewers how to buy, sell, transport and grow marijuana without getting caught. A hell of a thing, yes, but also true.

On Wednesday, he again proved his moxie with handling law enforcement, this time in something he called “Operation Finders Keepers,” and I just happened to be invited along to watch the madness unfold.
—————————

Standing in the entrance to Barry’s house in Pflugerville, just north of Austin, on that early February afternoon, about 12 people waited for the film crew to get Barry’s wireless microphone situated.

Pinning a fluffy, black piece to his jacket’s lapel, one of Barry’s cameramen joked, “This doesn’t look ostentatious at all.”

Cooper tilted his head. Even while wearing sunglasses inside, I could almost see his eyes craning upwards, his mouth slightly ajar.

“Austintagious?” he awkwardly pronounced. “I don’t even know what that is! Is that like, something to do with Austin?”

Everyone laughed, but he was being at least partially serious. It hardly mattered, though: the time to drive had come.

Captain George Nassour, of the Liberty Hill Police Department, was about to have a very bad day.
—————————

Several months ago, Officer Nassour had stumbled upon a little black bag at a self-serve car wash in LIberty Hill. Inside, he discovered a drug ledger written in Spanish, a glass stem seemingly burned on one end, $45, some beers, a half-eaten peanut butter sandwich, a pair of red and blue 3D glasses and various other personal effects. Wedged in the top of the vynil lunchbox, a cleverly disguised GPS tracking device.

In the words of Admiral Ackbar, it was a trap, laid by Cooper who’d called in an anonymous tip about a suspicious package.

Cooper said that Nassour was specifically targeted that evening because he’d seen video, sent to his Web site by a reader, which showed the officer forcing his drug dog to false alert on a vehicle, thereby giving probable cause for a search.

Crouched behind bushes near the car wash, Barry had his camera leveled at the officer. The goal was to catch Nassour on video stealing the money, then pick a time later on to confront the officer with a camera crew, ambush-news style.

On the video, Officer Nassour can be seen flipping the top of the box open and peering inside, then returning to his car and driving away.

A second anonymous call noting what looked like drug paraphernalia in the bag was enough to get Nassour back out to the scene. This time, he carefully scanned the area with his spotlight before approaching the box. Seeing nobody in the distance, he seized the package and rummaged through the items within, eventually walking toward a nearby dumpster, then returning to his vehicle and driving off.

Inside the dumpster, Cooper and crew found the bag and almost everything that was in it. Their GPS tracking device had been removed and tossed into a separate trash can. The money, the phony crack pipe and their fake drug ledger were all gone.

Several days later, he filed a Freedom of Information Act (FOIA) request with the Liberty Hill Police Department, in search of a report about the bag. There was none.

For contrast, Cooper set up a similar operation in Lockhart, Texas, just south of Austin. Same bag, same contents, another faux crack pipe, another drug ledger and another $45, this time hidden in a public park grill. One anonymous call later, Officer C. Jakel of the Lockhart PD showed up at the park to investigate the suspicuous package. After a brief examination, he took the box directly to his department’s evidence room, according to Cooper’s GPS location tracking.

As a law enforcement official, Nassour likely knows that theft under $50 in the State of Texas is a Class C misdemeanor, but when it involves a public servant the state steps it up to a Class B. Tampering with evidence is a felony. The Class B misdemeanor is enough to get Nassour terminated from the force. If he’s found to have committed the felony, his fate would then rest with a prosecutor.
—————————

Cooper’s plan was seemingly simple: take a camera crew and local media out to Liberty Hill while Nassour was on shift, then call in an anonymous tip claiming to have video evidence of someone committing a felony.

“But I just want you to send Captain Nassour,” he told the Williamson County police dispatcher. “He’ll recognize the suspect.”

Cooper squares off with the LHPD, bearing video of an alleged felony. (Courtesy photo)

After a series of phone calls, it became clear Cooper’s man wouldn’t be coming. Though Barry had been working with an informant — a former Texas police officer who asked not to be identified in this story — the information he’d provided about Nassour’s schedule was incorrect.

After a brief strategy session, Cooper decided to call out the officer on duty, who was more than a little leery of a camera crew standing in the parking lot of the local “Donut Palace.”

“Donut Palace?!” Cooper exclaimed when we drove past. “Yeah, we’re gonna do this at the Donut Palace. That’s too funny. How can you pass an opportunity like that?” (Photo by Stephen C. Webster)

About 100 yards away, a white Dodge Charger sporting police colors slowed and stopped as soon as the driver was within eyeshot of the strange scene. About five minutes later, he rolled forward roughly 50 yards, then stopped again.

The officer eventually pulled into the parking lot and hopped out of his car. As the Cooper and crew approached, the officer became visibly nervous, holding out his rigt palm to impede their progress as his left hand affixed to a Taser on his belt.

“We’re unarmed! We’re friendly! We’re non-violent people!” Cooper declared as he and his entourage took careful steps toward the officer, allegedly the only cop on duty in Liberty Hill that afternoon.

Cooper was still holding fast to the idea that he’d confront Nassour, show him the video and catch him stumbling over his words, or denying that he’d taken anything. That wasn’t to be, but after some negotiating Officer Rodriguez agreed to contact headquarters and try to get the chief to meet with Barry.

It worked. As he was breaking the news to Barry — even after telling him that the chief was not on duty — Rodriguez suddenly seemed spooked, reeling back and holding one of his palms up to Cooper.

“Relax a little bit, Mr. Rodriguez,” Barry scolded. “… That looks a little bit weird. We’re all nonviolent citizens and you doin’ all that is a little distracting, okay?”

Rodriguez murmured something about “personal space” and folded his hands over his torso.

Moments later, Cooper was on the LHPD’s doorstep, bartering to get a camera inside for the interview with Chief Randall Williams.

Williams initially refused to allow a camera into the station, even as he stood next to a sign that noted the building is constantly under audio and video surveillance.

“Well then, I’m not gonna show you this video evidence of someone committing a felony,” Barry said. “It’s actually one of your officers.”

That did it. Williams agreed to allow one camera, but refused to let everyone in. “We’re not turnin’ this into a circus,” he said.

It was too late for that, I thought. Then again, perhaps the chief’s concern was valid: a police department that’s made its hobble in the carcass of a small bank’s former offices probably isn’t capable of handling any elephants in the room.

Once inside, Cooper sat him down and played the video. On the footage published to the Web, Chief Williams seems hesitant to jump to conclusions, but did confirm the subject was Captain Nassour and his black Dodge Charger.

He added that if Nassour did indeed keep the money, he would be fired.

“I appreciate you bringing these concerns to my attention,” Williams said. “It is a bit unusual, but, uh … You’re doing a service. I mean, I’m not … I don’t approve of everything you do because I don’t know everything you do. But, it’s … Watch groups are necessary.”

Contacted by this reporter, Chief Williams was also media shy. However, in offering a “no comment,” he explained that police do not talk about ongoing investigations — confirming that Cooper indeed triggered in a probe into Nassour’s actions. Cooper said he was turning the video over to the Texas Rangers, who investigate police in departments with no internal affairs division. A Texas Rangers spokesperson did not reply to an interview request.

Barry, his wife Candi and a cameraman leaving the LHPD, stunned at their success. (Photo by Stephen C. Webster)

Meanwhile, Barry said he plans to find himself in Lockhart sometime soon, bearing a framed certificate of excellence with Officer Jakel’s name on it, as a token of appreciation for turning in the money and passing Cooper’s “Finders Keepers” test.

Leaving the Liberty Hill, Barry turned to his crew in their black SUV and shook his head. “Nobody got hurt, so that’s good,” he said. “But it didn’t exactly go according to plan. That’s alright, we still got our man.”

Then he looked down momentarily, seemingly at a loss for words.

“I … You know, back when I was a cop, I would have taken the money too,” Cooper said. “Ya’ll forgive me for that, okay?”

The passengers, almost all in Barry’s employ, nodded quietly. “We forgive you, Barry,” someone said.

This video was published to YouTube by user nevergetbusted on Thursday, Feb. 25, 2010.

CEO of $2 billion marketing startup Iterable is fired for 'taking LSD at work...'