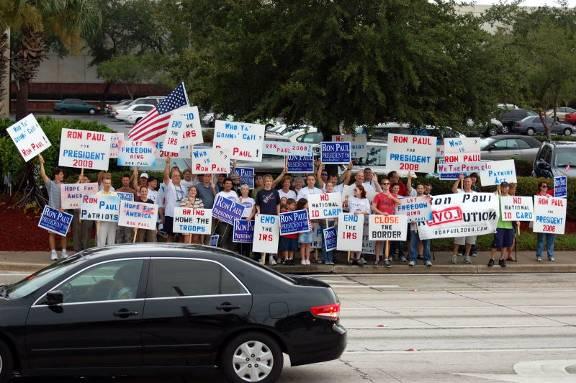 by Ron Paul
(Ron Paul AUDIO of this Article)

Last week I had the opportunity to bring up spending and transparency in two important hearings.  On Wednesday I questioned Federal Reserve Chairman Ben Bernanke on some highly questionable uses of funds at the Federal Reserve, and on Thursday I asked Secretary of State Hillary Clinton about exorbitant spending at the State Department.

It is extremely important to continue bringing these issues up, especially in light of our difficult economic times, when so many are out of work, as I saw up close in my district at the Oceans of Opportunity Job Fair in Galveston two weeks ago.  Those who are working live with the fear of losing their jobs as they struggle to pay bills.  Meanwhile, Washington is talking of increasing their taxes, something voters were promised, clearly and adamantly, would not happen in this administration.

Government also struggles with money, but the struggle centers on how to get more of your money into government coffers.  Rather than expanding the Federal budget in the face of economic downturn, we should be focusing on eliminating waste and being the very best stewards of public funds that we can possibly be.  Most businesses have had to streamline and cut back in order to survive, and so it is only fair for our government to do the same.

Instead, the State Department is building a $1 billion embassy in London, the most expensive ever built.  The plans even include surrounding it with a moat!  I asked the Secretary of State about this massive expenditure, and she claimed the funds for this were coming from the sale of other properties.  If money can be saved, then save it!  Don’t spend it on such an extravagant structure overseas when people back home can’t find jobs or pay bills.  Not only that, but the administration has committed to doubling foreign aid.  That is one promise that is likely to be kept, despite our economic crisis.

I asked Chairman Bernanke about Federal Reserve agreements with foreign central banks and if he had had any conversations about bailing out Greece, which he flatly denied.  However, he recently announced that the Federal Reserve will be looking into Goldman Sachs’ derivative agreements with Greece.  Goldman Sachs, as we know, has “too big to fail” status with the Fed, so it is conceivable that any Greece-related catastrophic losses at Goldman Sachs will once again be passed on to taxpayers.

Perhaps most sinister are the revelations in Robert Auerbach’s book “Deception and Abuse at the Fed” that $5.5 billion was sent to Saddam Hussein in the 80’s - money that allowed Iraq to build up its military machine to fight Iran prior to the first Gulf War, the very machine turned against our brave men and women within just a few years!  I agree with Bernanke’s characterization of this – it is indeed “bizarre” to think that Americans at the Federal Reserve could engage in this type of behavior, which a some have called “criminal”.  However, Professor Auerbach served as a banking committee investigator, and as an economist at the Treasury Department and at the Federal Reserve.  His claims are hardly without merit.  In fact, they are solidly backed by court rulings and other evidence.

The lack of accountability and transparency in our leaders on government spending is appalling.  We simply must keep pressing these issues and voicing our objections if we are ever to reverse our failed policies.
source

Real Wages Plummet As Inflation Hits The US Recovery