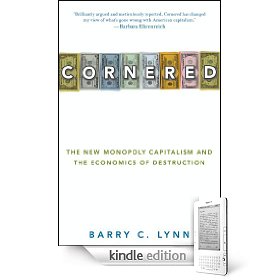 Barry C. Lynn\'s "Cornered: The New Monopoly Capitalism and the Economics of Destruction" - by Stephen Lendman

Lynn is director of the Markets, Enterprise, and Resiliency Initiative, a senior fellow at the New America Foundation, and author of "Too Big to Fail" about the dangers of monopoly capitalism.

He expands on the threat in his newest book titled, "Cornered: The New Monopoly Capitalism and the Economics of Destruction," explaining today\'s peril given the power of predatory giants.

They control governments, the courts, war and peace, dominant information sources, and essential services, including health care, air and water, what we eat and drink, where we live, what we wear, and school curricula to the highest levels. They own genetic code patents, basic human life elements to be commodified the same as toothpaste, tomatoes or toilet paper.

In "Cornered," Lynn explains the danger and urgency to address it. Our lives and futures depend on it.

It might have been different had Thomas Jefferson and James Madison prevailed over John Adams and Alexander Hamilton in crafting America\'s Bill of Rights. They wanted 12, not 10, including "freedom from a permanent military (and) monopolies in commerce."

Imagine the possibilities had they prevailed, or if early leaders agreed with Jefferson in 1816, seven years after his presidency, saying in a letter to a friend:

"I hope we shall crush in its birth the aristocracy of our monied corporations which dare already to challenge our government to a trial of strength, and bid defiance to the laws of our country."

Earlier, he opposed chartering the first Bank of the United States, a 19th century version of today\'s central bank, what Andrew Jackson called a "hydra-headed monster," and Lincoln described as predatory money powers "more despotic than a monarch, more insolent than autocracy and more selfish than a bureaucracy." He feared they\'d accumulate enough wealth and power to destroy the Republic, similar to former Supreme Court Justice Louis D. Brandeis\' view saying, "We can have democracy in this country, or we can have great wealth concentrated in the hands of the few, but we can\'t have both."

Others call it fascism or a reasonable facsimile with elements including:

-- the despotic union of corporate and state power - aka corporatism;

-- the disdain for human rights, civil liberties, and ordinary workers;

-- the dominance of militarism, belligerency, and permanent wars;

-- an obsession with national security;

-- the control of public information; and

-- the omnipotence of corporate giants, taking full advantage to pillage and profiteer.

Lynn\'s book tells why, beginning in his preface titled, "Of Rule and Ruin," saying he warned about monopolization dangers because:

"our political economy is run by a compact elite that is able to fuse the power of our public government with the power of private corporate governments in ways that enable members of the elite (to freely decide) who wins, who loses, and who pays."

His book is "a chronicle of a death foretold, and the corpse on the street (is) the American Republic." Consolidated corporate power and the political complicity behind it means monopolists run the country and the world, justifying it as free-market fundamentalism - a corrupted deception masking predatory dominance that destroys democratic freedoms.

Ronald Reagan accelerated it when government stopped enforcing antitrust laws, and encouraged consolidation, production outsourcing, destruction of America\'s manufacturing base, the offshoring of high-paying jobs, financialization\'s ascendency and power of Wall Street, and the ability of corporate predators to break the law and get away with it, today more than ever under Obama.

Lynn calls his book "a sort of tour of monopoly in all its many guises, in the United States today....how monopolists rip us off as consumers, raising the prices we must pay" for everything including essentials becoming more unaffordable. He covers new monopoly forms and others thought long ago vanished. Understanding them is key to knowing the dangers, from phenomena including:

-- the destruction of organized labor, aided by corrupted union bosses;

-- the burgeoning national debt and current account deficit; and

The auto industry is instructive, Lynn saying it "resembles the Hydra, the many-headed monster from Greek mythology." Like their heads relying on one body, the automakers "increasingly rely on a single common body of companies that supply the same components to all of them."

In today\'s hard times, they stand or fall together, governments facilitating consolidation and bailing out the majors, or in other words, socializing risks, privatizing profits, and doing it for other endangered sectors, Wall Street getting the most by far from a privatized central bank they own and US Treasury they control.

-- examples of monopolies and the fallout from unrestrained corporate dominance;

-- the effects on ordinary people; and

-- how it affects other systems - ones in place "to protect peaceful international relations, our knowledge of how to make the products and grow the foods we need, and our political institutions."

Without antitrust enforcement, monopoly options include:

-- home-based ones to build a power base to capture global markets;

-- pincer ones - "One of the oldest techniques for capturing and protecting monopoly positions" by controlling related activities, then using them to consolidate and crush competition;

-- trading ones that rely on offshore suppliers, investing instead in marketing and strategic alliances for greater market share;

-- middleman ones to build power positions between producers and end users;

-- leapfrog ones by repackaging old businesses in new technologies to escape government oversight;

-- futures ones so financiers can dominate trading markets for commodities, financial instruments and currencies, etc.;

-- respecting other monopolies so they\'ll respect yours; and

-- perfecting your monopoly with new positions, raising prices to exploit them.

These practices made the land of "free-market capitalism" the land of monopoly, Lynn calling it nothing mysterious, saying:

Monopoly is just "a form of government that one group of human beings imposes on another group, (its purpose being to let) the first group....transfer wealth and power to (itself. They) organize and disorganize, to grab and smash, to rule and ruin, in ways that serve their interests only. At bottom, monopoly is merely a political tool," not because of a better product or service, but through better capitalization and political connections.

The rich "reappropriated the institution of the corporation after (early 20th century antitrust laws restrained them), regarding (them) as the \'owners\' of these institutions lies at the heart of our present crisis."

Our system\'s single biggest problem is having ceded "almost complete power over these institutions (to) a class of people whose interests (aren\'t) served....by building things but by breaking" them. Capitalism lets some people "use the power in concentrated capital to harness free citizens" and crush democratic freedoms.

As a result, monopolies run America. Antitrust enforcement is null and void, and according to Lynn: "It will take more than a lawsuit or two to overthrow America\'s corporatist oligarchy and restore a model of capitalism that protects our rights as property holders and citizens."

Getting money out of politics is key - the reality that big money dictates policy, pre-selects candidates, predetermines outcomes, gets the best democracy it can buy, assures a de facto one-party state, and a dominant media trumpeting the best of all possible worlds that\'s, in fact, corrupted, broken, despotic, and ruinous by benefiting the rich against the rest.

Short of sweeping fundamental change, nothing will deter corporate giants from securing total global control in a world intolerable for most, the direction we\'re now heading unless mass people power stops them. There\'s no other way! So what are we waiting for?

The Road to Fascism: Paved with Vaccine Mandates and Corporate Collusion

Lying with Malice Aforethought in Mind