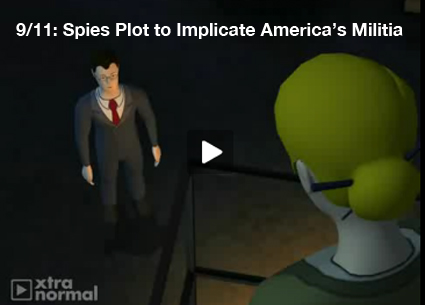 Our nefarious spies discuss 9/11 while plotting a False Flag attack that will be used to implicate the modern American militia; between quoting Patrick Henry, Benjamin Franklin, and Voltaire, the lovers indulge themselves in a little romantic flirtation.

Madam., I've missed you. It's great to see you tonight. You are looking quite beautiful in the moonlight.

I'm afraid, Comrade. I know that the U.S. government is inept, but we had such a close call on that last mission. Surely they will capture us this time. I don't want to go to prison, Comrade.

There is no freedom without courage, Madam. What occurred on September 11th, 2001 is a matter of facts , physics, and unprecedented violations of national protocol by American officials themselves. I want to give you a few points to remember so that you won't be afraid to pull off this next false flag attack. If we want to spend that Dinar together in Dubai this Winter, we must implicate the militia groups.

I know Comrade. It is well enough that the American people do not understand their banking and monetary system, for if they did, there would be a revolution before tomorrow morning. They are slovenly and stupid. It's those government institutions they put their fat, selfish, ugly, drugged up, and spoiled children in...

On September 11. Keep in mind that multiple air-defense drills were planned for the morning. These exercises left only two fighter jets available to protect the entire Northeastern United States. We have been promised plenty of cover for our operation, Madam.

Sometimes I feel sorry for that group they call the "truthers." Voltaire once noted that it is dangerous to be right when the government is wrong.

Patrick Henry once asked, "Is life so dear, or peace so sweet, as to be purchased at the price of chains and slavery? I know not what course others may take; but as for me, give me liberty or give me death."

What a brave patriot Patrick Henry was. Aside from Ron Paul, I do not believe that America has any more patriots with that type of dedication. Truly they deserve what we must give them, Comrade. Are you tired of standing there? Why don't you come up for a martini. I'll make it very dry, just the way you like it. I'll put on something more comfortable.

Madam, Benjamin Franklin once noted, "Those who would give up essential liberty , to purchase a little temporary safety, deserve neither liberty nor safety. Madam, do not regret what we must do, for it is Britain's destiny to rule the world. Now, let's relax and prepare ourselves. We need to arrive at the airport early to meet our connections. Indeed, it would be my honor to accompany you this evening for a nightcap.