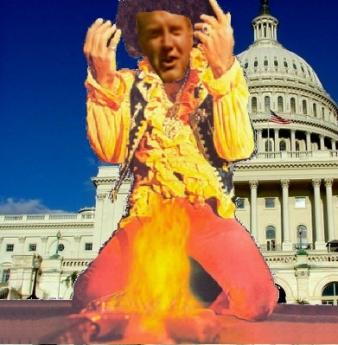 This is sweet.  Nothing like a pissed off traitor to make your day.

9 Comments in Response to Senator declares Ernest Hancock just short of a "terrorist!"

The opposite sex may make fun of three inches or shorter but may find it interesting. An inch more and he will become a ruler!

Just something that a member of the Government terrorist group known as the Senate might say... to keep the bad things happening.

I will be discussing this issue at some point during the first hour of  the RBN version of "Declare Your Independence With Ernest Hancock."  Please feel free to call in at (800)-313-9443 between  11am-1pm Central.

Just short of a terrorist? How tall would Ernie have to be to qualify as a full terrorist?

I am disappointed in Sen Pearce for bringing this kind of sloppy legislation to the floor. If an intelligent reading of the proposed legislation can reasonably reveal a, hopefully unintended, perversion of all Arizonans rights and/or liberties--it needs to be withdrawn.

I have to say this, did Ernie pay Russell to call him a "domestic terrorist" (and ALL that implies)? I couldn't imagine a better illustration of Ernest's point.

If I were a patriotic state senator, and my anti-illegal immigration bill ran afoul of  the patriot crowd, I would want to know why.  I would want their input to fix it.  Not this clown.

Superb job, Ernie!  Judging by the tenor of the panicked squealing, you scored a direct hit.  These No-Nothing dorks go all the way back to the Alien & Sedition acts in this country.  It never changes.  I envision Russel getting his lesson the hard way; like the mayor of Calumet, Colorado.

Russell,   If your real concern is illegal immigration why not write a bill to fund the minute men project and stop them from coming across the border rather than turning Arizona into a police state?

I too have been to funerals. A good friend of my wife's (Wade Jordan) was gunned down in cold blood in 2001 in the middle of the street by 7 members of a well known Mesa gang. They were seen wearing dark cloths and shinny badges. They often called themselves the Mesa Police Department. This is what happens when you indemnify people from self responsibility.

Nothing like using your taxpayer funded email system at the Senate to email out a letter with your campaign donation web site link in it...even if he did manage to F it up. ;-)  Some might say that violated the law.  But not me.  Sen. Pearce never saw a law he couldn't ignore.