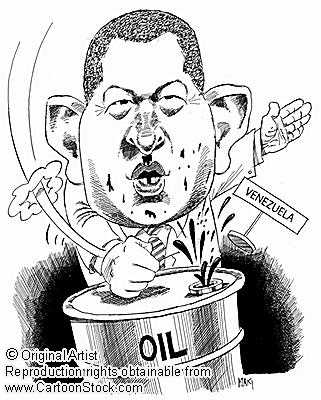 Washington fears Hugo Chavez for good reason. His "good example" threat raises concerns that other regional leaders may follow. As a result, throughout his tenure, he's been targeted and vilified - to discredit, weaken and undermine his government to destroy Bolivarian benefits millions of Venezuelans now enjoy, won't easily give up, nor should they.

-- April 2002 for two days, an effort aborted by mass street protests and support from many in Venezuela's military, especially from the middle-ranking officer corp;

-- the 2002 - 2003 general strike and oil management lockout, causing severe economic disruption and billions of dollars in losses; and

-- the August 2004 national recall referendum that Chavez won overwhelmingly with a 59% majority.

Thereafter, disruptions regularly followed to help domestic and US oligarchs regain what they lost, so far without success, but they persist, with supportive editorial, op-ed, and on-the-ground reporting. Also from an Organization of American States (OAS) report, the Vision of Humanity's annual Global Peace Index (GPI), US State Department, and Pentagon.

His government "continue(s) to have a very anti-US stance and look(s) to try and restrict US activity wherever they have the opportunity to do that. (It's) continuing to engage with the region....and continuing to pursue (its) socialism agenda. (It) remain(s) a destabilizing force in the region."

"We have not seen any connections specifically that I can verify that there has been a direct government-to-terrorist connection" between Chavez and either the FARC-EP or the Basque separatist group ETA. "We have continued to watch very closely for any connections between illicit and terrorist organization activity within the region. We are concerned about it. I'm skeptical. I continue to watch for it," but as yet haven't found it.

Released on March 11, it followed earlier ones, bogusly accusing Chavez of:

-- targeting the media; and

-- corruption and impunity in police forces;

-- a corrupt, inefficient, and politicized judicial system characterized by trial delays and violations of due process;

-- government closure of radio and television stations and threats to close others;

-- systematic discrimination based on political grounds;

-- considerable corruption at all levels of government;

-- threats and attacks against domestic NGOs;

-- trafficking in persons; and

-- restrictions on workers' right of association."

Other charges have included drugs trafficking and ties to bogusly designated "foreign terror organizations" like the FARC-EP and ETA.

These sham charges and similar ones repeat regularly to discredit and undermine Chavez. Ironically, they're more descriptive of American domestic and foreign policies - ones that defy US and international laws with regard to human and civil rights, equal justice, war, occupation, domestic tranquility, and the Constitution's Article I, Section 8 for the Congress to "provide (for) the general welfare of the United States," the so-called welfare clause applying also to the Executive and judiciary.

Ones as well from a recent OAS report titled, "Democracy and Human Rights in Venezuela," produced under the mandate of the Washington-based Inter-American Commission on Human Rights (IACHR).

Among others, its bogus accusations include:

-- no independent separation among government branches;

-- state punitive power to "intimidate or punish people on account of their political opinions;"

-- disempowering opposition politicians through legal and other means;

-- intimidating and punishing dissent against official policy through harassment, violence, and criminal proceedings;

-- the absence of an independent, impartial judiciary; and

-- numerous other charges like the US State Department's, more descriptive of America, suggesting a hidden motive behind the report's issuance; perhaps also its timing, two weeks before the State Department's similar accusations.

Chavez called it "pure excrement....ineffable (and) ignominious" in denouncing the IACHR as "menacing....a true mafia and is part of the OAS, which is why one of these days this organization must disappear....It is the same Commission which backed (the de facto government of Pedro) Carmona" after the April 2002 coup. "But this is part of the attacks, of continued threats against the Bolivarian Revolution, (a) continued campaign (supported by Venezuelan and American oligarchs to) isolat(e) Venezuela."

OAS history is long and shameful in deference to US interests.

Throughout its history, the OAS "made democracies ungovernable, turned them into dictatorships, and when they were no longer useful, reconverted them into even more diminished and servile democracies, because in the new, neoliberal era, with transnationalized oligarch(ic) capital, they were part of a much more sophisticated power structure, whose bases were not necessarily located in the presidential palaces or parliaments, but in continental corporations."

OAS nations had decades of "involvement with death, genocide and lies for (it) to survive these times. It is a political corpse and should be buried as soon as possible....The reality is, without the OAS, the United States would lose one of its principle political/legal instruments of hegemonic control over the Western Hemisphere."

In February 2004, Washington got its backing to justify ousting Haiti's President Jean-Betrand Aristide. Then in 2009, it abstained from strong actions after Honduran President Manuel Zelaya was deposed, opting instead for symbolic toothless measures. It's new report reveals transparent support for bogus US charges, not Venezuela's participatory democracy, largely absent in the region and unimaginable in America where Washington is corporate controlled territory, and popular interests go unaddressed.

Launched by Australian entrepreneur, Steve Killelea, in May 2007, it claims to be the first study of its kind ranking nations according to peacefulness, identifying key peace drivers. Its initial report included 121 countries, increased to 140 in 2008 and 144 in its latest 2009 report, released in June last year.

Its problematic endorsers include:

-- Kofi Annan, infamous as UN Secretary-General for backing US imperial wars while ignoring the plight of oppressed Africans and others globally;

-- an array of prominent current and past political and diplomatic figures;

-- numerous academics; and others.

Organizations preparing GPI's report and/or responsible for its data include:

-- the Economist Intelligence Unit (founded by a former UK director of intelligence), calling itself "the world's foremost provider of country, industry and management analysis" since 1946;

-- the London-based International Institute of Strategic Studies (IISS), calling itself "the world's leading authority on political-military conflict" with 450 corporate and institutional members.

The world was less peaceful in 2008, according to GPI, reflecting intensified conflicts and the effects of rising food and fuel prices at a time of global economic crisis, impacting employment, incomes, savings, and for many shelter, enough to eat, and the ability to survive.

GPI used 23 indicators to measure the level or absence of peace, divided into three broad categories, including:

-- safety and security in society; and

Scores were then "banded, either on a scale of 1 - 5 (for qualitative indicators) or 1 - 10 (for quantitative data, such as military expenditure or the jailed population, which have then been converted to a 1- 5 scale for comparability when compiling the final index)."

-- estimated number from internal ones;

-- perceptions of criminality in society;

-- number of displaced people as a percentage of population;

-- level of disrespect for human rights;

-- number of internal security officers and police per 100,000 population;

-- military expenditures as a percent of GDP;

-- ease of access to small arms and light weapons; and

-- the level of military capability.

Venezuela ranked an implausible 120th behind Yemen, Haiti, Iran, Honduras, Uzbekistan, Uganda, Rwanda, and dozens of other unlikely choices. America was 83rd, despite hands down being the world's most violent lawless state, directly or through global proxy wars for unchallengeable world dominance.

In contrast, Venezuela is democratic and peaceful, except during periods of Washington-instigated disruptions. America alone endangers global stability and world peace, waging permanent wars, targeting peaceful nations, and claiming the unilateral right to use first strike nuclear weapons preemptively. It also maintains over 1,000 bases and many secret ones in over 130 countries. Its annual military budget tops all other nations combined - way over $1 trillion plus tens of additional billions for intelligence and black operations, mostly for covert destabilization.

In contrast, Chavez seeks regional and global alliances; engages foreign leaders cooperatively; assassinates no one internally or abroad; has no nuclear weapons or seeks them; spends less than one-half of one percent of the Pentagon's official budget; doesn't export weapons to neighbors; is socially responsible at home; has no secret prisons; respects the rule of law; is a model participatory democracy; governs peacefully; supports civil and human rights and social justice; affirms free expression; bans discrimination; and uses Venezuela's resources responsibly - for people needs, yet is friendly to business at home and abroad.

Nonetheless, GPI ranks it below America in human and civil rights, level of organized internal conflict, relations with neighboring countries, potential for terrorist acts, level of violent crime, political instability, perceptions of criminality in society, ease of access to small weapons, freedom of the press, political democracy, adult literacy (way above the US Department of Education's assessment), and willingness to fight.

Transparency International (TI) also rates Venezuela low in its 2009 Corruption Perceptions Index (CPI), indicating the perceived level of public sector corruption by country, claiming a 90% confidence of accuracy. It ranks America implausibly high at 19th and Venezuela outrageously low at 162nd out of 180 countries, behind notoriously corrupt states, including corporate occupied Washington, siphoning trillions of public dollars to private hands as part of the greatest ever wealth transfer.