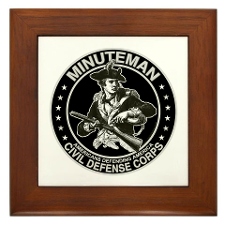 The following is an email that was sent out to all supporters on the Minutemen's email tree.
Message from
Minuteman Civil Defense Corps
President Carmen Mercer
Freedom is never Free!
URGENT ALERT TO ALL MINUTEMAN

The so-called elites, you know the ones who criticized us for not
showing respect to our government in Washington have managed to
trample the Constitution, completely against the will of the people
they have passed Obamacare.

Don't think the millions of people who nationwide, marched against
this criminal act, just as the Minutemen marched on the border and in
cities across the country to bring awareness to a most serious issue.
Some people thought it made a difference, others did not. We know we
had an effect and the credit goes to all our courageous and
disciplined volunteers who have always behaved like Americans should.

Only now the mood of the country has changed. I'm afraid that for many
citizens, the passing of health care against the will of the people
and now indications that Obama will try to pass amnesty may be the
straw that will break the spirit, or may be the straw that ignites
frustration that we, as an organization, may not be able to manage or
contain.
Recently I sent out an email announcing a renewed call to arms to the
border just as Chris Simcox did way back in October, 2002.
The replies to my e mail were dramatic and has shown me that people
are fed up. Thousands opened the e mail, hundreds replied and are
ready. The response was dramatic in two ways; some people were
absolutely against our new SOP that I encouraged Chris to write for
us. He was reluctant but pitched in to help support my plans. For
others the response was overwhelmingly positive, in fact we had far
more people respond than in a long time. But it was obvious that many
had decided to return to the border who had tired of the sometimes
futile watch and observe methods. It showed me that people are not
willing to be silenced anymore; it also showed me that people will be
less likely to follow the rules of engagement in a desperate attempt
to stop the criminals who violate our borders every day.
That is not what we want and we cannot take the reponsibility for this.
This has brought me to the conclusion that the anger may not be
directed by every individual against their government; I realize
people have HAD IT!
We have a responsibility to protect our volunteers, our corporation
and the land owners who have been so supportive of our efforts, even
under great risk of liability if we ever made a mistake.
We cannot and will not jeopardize all the years of positive activism
we have shown over the last 8 years. We will also not jeopardize the
gracious help we have received from the ranchers who have supported us
in the last 8 years.
So with this email I announce that as MCDC, we will no longer hold a
border muster.

We are dissolving the corporation.

I tried to encourage Chris to return and manage the operation but he
is committed to supporting JD Hayworth's campaign for the U.S. Senate.
I have a business to run and cannot be there enough to oversee the
operation. Without a leader and a full time staff of sector chiefs to
supervise, I cannot take the liability and will not put the landowners
in that position.

This organization has grown too big for its own good; or rather, the
problem has grown too big and serious for us to manage.
I predict soon the violence will spill over the border (it already is)
and I predict Americans, on their own, will lock, load and do what the
feckless cowards in Washington refuse to do - and frankly I hope
Americans do take up arms to defend this great nation.

Simply put, we have taught thousands of people what they should do;
now it is up to them to do it. We are all Minutemen now but we are no
longer on the border as MCDC, that corporationwill no longer exist,
except in the history books.


It is up to each individual now, you will do what you personally feel
is right. You may still go to the border but you are either on your
own or you can try to find another group to associate with - you do so
at your own risk. I hope you continue as independent Minutemen, you
are needed; we are needed to save this country.


For those who are awaiting your I.D. cards I will still at my own
expense make sure you all receive your cards, at least as mementos of
our efforts. The equipment and resources still belong to the
corporation and must be collected and accounted for.

I will then sell off the assets to pay off our remaining expenses.


It has been an amazing experience and I remain humbled and honored by
your dedication and service. I am sure Chris Simcox does too.


He may be disappointed that we as the board have made this decision,
but I have always respected his choices and he has always supported
mine. I was there with Chris from the beginning so we both deserve
the respect and credit for getting us this far. We are both
tremendously honored by those who served. History is again in our
hands; your hands; you know what to do - the rest is up to you.

In God we trust, and may God give strength to the American people to
fight for the survival of this great Republic.

In Liberty
Carmen Mercer
and the Board of MCDC

5 Comments in Response to Fearing its members can no longer contain themselves and the liability thereof, Minutemen disolve

Another arena would be to boycott the businesses that hire illegal immigrants. We could start with one fast food restaurant at a time while supporting family-owned businesses. Also, begin to bring attention to the H1 visa program which take away well paying jobs.

Oyate counts one ZING! for the Brockster

It is about to hit the fan. People are pissed!

I've got $10 on "Aryan Brotherhood decides to hold the muster anyway and the same people show up."

We Found All the Baby Formula . . . Biden Admin Sent it all to Southern Border...

Revolver Exposes How the Ministry of Truth Plans to Hide Immigration Failures...