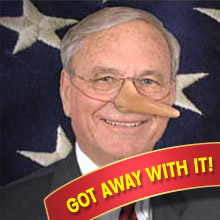 Thank you for contacting me regarding health insurance reform legislation, H.R. 4872.  I appreciate you sharing your thoughts with me on this important issue.

After more than a year of hearing from health care professionals, insurers, patients, and tens of thousands of passionate and concerned Arizonans both for and against reform, it has become clear to me that we cannot sustain the path that we are on.  Rapidly rising health care costs are burdening Arizona families, hurting the economy, and slowing our recovery.

Small businesses, which make up 73 percent of Arizona's businesses, are facing a full-blown crisis.  Since 2000, health-insurance premiums for small businesses have risen 130 percent, and insurers are warning that they will go up another 15 percent this year.  In other words, a premium that cost $4,500 per employee in 2008 - and $4,800 last year - will cost $5,500 per employee this year.  As a result, employers are being forced to choose between hiring workers and paying for health insurance costs.

At the same time, families who have insurance, and are already struggling with skyrocketing premiums, are being forced to pay a hidden tax to pay for those without insurance who show up at emergency rooms and get treated despite their inability to pay.  It is estimated that the average American family is already paying an extra $1,100 a year in premiums to pay for costs associated with treating the uninsured, a cost that will only continue to grow.

After more than a year of careful review, I believe that this legislation will address many of the key issues plaguing our current health care system.  While I understand that this package is not perfect and I don't approve of some of the procedures that were proposed to advance the bill, I strongly believe that the status quo is unsustainable and the time for reform is now.

While I have been heartened by the many thoughtful questions, comments and suggestions I have received over the course of this debate from both sides, as a former high school government teacher, I have been extremely disappointed by much of the extremist rhetoric and blatantly false statements that some have injected into this discussion.  The use of swastikas does not help foster a civil discussion on a serous issue, nor does it honor the memory of the millions victims who died in concentration camps.  But perhaps even more insidious, millions of dollars have been spent to spread misconceptions about what reform will mean, ultimately distracting many from engaging in meaningful conversations.

I would like to take this opportunity to briefly explain what reform would mean for you and clear up some of the most egregious rumors about reform.  For more detailed information, I encourage you to visit my web site at: www.mitchell.house.gov.

For individuals with insurance, including the 469,000 residents of Arizona's Fifth District who currently receive health care coverage from an employer, this legislation will enable you to keep it, and prevent your insurer from dropping you if you get sick.   It will also require insurers to allow young adults, up to 26 years of age, to remain on their parents' health care plans if they so choose.

The legislation will also ultimately slow the rapidly accelerating growth of insurance premiums by spurring greater competition between health insurers and offering more choice to consumers.  Specifically, the legislation will establish insurance exchanges through which businesses and individuals can comparison shop for insurance policies that best meet their needs.  While more complex, these exchanges would function, in a sense, like the system many travelers currently use to purchase airline tickets online.  Just as the airlines bid for your travel business, health insurers will bid for your insurance business.

To participate in an exchange, insurers will have to meet certain minimum standards.  Most notably, insurers will no longer be allowed to refuse to cover someone because of a pre-existing condition, or place a cap on annual or lifetime coverage.  Members of Congress and federal employees have long had access to a system like this, and it has worked well.  So well, in fact, that Congress is frequently, and I believe correctly, criticized for giving itself better quality and more affordable health care than countless Americans.

Furthermore, this package will improve and strengthen Medicare for seniors that have been squeezed by rising costs of care and prescription drugs.  So much so, the bill has been endorsed by the American Association of Retired Persons (AARP).   Among other things, the legislation will fill the "donut-hole" in Medicare Part D, the prescription drug benefit, helping the 10,100 seniors in  Arizona's Fifth District who are forced to pay full drug costs because they fall into it.  The legislation would further improve Medicare by eliminating out-of-pocket expenses for preventative services in Medicare. This package does not, as some have alleged, weaken Medicare. As someone who is over 65 and depends on Medicare myself, I would not vote for it if it did.

The package does not contain any so-called "death panels" or government takeovers of health care.  It does not contain a public option, does not dismantle the private insurance industry, and does not provide benefits for illegal immigrants.  In fact, the legislation explicitly prohibits illegal immigrants from receiving health insurance. The package also maintains the current ban on federal funding for abortion, and maintains TRICARE for veterans.

According to the nonpartisan Congressional Budget Office (CBO), the bill would reduce federal budget deficits by $138 billion from 2010 - 2019 and by $1.2 trillion over the next decade.  CBO's analysis is available online at: www.cbo.gov.

The reconciliation package that was approved by the House in conjunction with the underlying health care legislation addresses several of the concerns I had with the Senate bill.  Specifically, it closes the prescription drug donut hole for seniors, and eliminates special deals like the "Cornhusker Kickback."  Moreover, in the wake of the state legislature's decision to kick kids off state health insurance -- risking billions in federal matching funds and killing over 42,000 jobs -- the legislation will help Arizona bridge its budget gap by providing it with an additional $2.5 billion for Medicaid funding.

Finally, I have received a number of inquiries about tort reform and the ability to purchase insurance across state lines.  While these are primarily issues of state law, the reform package will allow the federal government to play a constructive role for states that are interested in pursuing either of these ideas.  Under the legislation, states will be able to enter into agreements to facilitate the purchase of coverage across state lines.  Reform will also provide incentives to states to create pilot tort reform programs.  I would encourage those interested in reforming Arizona's tort laws to contact their state legislators as well as the Governor.

Again, thank you for taking the time to write.  For more information about this issue, I invite you to visit my web site at www.mitchell.house.gov.

I've decided that I'm not going to drink water any more. Once a week, I'll go to the hospital and get an IV for dehydration. After a few weeks, they'll be all "Hey, you should prolly, like, drink water sometimes." And I'll be all "Whatever! I don't need to! You drink my water, jerk!"

Now that got my Obama insurance where do I go to get my Obama money, I know he has it in his stash? I need to get me some "Sit on my ass" pants and a "I don't have to work" shirt to go hang out with my friends. I'm looking good !