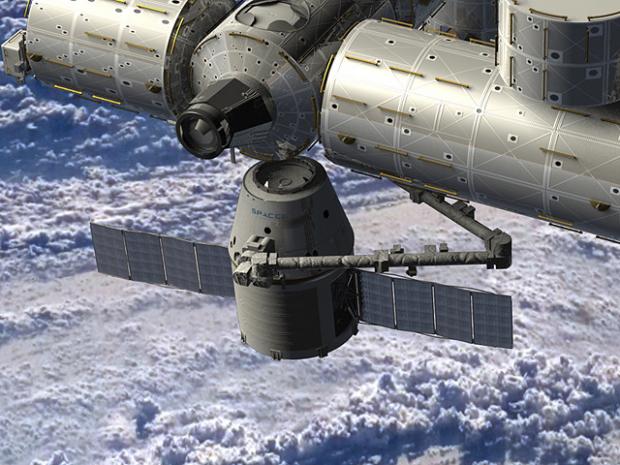 Space Shuttle Atlantis delivered the system hardware to the ISS during mission STS-129 in November 2009. The on-orbit checkout began January 25, 2010, when astronaut Jeff Williams, ISS Expedition 22 Commander, worked with ground-based team members at SpaceX headquarters and ISS mission control in Houston to power-up and check out the new system.

On March 11, SpaceX and NASA Houston performed an additional series of tests, using the new system to send communications between the ISS and the NASA Dryden ground station. This provided a baseline of the radio frequency performance and confirmed the first set of antennas performed as expected and is ready for mission operations. Additional testing is expected for a second set of antennas as well as ongoing verification of the overall system.

"The success of this series of tests speaks to our close collaboration with NASA as well as the SpaceX process that allowed the rapid development of this new hardware," said Marco Villa, SpaceX Mission Operations Manager. "Furthermore, the January tests marked the first official joint operations between SpaceX Mission Control in California, and NASA Mission Control in Houston. Everything went smoothly, and we eagerly anticipate the upcoming Dragon visits to the ISS."

Developed by SpaceX under a NASA Space Act Agreement, the new system allows for communication between the ISS and SpaceX's Dragon spacecraft while in the vicinity of the ISS. Its design leverages the abilities of the ISS communication systems, providing data exchange with ground-based mission control.

Designed from the beginning to transport crew, SpaceX's Falcon 9 and Dragon spacecraft were selected by NASA to transport cargo to and from the ISS starting in 2011. The $1.6B contract represents 12 flights for a minimum of 20 tons to and from the ISS. The first demonstration flights under the COTS program are scheduled for 2010, following the inaugural launch of SpaceX's Falcon 9 rocket.

SpaceX is developing a family of launch vehicles and spacecraft intended to increase the reliability and reduce the cost of both manned and unmanned space transportation, ultimately by a factor of ten. With the Falcon 1 and Falcon 9 vehicles, SpaceX offers highly reliable/cost-efficient launch capabilities for spacecraft insertion into any orbital altitude and inclination. Starting in 2010, SpaceX's Dragon spacecraft will provide Earth-to-LEO transport of pressurized and unpressurized cargo, including resupply to the International Space Station.

Founded in 2002, SpaceX is a private company owned by management and employees, with minority investments from Founders Fund and Draper Fisher Jurvetson. The SpaceX team now numbers more than 900, with corporate headquarters in Hawthorne, California. For more information, please visit the company's web site at www.spacex.com.