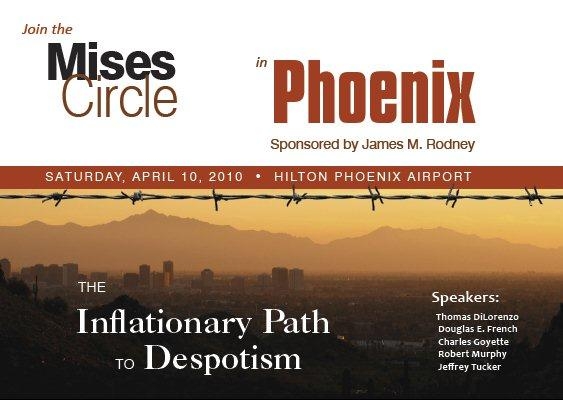 Join Charles Goyette and a distinguished panel of Mises Institute scholars on Saturday, April 10 for a presentation entitled "The Inflationary Path to Despotism."

From Ancient Rome through modern-day America, money inflation has been the means by which the state extracts wealth without recourse to taxation.

Such a monetary policy leads to gutting savings, punishing investment, and the launching of economic cycles and even soaring prices and banking disasters. But perhaps the greatest cost is in human liberty itself. The intellectual tragedy here is that few make the connection between the quality of money and the rise of despotism.
The prospect of hyperinflation in our future is the great horror that awaits us on the current path. It will not only mean death to the dollar but the rise of a ghastly statism.

This Mises Circle is devoted to exploring the relationship and providing a path toward permanent freedom. Admission is $85 per person and this includes lunch. Through the generosity of James M. Rodney, each attendee will receive a complimentary copy of Henry Hazlitt's The Inflation Crisis and How to Resolve It.

Speakers will include:
Douglas French, president of the Ludwig von Mises Institute and the author of Early Speculative Bubbles & Increases in the Money Supply. He received his masters in economics from UNLV; Dr. Murray Rothbard was on his thesis committee.
Thomas DiLorenzo, economics professor at Loyola University Maryland; He is a senior faculty member of the Ludwig von Mises Institute; DiLorenzo has authored at least ten books, including The Real Lincoln: A New Look at Abraham Lincoln, His Agenda, and an Unnecessary War, Hamilton's Curse: How Jefferson's Arch Enemy Betrayed the American Revolution--and What It Means for Americans Today, How Capitalism Saved America: The Untold History of Our Country, From the Pilgrims to the Present.
Jeffrey Tucker, the editorial vice president of the Mises Institute and the current webmaster for the institute's website, Mises.org. Tucker is also an adjunct scholar with the Mackinac Center for Public Policy and an Acton University faculty member.
Robert Murphy, an adjunct scholar of the Mises Institute and a faculty member of the Mises University, runs the blog Free Advice and is the author of The Politically Incorrect Guide to Capitalism, the Study Guide to Man, Economy, and State with Power and Market, the Human Action Study Guide, and The Politically Incorrect Guide to the Great Depression and the New Deal.
And Charles Goyette will be speaking about the command economy, a subject to which is featured in his book, the New York Times bestseller The Dollar Meltdown. A top-down, state-directed command economy is advancing on every front, visibly in areas like health care that get a great deal of media attention, and below the radar in things like capital controls.
Please join The Mises Circle on Saturday, April 10 at the Phoenix Sky Harbor Hilton Hotel, and bring along those who you feel need exposure to Austrian school economics, the Mises Institute, and some insightful discussion of our critical economic times.
For more information, to register, and to find out about special scholarship registration for students, go to the Mises Institute at http://mises.org/events/127.