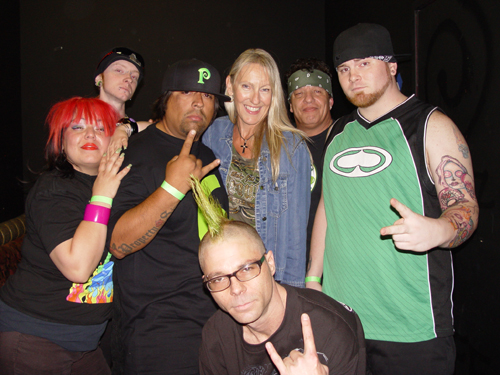 M4F Featured Musicians, Property Six, performed on March 13, 2010 at Smoke Phatties Day III in Phoenix, AZ. This video was shot in the green room at The Clubhouse in Phoenix, AZ. Bands on stage can be heard performing in the background. Josh from Property Six characterizes himself as a “fanatic” Ron Paul supporter, and his band members characterize themselves as “fanatic Ron Paul supporter supporters.” Josh, Baybay, Lady Bug, Danny, and Red agree that Ron Paul and Jesse Ventura would be killer in 2012.

Baybay says, "Beware of mind control...." Josh says, "Never doubt that a few people can make change because indeed it's the only thing that ever has...." Don't forget....when "they" talk about green, "marijuana" is the Property Six band's recommended response! Visit Indy Music Phoenix to hear Lady Bug's show.

Ricky G. is looking forward to bringing back freedom and restoring the constitution. How? Ask questions....educate yourself!

Don't be afraid of the truth, boys and girls.

Ah, this brings back memories:

'This Has Gotta Stop':

What Year Is It?

I Wish (Men Would Be Men Again) - Dean Facey