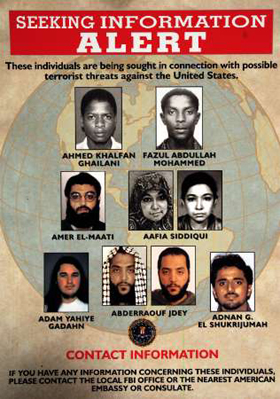 On February 3, 2010, after a sham trial, the Department of Justice announced Siddiqui's conviction for "attempting to murder US nationals in Afghanistan and six additional charges." When sentenced on May 6, she faces up to 20 years for each attempted murder charge, possible life in prison on the firearms charge, and eight years on each assault charge.

In March 2003, after visiting her family in Karachi, Pakistan, government Inter-Services Intelligence (ISI) agents, in collaboration with Washington, abducted Siddiqui and her three children en route to the airport for a flight to Rawalpindi, handed them over to US authorities who took them secretly to Bagram prison, Afghanistan for more than five years of brutal torture and unspeakable abuse, including vicious beatings and repeated raping.

Bogusly charged and convicted, Siddiqui was guilty only of being Muslim in America at the wrong time. A Pakistani national, she was deeply religious, very small, thoughtful, studious, quiet, polite, shy, soft-spoken, barely noticeable in a gathering, not extremist or fundamentalist, and, of course, no terrorist.

She attended MIT and Brandeis University where she earned a doctorate in neurocognitive science. She did volunteer charity work, taught Muslim children on Sundays, distributed Korans to area prison inmates, dedicated herself to helping oppressed Muslims worldwide, yet lived a quiet, unassuming nonviolent life.

Nonetheless, she was accused of being a "high security risk" for alleged Al-Qaeda connections linked to planned terrorist attacks against New York landmarks, including the Statue of Liberty, Brooklyn Bridge and Empire State Building, accusations so preposterous they never appeared in her indictment.

The DOJ's more likely interest was her supposed connection, through marriage, to a nephew of Khalid Sheikh Mohammed (KSM), the bogusly charged 9/11 mastermind who confessed after years of horrific torture. US authorities tried to use them both - to coerce KSM to link Siddiqui to Al-Qaeda, and she to admit his responsibility for 9/11 - something she knew nothing about or anything about her alleged relative.

Her trial was a travesty of justice based on the preposterous charge that in the presence of two FBI agents, two Army interpreters, and three US Army officers, she (110 pounds and frail) assaulted three of them, seized one of their rifles, opened fire at close range, hit no one, yet she was severely wounded.

No credible evidence was presented. Some was kept secret. The proceedings were carefully orchestrated. Witnesses were either enlisted, pressured, coerced, and/or bought off to cooperate, then jurors were intimidated to convict, her attorney, Elaine Whitfield Sharp, saying their verdict was "based on fear, not fact."

Awaiting her May 6 sentencing, Siddiqui is incarcerated in harsh maximum security solitary confinement at New York's Metropolitan Detention Center (MDC), denied all contact with friends and family, no mail or reading materials, or access to her previously allowed once a month 15 minute phone call to relatives.

In February 2010, Muslim women in America, Britain, Canada, and Australia united in outrage over Siddiqui's treatment and bogus conviction, demanding her release and exoneration.

March 28 was the seventh anniversary of her abduction, commemorated by a global day of protest, JFAC saying it was "to have events, demonstrations, letter-writing campaigns, khutbahs (sermons or public preaching), etc. in towns and cities all over the world in solidarity with Aafia" - for justice, against sadism and barbarity against an innocent woman, guilty of being a target of opportunity, not crimes she didn't commit.

JFAC published a transcript of the March 26 Kamram Shahid-conducted Pakistan Front Line TV interview with Siddiqui family members, including her mother, Ismat, sister, Fowzia, and young son, Ahmed, who asked "why have they imprisoned her and why did they imprison me?" In response to whether he'd like to give his mother a message, he said:

"I love you and I am waiting for you (to) come back soon, if Allah permits."

Ismat confirmed some of Aafia's torture in shocking detail, saying:

She endured a lot, some of the worst of it including "six men....strip(ping) her naked. All her clothes would be removed. She told this to the Pakistani senators too, that they would strip her naked, then tie her hands behind her back, and then they would take her, dragging her by the hair. You cannot imagine the cruelty they have done to her. They would take her like this to the corridor and film her there."

"After that, they observed that she would read the Qu'ran, from memory and from the book. They again would send six, seven men, who would strip her naked and misbehave etc. They took the Qu'ran and threw it at her feet and told her that only if you walk on the Qu'ran will we return (it) to you. She would cry and shout that she would not do it. Then they would beat her with their rifle butts so much that she would be bloodied. All her face and body would be injured. Then they used to pull out her hair one by one, just like this....They threatened (to) take her to the court like this, naked."

After "beat(ing) her so much that she bled....they made her lie on a bed. Then they tied her hands and feet - hands and feet both tied so that she (could) not even... scratch her wounds. Then they applied torture to the soles of her feet and head. They put her in some machines to make her lose her mental stability. They gave her such injections on the pretext of medical treatment." When she pleaded not to do it, "they would make her unconscious and then give them to her. Such is (their) cruelty."

"This epic cruelty - and look at (the) Islamic world....They are all silent and making their palaces in Hell....She was not even a criminal in their law. And she has done no crime. They did not accuse her of terrorism. She is not a terrorist."

Her sister Fowzia said "It is all on tape. I am not making this up. They are sadists or whatever. All the strip searching was video-taped. (She called Aafia) a poster child for this torture and rendition," one of many others brutalized in American prisons. Court testimony revealed that her children were also tortured, Ahmed later released on condition he say nothing, two still missing and presumed murdered. "I think even Genghis Khan did not do this," said Fowzia.

In an August 2008 address to Pakistan's Senate, Fowzia explained that "Aafia (can't) get justice in the US....They are sure to make her out to be a major terror figure to mask the five years of torture, rape and child molestation as reported by human rights groups."

Her case is much more important than "my sister or one woman. Her torture is a crime beyond anything she was ever accused of (which was basically nothing) and this is a slap on the honor of our nation and the whole of humanity. The perpetrators of those crimes are the ones who need to be brought to account. That is the real crime of terror here."

Fowzia appealed for Aafia's extradition to Pakistan, despite little hope of expecting a government complicit in crime to cooperate beyond rhetoric. At first, it denied knowledge, then, after meeting with family, interior minister Faisal Saleh Hayat and other officials promised to work for her release, still denying complicity for what happened.

Because her ordeal sparked nationwide protests, Pakistan's government is in damage control, apparently wants to shift blame to Washington, investigating officer Shahid Qureshi, in a report to the judicial magistrate, saying "FBI intelligence agents without any warrants or notice" committed the abduction - knowing full well about ISI's complicity.

During conflnement, the Human Rights Commission of Pakistan said Siddiqui had a kidney and her teeth removed. Her nose was broken and not properly set. Her gun shot wound was improperly treated. Reuters reported that she lost part of her intestines and still bleeds internally from poor treatment. Those around her notice she's deathly pale because of extreme trauma and pain.

After years of horrific torture and abuse, a federal Bureau of Prisons psychological evaluation diagnosed her condition to be "depressive type psychosis" besides the destructive physical toll on her body.

The Muslim Justice Initiative (MJI) said Siddiqui's "recent guilty verdict....shocked and outraged masses across the globe" in announcing an April 2 online webinar discussion on her behalf, featuring her brother Mohammed, sister Fawzia, noted UK journalist and Siddiqui advocate Yvonne Ridley, and Tina Foster, Executive Director of the International Justice Network (IJN). Information on the event can be found at muslimsforjustice.org.

It "represents the family of Dr. Aafia Siddiqui in the United States," its attorneys "monitoring her trial, which began on January 19 and ended with a guilty verdict today in US Federal Court in the Southern District of New York."

"Today marks the close of another sad chapter in the life of our sister, Dr. Aafia Siddiqui. Today she was unjustly found guilty. Though she was not charged with any terrorism-related offense, Judge Berman permitted the prosecution's witnesses to characterize our sister as a terrorist - which, based on copious (exculpatory) evidence, she clearly is not. Today's verdict is one of the many legal errors that allowed the prosecution to build a case against our sister based on hate, rather than fact. We believe that as a result, she was denied a fair trial, and today's verdict must be overturned on appeal."

Himself victimized by US torture, including at Bagram, author of "Enemy Combatant: A British Muslim's Journey to Guantanamo and Back," Moassam Begg (like others), called Aafia "the Grey Lady of Bagram because she (was) almost a ghost, a spectre whose cries and screams continue to haunt those who heard her." So much so that for six days in 2005, male prisoners staged a hunger strike in protest.

After sentencing, her next journey may be to isolated life confinement in federal Supermax hell - according to the US Department of Justice National Institute of Corrections, intended for the most dangerous criminals, guilty of "repetitive assaultive or violent institutional behavior," the worst of the worst who threaten society or national security.

Hardly the place for a woman called shy, soft-spoken, deeply religious, polite, studious, thoughtful, and considerate of others, especially persecuted Muslims being brutalized in America's global gulag, courtesy of an administration that pays lip service to ending torture but practices it as sadistically as George Bush and the worst of history's tyrants.