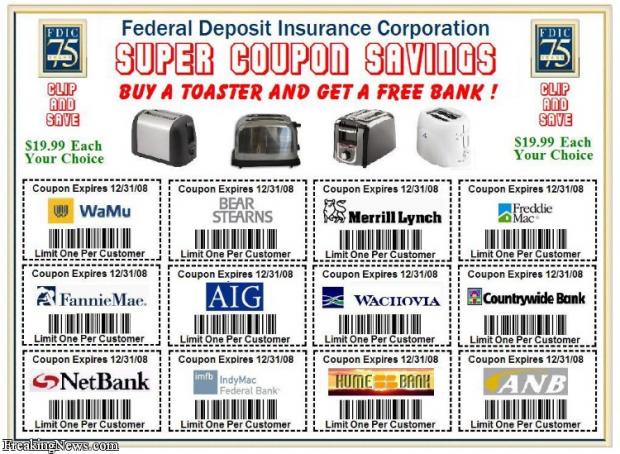 In Washington, the more things change, the more they stay the same, or usually get worse. It's true each election cycle, and when Congress enacts "reform," watch out.

Financial reform, shaping up to be more business as usual, masquerading as change, and leaving what's needed unaddressed and papered over.

What Real Reform Looks Like - Abolish or Nationalize the Fed

For many years, Ron Paul waged a lonely struggle to abolish the Fed, trying and failing in the 106th, 107th, 108th, and 110th Congresses. Numerous times he explained what he said on the House floor on September 10, 2002, namely:

"Since the creation of the Federal Reserve, middle and working-class Americans have been victimized by a boom-and-bust monetary cycle. In addition, most Americans have suffered a steadily eroding purchasing power because of the Federal Reserve's inflationary policies. This represents a real, if hidden, tax imposed on the American people," a 1913 dollar (when the Fed was created) today worth about a nickel and continues to erode.

Under the Fed, we've also had rising consumer debt; record budget and trade deficits; an unsustainable national debt; a high level of personal and business bankruptcies; millions of lost homes; high unemployment; loss of the nation's manufacturing base; soaring poverty levels; an unprecedented wealth gap between the rich and most others; and a hugely unstable economy lurching from one crisis to another, the current one near-catastrophic with years more pain and suffering ahead for growing millions.

Yet the 1913 Federal Reserve Act violates the Constitution's Article I, Section 8 giving Congress sole power to coin (create) money and regulate the value thereof. In 1935, the Supreme Court ruled that Congress can't constitutionally delegate it to another body.

Yet, as financial writer Ellen Brown explains, Federal Reserves Notes comprise about 3% of the money supply, the remainder created by private banks through loans. When made, the money supply expands. When repaid it contracts unless equal or greater loan amounts are made. Today, they're not, so credit is contracting precipitously.

The founders wanted gold and silver as legal tender, not fiat money or a central bank, President Andrew Jackson calling the Bank of the United States (the Fed's equivalent in his day) a "hydra-headed monster."

Under the Fed, America's monetary system combines money, credit and debt into a dishonest system of empty promises in exchange for future ones, new generations forced to pay increasingly greater amounts for today's excesses, a process designed to suck maximum public wealth into elitist private hands.

Privatized money control is the single greatest threat to democracy. Since 1913, Wall Street bankers have incrementally stolen it in collusion with corrupted officials, modern day ones crafting fake financial reform to end the little that's left and extract as much more public wealth as possible.

"To establish the Consumer Financial Protection Agency, and for other purposes."

"To provide for financial regulatory reform, to protect consumers and investors, to enhance Federal understanding of insurance issues, to regulate the over-the-counter derivatives markets, and for other purposes."

It was rushed through committees, then passed on December 11.

"A bill to prohibit certain affiliations (between commercial banking and investment banking companies), and for other purposes."

It was referred to committed and not voted on.

On March 15, the Senate introduced the Restoring American Financial Stability Act of 2010:

"To promote the financial stability of the United States by improving accountability and transparency in the financial system, to end 'too big to fail,' to protect American taxpayers by ending bailouts, to protect consumers from abusive financial services practices, and for other purposes."

-- regulatory power "should be independent and out of the Federal Reserve;" the Fed is the problem, not the solution;

-- everything in House (and Senate bills) has loopholes, so "won't do the job;"

-- as the lender of last resort, it "causes moral hazard," investors believing it "will be there to pick up the pieces," but people end up getting stuck;

-- when banks get in trouble, "we shouldn't have to have taxpayers liable to bail out all these people;"

-- real financial reform involves changing the Fed; "when you allow a secret bank like the Fed to create money out of thin air, you" encourage irresponsibility; the House and Senate bills do precisely that and won't work.

They're essentially old wine in new bottles, masquerading as reform. If enacted, the public again will be scammed.

On March 22, the Senate Banking Committee passed the Financial Stability Act 13 - 10 (along party lines), and sent it to the floor for debate.

Announced on June 17, 2009, it's a plan to create new government agencies, more greatly empower the Fed, and address major problems problems. Its objectives include:

-- provid(ing) the government with the tools it needs to manage financial crises; (and)

Its proposed reforms include:

-- more greatly empowering the Fed over "all firms that could pose a threat to financial stability, even those that do not own banks" like insurance companies;

-- originators of securitized loans to retain some of the credit risk;

-- broker and loan originator compensation changes away from income up front to spreading it over time and making it performance dependent;

-- establishing "wind down authority to take over large financial firms like AIG, Fannie and Freddie;" and

America has a legacy of failed public agencies as well as regulatory and legislative reform for familiar reasons - no teeth or real oversight, mostly because financial and other industries end up self-regulating, consolidating, and growing at the expense of the public interest - smaller firms then crowded out, bought up, or eliminated. Giving the Fed more power lets banking giants make their own rules, decide how and whether to enforce them, and operate the way they wish because no one in government dares challenge them.

It's no surprise why Obama's 2009 plan, House enacted legislation, and what the Senate will now debate capitulate to Wall Street. Their lawyer/lobbyists wrote the bills to give them more, not less, power, masquerading as reform.

If enacted, banks will get congressional cover to self-regulate, continue past fraudulent practices, inflate new bubbles, transfer more public wealth to themselves, crush competition, wreck the economy further, and be bailed out again to buy more assets at cheap prices, then start the whole process over again.

"in a testament to (Wall Street's) power, what's on the table is what works for bankers and the Street. (Congressional legislation) is nothing more than Wall Street's secret agenda to eliminate competition, grow bigger profit engines and rely on the perception of a socialized system to support cheap funding....the truth is not being told. Big banks are leaning on legislators to facilitate and perpetuate the concentration of banking interests (to let them) eliminate competition and fatten margins."

House legislation especially props up failed banks, more than ever empowers them, and insures the full faith and credit of Washington to bail them out whenever needed.

The so-called credit rating agencies are part of the scheme. Ones like Moody's, Standard & Poor's, Fitch and others bogusly assessing toxic securitizations and other financial alchemy in return for large fees and big profits. The House bill does nothing to correct this, the final Senate one not likely to either. Instead, they'll give enforcement power to the notoriously corrupt SEC, staffed with officials that move to high-paying industry jobs, so refrain from future slapping hands that may feed them.

Other House (and likely Senate) bill problems include:

-- failure to address "too-big-to-fail" (TBTF) institutions that are too big to exist;

-- not reforming government-sponsored enterprises (GSE) like Fannie, Freddie, and others; and

-- letting bankers self-regulate by keeping the Fed in charge - the ultimate conflict of interest assuring no change in business as usual, just cover to paper over flawed policy.

If the final Senate bill resembles HR 4173 as appears likely, Wall Street shenanigans will be green-lighted. A future greater financial crisis is assured. Giant banks will get bigger. Trillions more in public wealth will be looted. Current financial reform debate will be revisited, but nothing will be resolved now or then unless grassroots outrage forces it.

Dean Baker, Co-Director of the Center for Economic and Policy Research, said the House bill:

"does little to change the current structure of the financial system. The 'too-big-to-fail' banks will be left in place, even bigger and less accountable than before. There will be nothing done to separate commercial and investment banking," so giants like Goldman Sachs, JP Morgan Chase, Citigroup, and Bank of America will be able to game the system for even greater profits.

"The bottom line is that this bill is almost certain to leave the taxpayers holding the bag for future bailouts."

On March 25, writing for the National Legal and Policy Center (NLPC - nlpc.org), Carl Horowitz called the Senate bill "the equivalent of a revolving bailout for failing Wall Street and banking institutions."

Its provisions still a work in progress, ones in it, unless amended, include:

-- greater than ever Fed empowerment;

-- requiring over-the-counter derivatives be traded on exchanges or clearinghouses but doing nothing to curtail speculative abuses;

-- having smaller banks overseen by the Office of the Comptroller of the Currency (OCC) or FDIC;

-- letting shareholders vote on executive pay and nominate directors, but with too few shares to matter;

-- acknowledging Volker rule merits by only requiring its implementation at some unspecified future time; and

Both House and Senate bills empower existing authorities, lets them run newly established ones, so reform amounts to old wine in new bottles, leaving bankers in charge and the public as vulnerable as before to a certain future crisis they'll have to pay for again. Shah Gilani's December 30 moneymorning.com article explained it up nicely, saying: