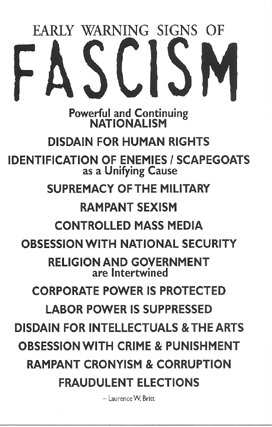 "At it's core pre-emptive policing severely undercuts the basic notion that police are public servants sworn to protect and serve, rather than intelligence agents whose job is to feed daily observations into data streams winding their way into a nationwide matrix of Fusion Centers and federal agencies. The SAR Inititave casts a wide net of surveillance: it encourages local police, the public, and corporations and businesses to engage in vaguely-defined "pre-operational surveillance" and report actvities such as the practive of religion and spirituality, political protest, and community organizing will weaken civil liberties and erode community trust."

BOSTON - An 82 page analysis of domestic intelligence policy released by Political Research Associates (PRA) Tuesday found local police are being used as domestic intelligence gatherers with little to no oversight in criminal intelligence distinctions. Amid the findings are rampant racial and political profiling and hystrionic calls for further surveillance protections where no criminal or terrorist acts occurred. Costs to implement digital surveillance based on these local police intelligence gatherings were deemed expensive and wasteful. The practices were overwhelmingly considered unconstitutional, against 4th Amendment protections.

The study, Platform for Prejudice, evaluated the police intelligence gathering practices in 12 cities for 2 years involving a decentralized network of 72 Fusion Centers. Tax funded Fusion Centers are present in local communities for the purposes of gathering criminal intelligence and terrorism prevention. Local police are deployed to gather federal intelligence to submit to an Information Sharing Environment (ISE) or a Fusion Center. It is then fed to a network to federal intelligence agencies, like the FBI. It may be furthered for international analysis at the National Counter Terrorism Center. Examples of suspected criminal activity worthy of creating a pre-criminal national intelligence profile included: photography, taking notes, sketching, public speaking on political issues and making diagrams in public settings. Once a profile is created local police may be dispatched to follow up on non-criminal activities for the purposes of surveillance. Non-criminal information submitted to an ISE is deemed "fact-based information" by local police hence alluding to potential criminality of any activity submitted.

Further into the report, traditional neighborhood crimes and traffic violations are filtered with a label of terrorism prevention in an "all crimes" watch policy. People become profiled for minor infractions, such as speeding tickets. Their information is then funnelled into a database treatment cycle for national terrorists.

The UK derived practice of pre-emptive policing creates a deluge of low quality information into our national terror watch networks. According to RAND Corp. local police are "simply collecting so much data of such low quality that they do not provide much [counter-terror] benefit". Non-criminal information bogs down networks with a low threshhold for reporting information. It becomes difficult to evaluate bonafide national terror threats according the the National Counter Terrorism Center.

According to officials who designed the SAR Initiative, pre-emptive policing is based on behaviors regardless of race, ethnicity, or political associations. Behaviors otherwise overlooked by police enforcement become what is called a "reasonable indication" of suspicious activity. The definition of "reasonable suspicion" became independent of actual crime and criminal predicates in the adoption of this initiative's use of "reasonable indication".

Privacy safeguards and legal limitations were overlooked in code 28 CFR 23, in accord with The Justice Systems Improvement Act of 1979. This code necessitates an actual crime as a predicate for reasonable suspicion and the creation of an intelligence record. This code is being challenged to downgrade current predicates for criminal intelligence, to simply "reasonable indication" of possible crime. Using "reasonable indication" officers can gather any data, at any time for intelligence purposes without probable cause.

The window stays open for this practice as long as ISE's Program Manager does not perpetuate any oversight of information submitted by State and Local agencies. Due to short cuts, negligence in sifting non-terror related reports and little feedback to local police departments submitting SARs, "reasonable indication" becomes standard operating procedure for public surveillance.

According to the ACLU, law enforcement are encouraged by federal agencies to actively disregard 28 CFR 23 and expand the quest for non-criminal information to include public and private sector data. The focus and objective for certain law enforcement agents may be to gather data considered unclassified. For example: biometric data eyes, fingerprints, face scans, and body identifiers are considered largely unclassified.

The report indicates that up to 23,000 private representatives work with InfraGuard providing information about potentially anyone. The potential for intelligence abuse is astronomical, as InfraGuard users claim they can dispatch FBI operatives in a vindictive manner on political and economic enemies.

iWatch, previously reported on Waking Up Orwell as "iSnitch", is a model of a neighborhood watch program used to produce SARS in Los Angeles. [You can see how well that went.]

You may want to look into StopSpying.us for resources and information about how to get organized and involved in, literally, watching and reporting against those who unconstitutionally watch and report on you. One strategic way is to enlist FOIA or open records requests to your local criminal justice departments to find out what kind of information is being gathered on your neighborhoods and submitted to Fusion Centers. Through a casual online web search you can ususally find out if a Fusion Center is near you.

The information being arbitrarily collected can be held for up to 10 years.

Doing my part in the local area: http://www.youtube.com/watch?v=Gm6OkETd7iw
Make a Comment (1) • Email Link • Send Letter to Editor • View for Print