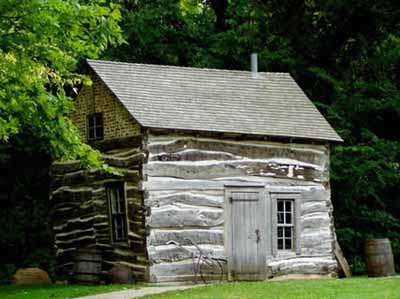 Edited Excerpts from: "Do you own your Land?"

The foundation of this nation was real property ownership.  That's why the settlers came here.  To insure private ownership of land, the nation's founding fathers made it unlawful for government to own land except for the ten square miles of Washington D.C., and such as may be needed for erection of Forts, Magazines, Arsenals, dockyards, and other needful buildings. (The Constitution)

When an American fulfills the requirements to obtain a "Land Patent" the patent is assigned by and under the hand and seal of the President of the United States, in accord with an Act of Congress.

In America today people think they own their land, but unless they have the Land Patent on the land they do not own it.  Most people today obtain "Real Estate" by contract and then on fulfillment of the contract they transfer control of land by "Warranty Deed".

The Warranty Deed cannot stand against the Land Patent.  "A grant of land (Land Patent) is a public law standing on the statue books of the State, and is notice to every subsequent purchaser under any conflicting sale made afterward." Wineman v. Gastrell, 53 FED 697 , 2 U.S. App. 581

The Land Patent is permanent and cannot be changed by the government after its issuance.  "Where the United States has parted with title by a patent legally issued and upon surveys made by itself and approved by the proper department, the title so granted cannot be impaired by any subsequent survey made by the government for its own purposes." Cage v. Danks, 13 La.Ann 128

In the history of this county no Land Patent has ever lost an appellate review in the courts.  As a matter of fact in Summa Corp. v California, 466 US 198 the Supreme Court ruled forever that the Land Patent would always win over any other form of title.  In that case the land in question was tidewater land and California's claim was based on California's constitutional right to all tidewater lands.  The patent stood supreme even against California's Constitution.

Land cannot be taken for debt or taxes, but Real Estate can be.

What is Land?  By definition: "'Land' is not restricted to the earth's surface, but extends below and above the surface. Nor is it confined to solids, but may encompass within its bounds such things as gases and liquids. A definition of 'land' along the lines of 'a mass of physical matter occupying a space' also is not sufficient, for an owner of land may remove part or all of that physical matter, as by digging it up and carrying away the soil, but would nevertheless retain as part of his 'land' the space that remains. Ultimately … 'land' is simply an area of three dimensional space, its position being defined by natural or imaginary points located by reference to the earth's surface. 'Land' is not the fixed contents of that space, although, as we shall see, the owner of that space may well own those fixed contents. Land is immovable, as distinct from chattels, which are moveable; it is also, in its legal significance, indestructible. The contents of the space may be physically severed, destroyed or consumed, but the space itself, and so the 'land', remains immutable."  Peter Butt, Land Law 9 (2nd ed. 1988) Reprinted in Black's Law Dictionary, Seventh Edition

What is Real Estate?  It's a document that lays over the land in color of title; though it is not the Land itself, it may include with it the right to real property that sits upon the Land.  Banks and corporations like Real Estate because they can own it without an Act of Congress.  They and others can use the fiction of title to it to seize property under the color of law.

They've taken their colors of title into the courts for so long that the people (under three generations of deception and ignorance) simply allow them to go ahead.  Generally, people seem to have forgotten about land patents.

For that cause when you go into a court today with a real land title case (a Land Patent case) chances are the judge and any attorneys involved won't know what a Land Patent is.

The first court you run into that understands the power of a Land Patent may be a U.S. Circuit court of Appeals, and in the history of this nation there has never been an appellate case where a properly set Land Patent has ever lost its title to the Land.

If you ever have the occasion to have to defend your right to your land in court.  And someone else presents a proof of right to the land patent on your land, you'll loose your land.

So contact us and get your land patent secured. It's important.

Now, let's suppose you have your Land Patent properly secured and for some reason you have to defend your right to the land.  What do you do?

If you understand the patent and how it works you'll defend it successfully.

So again, here's how it works:

The Land came to the nation by treaty or war prize.  The government only had limited ability to own land, as before mentioned, and all of the remainder of the land was held in the sole disposition of the United States until it was granted under act of Congress by the hand and seal of the President to some person.  Then in that same act the President makes the Grant Patent.  Which means that the Land came to the nation by treaty and the patent assigns a specific part of that treaty to you and your heirs and assigns forever.

So your land comes to you from the treaty through your Land Patent.  This is critical, the Land Patent secures the treaty to you.  The court is bound by the supremacy clause of the Constitution to uphold the treaty making your Patent a statutory limitation throughout the land.  Wineman v. Gastrell, 53 FED 697 , 2 U.S. App. 581.

If you ever have to defend your right to the Patent here's how.  Get a full abstract on your land.  The Abstract will show the assignment on the land and patent from the patent to you.  Each record of the Abstract is a matter of public record, well established over time.  If your right to the land was well secured (with a properly secured Warranty Deed) and you have properly accepted and secured the Land Patent to that Land (Team Law's documentation has worked over 60 years), you'll win, if you're prepared.
...

For more on Land patents check out:

Land Patents - Understanding how they work

To listen to Senator Madsen on Land Patents order the Audio Tape: "Do you own your Land?"

To search for land patents: http://www.glorecords.blm.gov/PatentSearch/

2 Comments in Response to Do you own your Land?

Virginia (America) was claimed by the corporate entity, the Holy Roman Empire whose CEO is the Pontiff of Rome (Vatican). Thus came about in Papal Bulls (Papal Executive orders) of 1455 and 1493

Thus, US Presidential 'land patents', even in the Republic before the existence of the corporate UNITED STATES, were just issuing 'possession privileges' to the 'privileged plantation slaves' owned by the pontiff of Rome, as claimed in the Papal Bull, Unam anctam of 1302: "Furthermore, we declare, we proclaim, we define that it is absolutely necessary for salvation that every human creature be subject to the Roman Pontiff." Subject to = slave of.

And, this declaration is made when a new Pope is crowned: "Receive the tiara adorned with three crowns and know that thou art Father of princes and kings, Ruler of the world, Vicar of our Savior Jesus Christ." And, the Pope endowed with being the vicarious presence of "The EARTHLY GREASED PIG" - look up the Latin etymology of 'Jesus Christ'.

What this shows you is that the Red Robed Priests of Isis that occupies the Vatican (hill of sacrifice) is purely an Earthly Despotism, and always has been, even back in that Chaldean/Sumerian priest/king organization since antiquity in Egypt.

The privileges of having land under a type of privileged possession (land patent) ceased with the re-entry into international bankruptcy of the American Union after 1929, when a system was devised to impose the status of 'criminal' on all American plantation slaves of the Pontiff of Rome. That was done through an Adult American using the State owned legal name without permission, resulting in a maritime charge of 'guilty of theft of use' where one is guilty unless proven innocent.

No, you do not.  The Govt. owns that land and merely allows you to rent it, with the privilage of transfering it if you desire.  Don't believe me?  Try not paying your property taxes and see what they do with YOUR land.