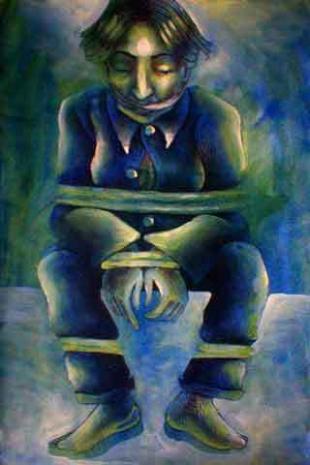 On October 21, 2008, for the first time in school history, the University of Ottawa (U of O) Faculty of Science, without cause, deregistered undergraduate Marc Kelly, an exemplary student, expelling him for the semester and preventing him from completing the final three courses he needed to graduate. The official email sent him read:

"The Faculty of Science has been asked to deregister you. (This) message is to notify you that you are no longer registered...."

The official reason was the Department of Physics' displeasure over the nature and methods of his valid, legitimate research, twice secretly rejecting it, then informing him through pro forma letters saying, "It is common sense that (your research) has to use physics tools and physics knowledge."

Kelly was never contacted or questioned. When he tried approaching Physics Chair Bela Joos for an explanation, he refused to see him, suggesting this action wasn't over academic performance, but for publicly supporting tenured Professor Denis Rancourt, unfairly fired as explained below and in detail in an early April article titled, "Targeting Academic and Speech Freedoms: The Case of Canadian Professor Denis Rancourt."

In March 2009, it was for his political activism - specifically, courageously supporting oppressed Palestinians, criticizing the university's refusal to academically boycott Israel, and gallantly backing what U of O officials and President Allan Rock opposed - a former Canadian politician, UN ambassador, and staunch Israeli supporter.

Affected also was Mahdi Darius Nazemroaya, student and former Fulcrum Publishing Society (FPS) Ombudsman (U of O's English-language student newspaper) until his March 2010 Board of Directors dismissal for supporting Rancourt, criticizing offensive FPS reports about him, refusing to stay quiet and go along, and confronting Business Manager Frank Appleyard's violation of FPS rules by simultaneously working for President Allan Rock and the FPS. His case was discussed in an April article titled, "Targeting Activist University of Ottawa Students."

An exemplary U of O physics and math undergraduate, he worked for Rancourt as a research assistant. In December 2008, he was arrested for trying to film proceedings at a school Senate meeting, inspired by the University's Vision 2010, in particular the phrase: "transparency and accountability are the principles that guide our university governance." The Senate is U of O's highest academic matters governing body.

At the time, proceedings were open to the public, and no policy prohibited videotaping them, members of the media having previously done it freely. This time Vice President/Provost Robert Major and then Vice President Governance Nathalie Des Rosiers objected. Kelly explained his rights and suggested the issue be raised at the next Senate meeting.

Instead, Major had the Ottawa police arrest him, treat him like a common criminal, handcuff and forcibly remove him, criminally charge him with disturbing the peace, then tell him he'd be released if he signed a freedom restriction agreement barring him from campus.

Kelly protested, explained he was a U of O student and employee. Administration officials lied, saying he was neither. After his release, he was under constant surveillance, reports then sent to police. When he tried registering for a course at the Faculty of Science undergraduate office, police were informed to stop him.

A year later, criminal charges were dropped but not his U of O banishment. On November 13, 2008, Allan Rock publicly assailed him. In January 2009, he (and Rancourt) were arrested at a campus event where he was making a presentation on student activism. Afterward, the Crown and U of O pressured him to accept a Peace Bond under Section 810 of Canada's Criminal Code - to excuse the university from a court defense and have Kelly agree to stay off campus. At the time, the Crown Prosecutor and U of O collaborated with Ottawa police, acting no differently than in a police state.

On May 14, 2009, late at night, police arrested Kelly again, criminally charged him with "breaching his (campus prohibition) conditions," and jailed him. One charge was for questioning Allan Rock at a public event - his legal right under Section 2(b) of the Canadian Charter of Rights and Freedoms, affirming among other provisions that:

Everyone's "fundamental freedoms" include....freedom of thought, belief, opinion and expression, including freedom of the press and other media of communication (as well as) freedom of peaceful assembly (and) freedom of association."

During summer 2009, after negotiations with Des Rosiers, an agreement was reached as follows:

-- Kelly would fast track his degree, avoid taking three additional mandatory electives, and finish his course requirements at Carleton University, except for one course at U of O (MAT 2762);

-- would ask the Crown Prosecutor to drop all charges.

Ahead of the fall semester, U of O Legal Council Alain Roussy emailed Kelly the agreement, introducing several previously unmentioned provisions. They not only prohibited his taking civil action, but also, under Ontario's Trespass to Property Act (a provincial law dealing with illegal entry into private and public property), indefinitely prohibited him from applying to any U of O undergraduate or graduate program for the next five years. Yet the university failed to deny his right to apply for graduate work, and student protests continue in his behalf.

In February 2010, he was arrested again at the Student Federation U of O (SFUO) Senate Appeals Committee (SAC), where he was discussing his abusive treatment. Dean of Science, Andre Lalonde, spotted him, and alerted police to arrest him.

U of O lawyer Roussy countered, saying the university "owns all the property." Kelly was then arrested for trespassing. So was union President Seamus Wolfe "for disturbing the peace by swearing," despite Canada's Charter of Rights and Freedoms affirming everyone's free expression right, cussing included.

Kelly's struggle for exoneration and reinstatement continues against outrageous U of O injustice - determined to deny him, disgracing the university, its complicit officials, and their debasement of fundamental democratic freedoms.

Lost also is U of O tradition, stated in its "Mission, Vision and Values" as follows:

"Since 1848, the University of Ottawa has been Canada's university: a reflection, an observatory and a catalyst of the Canadian experience in all its complexity and diversity. Our university is characterized by its unique history, its commitment to bilingualism, its location both in the heart of the national capital and at the juncture of French and English Canada, its special commitment to the promotion of French culture in Ontario and to multiculturalism. As a result and through the groundbreaking work of our community members, we are uniquely positioned among Canada's research-intensive institutions to give students a remarkable education, to enrich the intellectual and cultural life of Canada and to help the country achieve greater international prominence."

U of O claims to be "what Canada represents;" that it:

-- "places its students at the core of its educational mission....;

-- builds strong partnerships to fulfill its social responsibilities; and

-- encourage(s) freedom of expression in an atmosphere of open dialogue, enabling critical thought, supported by intellectual integrity and ethical judgment."

U of O corrupts this code under an abusive administration, assailing academic and speech freedoms in support of privilege and power, ruthlessly enforcing them at the expense of its students and faculty. It's intolerant of progressive activism, and dedicated to replacing truth, open expression and fundamental justice with authoritarian control - what Rancourt calls "emergent fascism (through) an optimized balance of force and a designed mental and social environment (under which) Independent thought is eliminated (and its) influence rendered foreign," Canadian universities no longer safe havens. US ones never were with very rare exceptions.

America already is in advanced decay, Canada close behind toward a dark future, prevented only by "authentic (determined grassroots) rebellion."

SAC has eight members - six full-time professors, one undergraduate, and one graduate student. It has final say over student appeals with regard to "regulations governing admissions, promotions and degree requirements, and any other (U of O) academic regulations (as well as recommended) disciplinary sanction, or appeal(s) referred to the Committee by the Senate or its Executive Committee."

Vice-President/Provost Robert Major defamed Kelly, calling him mentally unstable to block his nomination. Addressing students at the time, President Rock implied they have no say over Senate Appeals Committee nominations of professors and executives. Under his authority, U of O is despotic, ruthless, and dismissive of fundamental academic principles, ethics, freedoms, and responsibilities.

On November 10, 2008, activist students defeated an Administration attempt to institute a Student Code of Conduct, arguing that an Executive Code was needed instead to curb abuses of power, especially by Allan Rock, calling his behavior toward Kelly "inexcusable (by its) disproportionate use of force."

On October 21, 2009, SAC members accused Administration officials of persecuting Kelly for "having spoken out and for having ultimately taken his grievances to President Rock." In 2008, he filed multiple U of O appeals and publicly denounced injustices committed against him.

On November 11, 2009, Rancourt, in a letter to Des Rosiers and the Canadian Civil Liberties Association, called for her CCLA resignation for her role in:

-- banning him, a tenured professor, from campus;

-- persecuting a student for his activism and public statements;

-- implementing a required "snitch-line for all university staff;"

-- refusing to investigate and stop illegal covert surveillance of a professor's legitimate political and academic activities;

-- targeting a student the same way;

-- acting unethically and irresponsibly; and

On November 29, 2009, the Crown Prosecutor dropped criminal charges against Kelly, and was prepared to drop others in exchange for his accepting a Peace Bond as explained above. Kelly declined, wanting the court to stay the charges. On June 2, a judge will hear them.

On January 20, 2010, U of O imposed a "final solution" on Kelly, demanding he accept its terms, despite no cause and without explanation. SAC vigorously opposed it. Academic and speech freedoms hang in the balance. So do democratic rights in a free society, no longer assured in Canada or at an abusive university, at the expense of its student body and academic staff, tenure no assurance of protection nor Canadian law.

Weekly Update --- Listen to the Doctors, End the Lockdowns by Ron Paul

This Is Not a Revolution. It's a Blueprint for Locking Down the Nation