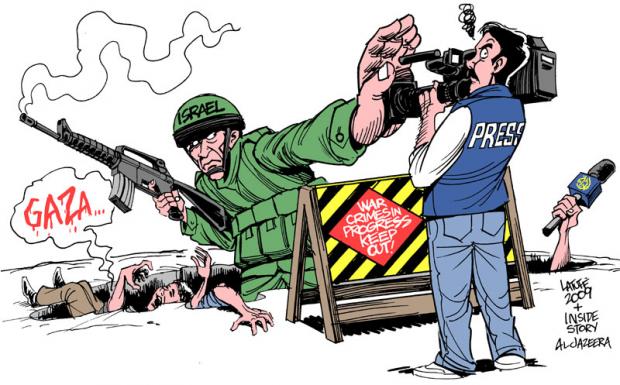 Occupied Palestinians and Israeli Arabs never had rights in a state affording them solely to Jews. Now even they're at risk as democratic freedoms fast erode on their way to extinction; to wit, free expression, a right without which all others are endangered. It includes free speech, a free press, freedom of thought, culture, intellectual inquiry, and the right to challenge government authority peacefully, especially in times of war and cases of injustice, lawlessness, incompetence, and abuses of power.

Israel has no constitution or specific laws guaranteeing equality or free expression. Yet its Basic Laws protect human dignity and liberty as fundamental democratic values, more rhetoric than fact given its persecution of journalist Anat Kam and Haaretz's national security reporter Uri Blau.

Kam (held under house arrest since December) will be tried in mid-April for passing confidential documents she removed while stationed in IDF General Yair Naveh's office during her mandatory military service. Blau, fearing assassination or a judicial lynching, is now hiding in London.

They're on grounds of harming national security, damaging the investigative process, and the ability of prosecutors to prove criminal liability. Part of it is cited in an undated April richardsilverstein.com Tikun Olam article headlined, "Anat Kam Gag Order Published for the First Time," stating:

"....publication about the investigation or that it even exists (is prohibited), and on the judicial discussion of the matter and legal decision rendered by the court which has been and will be conducted....

We seek that the gag prohibits publication even about the application for a gag order, its content, and even the existence of a gag order in this case; and any other publication likely to identify the respondent, witnesses, suspects or others engaged in the investigation, including publications of their images, addresses, or other identifying details."

"Among the materials Kam allegedly transferred to (Uri Blau) were (more than 2,000) files showing that high-ranking Israel Defense Forces officers had approved targeted assassinations of wanted Palestinians who could have instead been detained," violating a Supreme Court order.

According to B'Tselem, IDF assassins killed 232 Palestinians from October 2000 - October 2008, and another 154 non-targeted civilians coincidentally. The common code names used are Pa'amon (preventive action) and Sakum (targeted assassination). When carried out, official reports say these were "arrest operations (or) exchanges of fire," force having been authorized to intercept and kill.

Involved was IDF Central Command head, General Yair Naveh, in whose bureau Kam worked as a clerk, then later as assistant bureau head. Authorizing the assassinations, he said the target "leads a 'ticking' infrastructure and meets the required criteria for a preventive strike." Another meeting in his office with General Sami Turjeman, head of the Operations Directorate, ordered "no more than five people" to be killed, the other three, of course, innocent civilians.

The next day, Chief of Staff Gabi Ashkenazi approved it, ordering only that it be done on a different date in light of planned diplomatic meetings at the time.

On December 14, 2006, High Court President, Justice Aharon Barak, ruled that well-founded information is necessary to say civilians intend hostile acts, and no one should be assassinated or harmed in lieu of nonviolent workable alternatives. "In other words, a person should not be assassinated if it is possible to arrest him, interrogate and indict him."

According to international law Professor David Kretchmer, "It turns out that in total contradiction to the High Court ruling, there are cases in which there is an order to assassinate someone when it is possible to arrest him. Advance approval to kill civilians who do not take part in hostile activities (or against whom no evidence proves guilt) makes things even worse....
Postponing an operation for diplomatic reasons is unequivocal proof (that) this is not a 'ticking bomb' situation."

General Naveh (Central Command head from 2005 - 2007) admitted that at times "no genuine attempts are made to arrest wanted men." Saying they never happened on his watch, he claimed Malaisha and Abed were legitimate targets as "ticking bombs," despite no evidence to prove it and in defiance of a High Court ruling.

The only State justification ever given is that targeted killings are "an exceptional step (taken) only when there is no other, less severe way of" acting.

From seclusion in London, Haaretz published Blau's April 10, 2010 article headlined, "This isn't just a war for my freedom but for Israel's image," saying: he never imagined his foreign trip would prevent him from "return(ing) to Tel Aviv as a journalist and a free man, only because I published reports that were not convenient to the establishment."

So when told if he returned, he "could be silenced forever (and/or) be charged for crimes related to espionage, (he) decided to fight," repeating the above title he chose for this article.

As a journalist, he expressed commitment to provide "as much information as possible and in the best way, with maximum objectivity. (For Haaretz, his) name has appeared, alone and with others (revealing) exposes dealing with (high) public figures and institutions of all kinds." None could have been published without sources and corroborating documents.

All previous military related exposes "were vetted by (their) censors before publication." They weren't "pleasant to read," but no matter. A journalist's job is to provide facts on relevant "goings-on around them....but no Israeli journalist has known until now that such exposes could have him declared an enemy of the state and find himself in jail" or perhaps killed.

1. "Serious Espionage (divulging secret information with the intent to harm the security of the state) - an offence against clause 13b of the Penal Law 1977 (hence: the law).

2. Serious Espionage (gathering secret information with the intention to harm the security of the state) - an offence against clause 113c of the law."

The charges explain her exposure "to many documents and presentations in various degrees of classification, authored in the various departments of the General Staff, the Chief of Staff's office, and the various divisions of the command" with respect to military operations, discussion summaries, IDF targets, and related information.

"During her military service the accused stored in a special folder the documents and presentations and, near her discharge from the IDF, on or about May 2007, the accused, through another, copied the contents of the file onto two discs, one for documents and the other for presentations."

"The accused did so out of ideological motivations and with the intent to damage the security of the state, among other means, through publishing the documents to the general public."

She took the classified materials home without authorization to do so. "In or around June 2007, (she) copied the document disc onto the mobile IBM computer at her home....contain(ing) over two thousand documents, 700 of which were classified as "secret (or) top secret."

"On or around September 2008, the accused, acting without legal authority and with the intention to harm the security of the state, delivered a large amount of documents to journalist Uri Blau," including "top secret (and) secret" ones. He then began publishing them in November 2008 and in subsequent articles.

1. Does Haaretz's protection for Uri Blau and his sources harm state security?

"Of course not." All were "submitted to the military censor and approved....before publication, as required by law." State security depends not only on abiding by censor regulations, but also on upholding democratic principles and values, "including a free press. The agreement signed between Blau and the Shin Bet security service proves that (it) understands this as well."

2. Does Blau still have classified documents? If so, why hasn't he returned them to Shin Bet?

"Blau left on vacation with no classified documents in his possession." But he maintains previously used materials for all his articles. "Haaretz, therefore, believes that it cannot pass on all (his) documents (to the IDF and Shin Bet) because its senior officials may use them to trace his sources."

Blau believes he acted according to his agreement with Shin Bet and broke no law. "He passed on dozens of classified documents....and the defense establishment had no complaint about" ones he chose.

Blau gave Shin Bet dozens of printouts and his personal computer, "which was destroyed in his presence." Shortly after doing it, Kam was arrested on suspicion for having been the source.

3. "Why isn't Blau returning to Israel to explain all this?"

He took a three-month vacation to the Far East with his fiancee. While away, Kam was arrested. Shin Bet told Haaretz it reneged on its agreement, thus no longer assuring the immunity of his sources, especially Kam.

If he returns now, she may be further harmed as he'll be questioned on arrival, given a lie detector test, have his entire document archive examined, and called as a witness against her, besides endangering his personal safety.

4. In Haaretz's judgment, can state security be safeguarded without revealing confidential sources?

Indeed so. "The combination has worked and will keep working, and it's important to ensure" no change of policy so future sources will volunteer information they'd otherwise be reluctant to do.

"I believe he will bring back the documents, he will not be harmed and the affair with Anat will also come to an end, I hope, quickly."

Blau's attorneys, Mibi Moser and Tal Leiblich, called it "a positive development." Meanwhile, a number of journalists signed a petition requesting no prosecution of Blau, saying authorities haven't previously done so for holding secret information, which most reporter/writers at times get. Thus far, the IDF Spokesman said only (on April 11) that claims Blau reported "are upsetting and distorted."

According to newly released court materials, Kam explained that:

"Classified documents reveal that the Israel Defense Forces had committed war crimes in the West Bank....and that her motivation for removing them was to expose 'certain aspects of the IDF's conduct in the West Bank that I thought were of interest to the public.' "

She added that "if and when the war crime the IDF was and is committing in the West Bank would be investigated, then I would have evidence to present." She believed nothing she did endangered Israel's security because she focused only on "the principles and the policies that were behind the top officers' decision," not specific military details.

By exposing these crimes, she thought she "would make a change...."

Kam now faces trial and a possible life sentence. Blau fears he's in danger no matter where in the world he hides. Nazareth-based journalist/author Jonathan Cook raised the specter of Israel's "dark underbelly," its tarnished image, and "battle for what is left of its soul," given its eroding democratic freedoms and fast track toward fascism in a nation where no one is safe, even Jews.