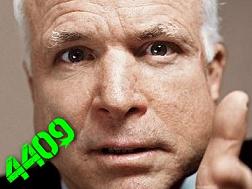 Good job and thank you Michael Fink for the video!
Silence is acquiescence of agreement. McCain deliberately refused to answer the simple question of “does this include American citizens”…not once but twice.  Him not answering answered the question.

In Hamdi v. Rumsfeld, 542 U.S. 507 (2004), the Supreme Court reaffirmed the right of United States citizens to seek writs of habeas corpus even when declared enemy combatants. Now I see why they changed the term to enemy belligerents.

Overall, this bill seeks to create a new category of prisoner / detainee called the “Unprivileged Enemy Belligerent” and this bill specifically states that it can include American citizens.  The bill’s main points revolve around the creation of an inter-agency Executive Branch “Interrogation Team” whose criteria for selection is up to the President.  Furthermore, the “interrogation team” can be anyone who has an intelligence, law enforcement or military background and is based upon what type of information they want to learn from the detainee.

This means the NSA, CIA, FBI, Military, DEA or even city and state police officers may be a part of the team.  This also allows for private contractors to be included on the interrogation team as the bill does not stipulate that the interrogators must be sworn officers or soldiers.

This is a scary situation.  The President can call upon interrogators who have never taken or sworn an oath to uphold the Constitution to interrogate American citizens.

FOR MORE INFO ABOUT THE BILL CLICK THE LINK BELOW

The bill does NOT mention the word “combatant” as McCain stated. This is very telling because I think by law an American citizen cannot be a combatant so they are going to use the term belligerent in place of combatant.

combatant is someone who takes a direct part in the hostilities of an armed conflict. If a combatant follows the law of war, then they are considered a privileged combatant, and upon capture they qualify as a prisoner of war under the Third Geneva Convention (GCIII). An unprivileged combatant is someone, such as a mercenary, who take a direct part in the hostilities but who upon capture does not qualify for prisoner of war status.

"The privilege against self-incrimination is neither accorded to the passive resistant, nor the person who is ignorant of his rights, nor to one indifferent thereto. It is a fighting clause. Its benefits can be retained only by sustained combat. It can not be retained by attorney or solicitor. It is valid only when insisted upon by a belligerent claimant in person."Once he testifies to part, he has waived his right and must on cross examination or otherwise, testify as to the whole transaction. He must refuse to answer or produce, and test the matter in contempt proceedings, or by habeas corpus." United States v. Johnson, 76 F. Supp. 538, 540 (District Court, M.D. PA. 1947)