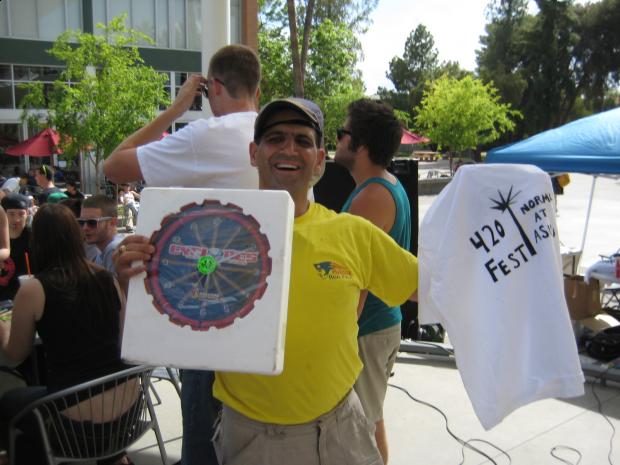 morpheus wins best joint roller 420 norml fest asu Ron Paul marijuana
People across the country defied the law April 20 to fire up. While many smoked marijuana, it was a different celebration on the campus of Arizona State University.  At the 420 celebration at ASU were many students and activists were gathered for fun, joint and blunt rolling contests, speeches and Music. 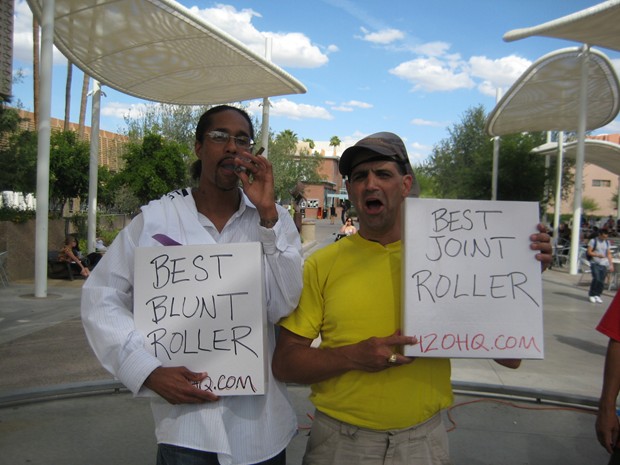 Our one and only Morpheus takes the title of best joint roller by rolling 14 joints in 4 minutes and 20 seconds and wins a trophy!
April 20: a half-baked holiday By Zach Fowle State Press April 19, 2010 at 7:24 pm Hey, man. Have you ever looked at your hands? I mean, really looked at them? They?re amazing! They?re so?touchy. Whoa.
Sorry, got a little distracted there, man. But today is April 20, the unofficial holiday for jokers, smokers and midnight tokers alike, so you?ll forgive me if I?m a little ? dazed. I was just reflecting on how this day became the cannabis carnival that it?s grown into.
There are a lot of conflicting stories out there, man. Some say 420 found popularity because California police officers used the numbers on the radio to designate a marijuana violation in progress. Others believe Adolf Hitler?s April 20 birthday brought the numbers into use.
Nahhh, man. Larry Sloman?s ?Reefer Madness: A History of Marijuana? lays out the truth: a group of high school students in San Rafael, Calif. in 1971 used the code ?420 Louis? to tell each other to meet by the statue of Louis Pasteur outside the school at 4:20 p.m. for a smoke session. As time passed, the kids ? who called themselves ?Waldos? ? found that ?420? could be used as code to clandestinely discuss weed around teachers, policemen and other figures of authority.
According to Sloman, the crew started getting high with the Grateful Dead at their rehearsal studio in San Rafael, and the numbers spread. April 20 soon evolved from code to celebration and method of protest. Today, the ASU Students for Liberty will host a full-day event on the Tempe campus using 420 to spread the message of their displeasure at current marijuana laws. It's an educational festival to show how much better it would be if we treated marijuana and drug use as a public health problem, rather than a criminal problem, said American history senior Ross Kenyon, a member of Students for Liberty who'll be speaking at the event.
The day's festivities will include performances from local bands and comedians, speakers including an economics professor and a gubernatorial candidate and a symbolic smoke-out (with legal herbs) at 4:20 p.m. We'd like to raise awareness of the fact that drug prohibition is destructive, unproductive, and potentially immoral, Kenyon said.
ASU Students for Liberty is a group centered around self ownership: the idea that every individual completely owns his or her life, time, body and the fruits of labor. As long as people own these things and are peaceful, Kenyon said, there can never exist any legitimate authority to prohibit activity that falls within accordance of that principle. Deep stuff, man. Informative, too.
Whether April 20 is a day to smoke, a day to protest, or simply another Tuesday, you can now at least consider yourselves knowledgeable. All thanks to my amazing hands, man. Aren?t they awesome Ooh, Planet Earth is on! Zach can be reached someplace in outer space right about now. Or at zfowle@asu.edu. Whichever, man.
Lighting up for legalization

?JOINT? EFFORT: A haze of smoke rises above hundreds gathered to celebrate 4/20 by smoking imitation marijuana in front of the Memorial Union on the Tempe campus Tuesday afternoon. (Photo by Serwaa Adu-Tutu)

Alan and Steven Proctor are looking to get rid of the stereotype of ?stoners.?

The twins, both freshmen at ASU, started the University chapter of the National Organization for Reform of Marijuana Laws last semester, hosting the club?s first event on Tuesday ? ?4/20? or marijuana smokers? annual holiday.

The group rallied in front of the Memorial Union on the Tempe campus.

?We are going for the ultimate goal,? NORML president Alan Proctor said. ?Full-on legalization and regulation of marijuana. We?re signing people up for membership, trying to raise awareness [and] spread as much education as possible.?

Alan Proctor, a civil engineering undergraduate, said the most common misconception about people who smoke marijuana is the effect it has on them.

?When someone thinks about a stoner, they typically think about someone that is lazy and unmotivated, or someone dropping out of school or just not doing their homework because they smoke marijuana,? he said. ?That is all about the individual. Those connotations and labels put on people who smoke, those are not true.?

Vice president Steven Proctor, a biology major, said the club?s first event had a positive response from the public, including many students who stopped by and talked with NORML members.

A lot of places do real smoke-outs to show the disagreements with the law but we are ? a little less bold than that.?

Both brothers said the stigma placed on those who smoke marijuana often hinders their ability to speak up about their rights.

?That is one thing people have to overcome,? Steven Proctor said. ?We have to get over the initial paranoia of being open and public about our opinion. People are afraid to come out and say they want to see marijuana prohibition come to an end.?

?What we are advocating for is law reform,? he said.

The history of 4/20 goes back to 1971, and to a group of friends at San Rafael High School in California. At 4:20 p.m., the group would meet every week to smoke marijuana. The group eventually became known as the Waldos.

Steven Bloom, a writer for marijuana magazine High Times, reported on the popularity of ?4:20? in 1991, following a concert by The Grateful Dead where the phrase was widely passed through the subculture of the band.

Alan Proctor said the way the holiday grew to be so big decades ago is the same reason it is so big today.

Civil engineer Mark Sigelnski, 45, said he is always on the Internet looking for local 4/20 festivals, and he saw NORML was putting on an all-day event.

Sigelnski said he openly supports marijuana law reform and is a smoker himself for medical reasons.

?Arizona is going to be an uphill battle for law reform,? he said.

Marijuana should be legalized and regulated, Sigelnski said, a process he claims would make it more difficult for children to obtain the drug.

?You ask a high school student what is easier to get ? alcohol or marijuana ? and they will tell you marijuana,? he said.

By establishing a legal process to obtain marijuana, the number of people going to private dealers and risking getting hooked on a more serious drug is reduced, Sigelnski said.

Art junior Shannon Renz said she is against marijuana use and its legalization.

?I actually forgot that [4/20] was today,? she said. ?I?ve heard people say that marijuana is good for you, [but] it?s still a drug, that?s still smoke and no smoke can be good for you.?

Renz said she understands the hype about marijuana and making it legal, but people often follow along without reason.

?It?s cool, it?s funny, it?s exciting, it?s generally accepted but people seem obscenely stupid on the topic and automatically go with the flow and not think about the consequences,? she said. ?They don?t think about the ramifications of what it means. It?s still a drug.?

Reach the reporter at kpatton4@asu.edu

The Streets Of Major U.S. Cities Are Being Flooded With Far More Drugs Than Ever Before