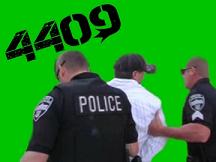 I'm completely against Amnesty but I'm also not in favor of real I.D. and the government forcing people to carry around their papers but that is where we are headed.
Do NOT be fooled by the so their so called SB1070 Fact Sheet. It does not list all the details. You have to read the entire legislation.

This bill is NOT about immigration and you think it is they fooled you good. This is about expanding police powers to that of little dictators in police uniforms.

Soon every state will be doing this under the guise of stopping illegals which it will not stop. All that data will now be used to track you by the federal government. If you get a ticket in maine...they know. If you get stopped and let go in Texas they know. If they run your plates in Georgia they know. This is the beginning of papers please.
Message to Frank Antenori:
Invading and occupying sovereign countries that have virtually no military and then terrorizing the locals in undeclared unconstitutional wars is not something I would be bragging about!
Call and Email them the link to this video to senators below http://www.youtube.com/watch?v=knv6nDZX1mc
Senator Frank Antenori
fantenori@azleg.gov
602-926-5683
Senator Chuck Gray District 19
cgray@azleg.gov
602-926-5288
Senator Russell Pearce
rpearce@azleg.gov
602-926-5760
Terry v. Ohio, 392 U.S. 1 (1968), was a decision by the United States Supreme Court which held that the Fourth Amendment prohibition on unreasonable searches and seizures is not violated when a police officer stops a suspect on the street and searches him without probable cause to arrest, IF the police officer has a REASONABLE SUSPICION that the person has committed, is committing, or is about to commit a CRIME.
==============================

Well if it isn't Mike Williams in the house Lobbyist for Redflex. You could come up with a better name than Ernest T Bass but hey, its good you're reading Freedoms Phoenix  sucka :)

i am glad the legislature gave you folks something else to start a conspiracy theory about..... hopefully on monday and tuesday a couple of photo radar bills will pass and you will all get your panties in a wad!!!

i love it!! tin hats unite...some just wear theirs a little tighter than others....


I think you should make anther Story /Video

That states in Protest of SB 1070 Bill

Deny the the tax base to enforce this law!


Um....SCOTUS determined that a detention is an arrest. You get pulled over by a cop who then let's you go, you have been arrested and released. The "am I free to leave" test will reveal this.

An individual who breaks a law that conscience tells him is unjust, and who willingly accepts the penalty of imprisonment in order to arouse the conscience of the community over its injustice, is in reality expressing the highest respect for the law.
Martin Luther King, Jr.