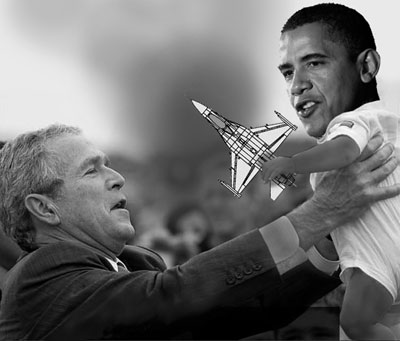 The Pew Research Center (PRC) for the People & the Press is "an independent, non-partisan public opinion research organization that studies attitudes toward politics, the press and public policy issues."

"By almost every conceivable measure Americans are less positive and more critical of government these days." A new PRC survey confirms it, and why not under a "perfect storm of conditions" - a wrecked economy for millions fueling distrust and an "epic discontent with Congress and elected officials" who betrayed them.

People want help, by a reformed, not activist government, and Republicans as well as Democrats draw ire. Growing numbers want less government, except for regulating Wall Street, and "ratings for both major parties, as well as for Congress, have reached record lows while opposition to congressional incumbents, already approaching an all-time high, continues to climb."

For its part, though small, the Tea Party is a potential wild card, its sympathizers inclined to support Republicans, yet Republican-leaning independents say the movement represents their point of view better than the GOP.

Other PRC findings were as follows:

-- 22% reported trusting Washington always or most often, "among the lowest measures in half a century;"

-- 25% had a favorable opinion of Congress in a follow-up early April survey, compared to 25% from the March one; it's Congress' lowest score in a quarter century of PRC studies;

-- under the Obama administration, congressional ratings plunged - from 50 - 25%;

--40% say the administration does an excellent or good job; 17% "say the same about Congress;"

-- federal agencies and institutions score better, but far worse than in 1997-1998; only six of 15 got positive ratings, including the military (80% good or excellent) and the Postal Service (70%);

-- 50% cited inefficient government programs; another 38% said it has wrong priorities;

-- 42% believe their state government has a positive effect, 51% for their local one;

-- respondents mostly feel frustration rather than anger - 56% expressing the former sentiment, 21% the latter, and 19% feeling content;

--30% feel Washington is a major threat to their personal freedom, the most intense anti-government sentiment among Republicans, persons leaning Republican, independents, and Tea Party supporters;

-- no single factor drives public discontent; several include distrust about the state of the nation; the administration in charge (mostly expressed by Republicans and others right of center, less so Democrats); financially stressed independents; and the overall negative view of elected officials fuels government distrust;

-- Democrats are also impacted, many fewer today saying they trust government than under Clinton; 40% of Democrats rate Congress favorably - "the lowest positive rating for Congress ever among members of the majority party;"

-- for the most part, individual congressional members are blamed; they're the problem, not the system say respondents;

-- both parties scored lowest ever in Pew surveys - 38% rating Democrats favorably, 37% for Republicans;

-- specific criticisms included special interest influence; concern for their careers, not the public; unwillingness to compromise; and are profligate and out of touch;

-- 25% said Washington has a positive affect on the country; 24% said the same about Congress; corporations scored as poorly at 25%, the major media at 31%, unions 32%, and the entertainment industry 33%;

-- less than one in five expressing anti-goverment sentiment rates banks and other financial institutions positively;

-- poor performance is the most common government criticism, 74% saying it does a fair or poor job; another criticism is over misguided priorities with regard to doing little to help the public;

-- government size and power is mentioned, 52% calling it a major problem and 58% saying it interferes too much in state and local matters;

-- most respondents want less, not more government with fewer services; 40% say the opposite;

-- anti-government sentiment seems certain to loom large in November to the detriment of incumbents; a large turnout is also expected.

On March 18, Pew released a report titled, "Health Care Reform - Can't Live With It, Or Without It," saying:

-- 54% indicated someone in their household out of work or seeking it in the past year, and only 24% reported higher pay or a better job since early 2009;

-- concern about rising health care costs were expressed, and respondents were more negative than positive about Obamacare;

-- asked to describe Congress in a word, "dysfunctional, corrupt, self-serving, (and) inept" most often were mentioned; 86% of one-word-describers viewed Congress negatively, only 4% positively;

-- public anger and disillusionment affected Obama's approval rating, about as many disapproving as approving, a substantial decline in recent months; notably, he's losing support among his base, Democrats struggling because of lower incomes and lost jobs and homes; most critics, however, are on the political right as expected;

-- deep divisions showed up on Obamacare, 81% of Republicans and 56% of independents opposed while 62% of Democrats are in favor;

-- pro or con, 71% expect rising health care costs under the bill; 26% said they had trouble paying for medical care, another 24% paying their mortgage, 21% having been laid off, and 15% having their pay cut or forced to work fewer hours;

-- overall, 70% said they had one or more job or financial related problems in the past year and believe future prospects look grim; only 7% rated the economy excellent or good; most worrisome was jobs, especially for middle and lower income earners;

In addition, 23% have been unemployed for a year or more (3.4 million people). It's affecting nearly all industry and occupation sectors, all age groups, and once unemployed, education helps little. Further, job skills erode. Long-term unemployment is a mark of cain. It makes it harder competing against other candidates, and those affected generally get lower pay in a new job.

Hardest hit have been minorities, men, younger workers, and those less educated or skilled, Pew concluding overall that:

"The nation's long-term unemployment rate is historically high, and it has had a substantial impact on families, government budgets and the country's overall economic health. (Study findings showing) that nearly a quarter of the unemployed have been out of work for a year or more casts new light on the extent of the problem" that promises to be persistent for a long time to come.