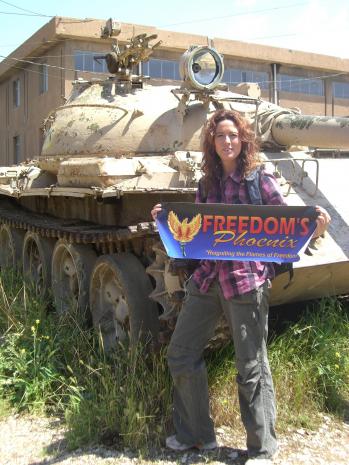 Dear Friends and Loved ones,

This weekend I saw the most beautiful mountains I have ever seen in my entire life, and they are covered with land mines.  These priceless gifts of exploration are inaccessible because years of war has ravaged this country.  I can see why people risk their lives to hike in this area…we were actually close to where the 3 lost hikers were “picked up” last year for crossing into the Iranian border!

On Saturday we headed to the village of Zharawa.  We went there to meet with Bapeer, the spokesman of 9 villages that have been living in an inhumane IDP camp for the past couple of years.  The UNHRC only built 90 tents for 130 families with a population of over 800 people.  The origin of this “dirty deal” is yet to be discovered, but the NGO I am traveling with has been putting pressure on the government and other NGO’s for the past couple of months to make improvements to their camp so that they may have a decent quality of life.  We were unfortunately not able to go into the camp because the team recognized that the villagers did not have the resources to host us – It is custom in Kurdish culture to accommodate guests with water, tea, and a simple pastry during a visit.  We obviously would not have cared if they did not greet us with any of those things, but the team explained that it would wound their personal dignity for not being able to afford a simple cup of tea for a guest.

We met with the leaders of the village in a neighboring abandon village, and to our surprise – they greeted us with a picnic feast!  I ate as much as I possibly could because I knew that these people made great sacrifices to provide us a meal.  We got word that this village was bombed while we were on our trip to the Turkey border, we were actually only 1 hour away from where a bomb had landed and destroyed a field.  We were there partly to investigate and entirely to listen.

On Sunday we drove up farther north and closer to the Iranian border to another small village called Chama.  We met with the mayor of the town, and I honestly got a little out of line asking questions about the U.S Sanctions on Iran and if he thought that would affect their relationship with Iran, as a border town whose village has received attacks in the past.  He didn’t answer my question….politics!

Getting to the village of Chama was by far the most physically straining part of this entire trip!  We had to walk most of the way since our bus was not able to travel up the mountain.  I passed by 34 landmine signs, and the muktar that was leading us to his village told us to stay on the dirt right behind him.  You can imagine my paranoia when he ventured into a field that we had to cross – but I had to trust that this man has lived here his entire life and knows what he is doing.  He actually lost his son to a land mine years ago and was recently injured by a land mine and now has a prosthetic leg. More so, you can image my paranoia following a man across a land mine field with a prosthetic leg!  I found out yesterday that this village received another bomb attack 2 HOURS after we left, and I heard rumor that a few people were killed.  No one said this work was easy, and I am amazed at the courage of not only the NGO team, but also the villagers who press on with their lives as they witness this death and destruction.

On our last day in Iraq, Monday, we visited Halabja and met with survivors of a chemical attack.  I documented several of their stories, but unfortunately had to erase almost everything from my video camera because of the problems we had getting back into Turkey.  You see – the Turks don’t like the Kurds very much; they are not just oppressed by their own people in Iraq.  We had to erase all evidence that we had been doing human rights work among the Kurds while crossing back into Turkey, and again my smile rescued me from having to erase the pictures on my computer!

Now I am back in Turkey, sorry I did not get this update out sooner, but I have been catching up on some much needed rest.  It’s strange – I felt that I would need much time to process everything before returning back to work, but I feel more energized and confident in the movement I am a part of back home.  We are all fighting for our rights and the rights of others – from the very few patriots in the halls of Congress to the peace activists in their local towns.  We fight to improve the quality of human life – because there is a divinity that exists in humanity, a spark of love that is imperishable.  Some sparks are faded and barely recognizable, others glow as bright as the sun.  My spark is spewing out flames like a Fourth of July firecracker – are you ready to get lit!?  I sure as hell am ready to light the fading sparks around me!

Thank you all so very much for your support.  I will do more writing about the overall situation when I return home.  I chose to refrain from my personal opinion in these updates, because they are updates…but I do want to clarify one thing:  I am not and will never be in support of the War and U.S Military Occupation of Iraq.  Removing an evil dictator from power does not, in my mind, justify our actions in the Middle East – especially since our Government helped this regime into power.  I am against this War and all Wars of aggression. I place a tremendous value on human life, and therefore, choose to live my life in a way that promotes peace and non-violent action.  This is why I filed for Conscientious Objector status from the military – I consider myself to be “deployed” on a lifetime mission of peace, because this is the heart of my true faith in God and humanity.

"But there is suffering in life, and there are defeats. No one can avoid them. But it's better to lose some of the battles in the struggles for your dreams than to be defeated without ever knowing what you're fighting for.” ~Paulo Cohelo

Much love and peace,

3 Comments in Response to FreedomsPhoenix represented in Iraq - Tracey Harmon

Just wanted to clear something up.

If you send a threat to the notoyate e-mail address, instead of calling the cops the fake oyate will spam you with goatse, Bluewaffle, tubgirl and anything else encyclopediadramatica.com can muster, or anonymous will just take down our website, as of now we only have one highschool student with a computer from last millenium using stolen wi-fi to bother us but if he gets 5 people with a decent internet connection to help him then we could be in serious trouble.

P.S. If you are feeling adventurous google one of those phrases and click the im feeling lucky button Oyate has and has yet to recover.

And make sure you have people with weak hearts or children or clergy with you when you look at goatse.

Just wanted to clear something up.

If you send a threat to the notoyate e-mail address, instead of calling the cops the fake oyate will spam you with goatse, Bluewaffle, tubgirl and anything else encyclopediadramatica.com can muster, or anonymous will just take down our website, as of now we only have one highschool student with a computer from last millenium using stolen wi-fi to bother us but if he gets 5 people with a decent internet connection to help him then we could be in serious trouble.

P.S. If you are feeling adventurous google one of those phrases and click the im feeling lucky button Oyate has and has yet to recover.

And make sure you have people with weak hearts or children or clergy with you when you look at goatse it will be funny.

Hi everyone this is the fake Oyate nau alot of you have problems with me especially when you take into consideration that I AM THE ONLY ONE POSTING AS THE FAKE OYATES HANCOCKS AND POWELLS HERE.

Well this coward now has an e-mail address for you to send all your hate mail and death threats to.

I can be reached at : notoyate@yahoo.com

Please if you feel like calling me a coward now go ahead i am i will not give out my name or phone number but maybe if you ask nicely i can give you the SPLC number again.