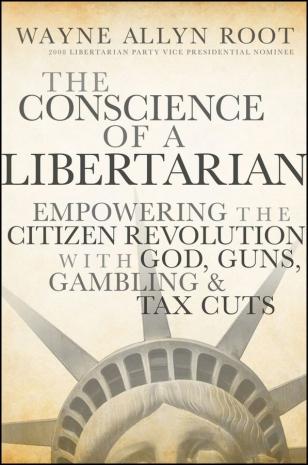 Article originally posted at
LibertyForAll.net
(Link to Judge John Buttrick's Video Review of the book is at the bottom of this page) 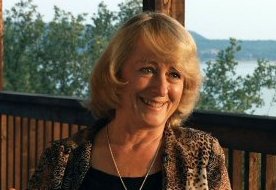 This book might be more honestly titled “Conscience of a Conservative II” or even “Conscience of a Constitutionalist.”  Chapter 2, “The Libertarian Model,” opens with Ronald Reagan’s quote “Libertarianism is the very heart and soul of conservatism.”  The author then describes the history of the New York State Conservative Party which his parents supported; he tells us that he wants to reintroduce the principles espoused by Republican conservative Barry Goldwater.   No mention is made of any libertarian economist or Libertarian Party (LP) member.  The uninformed reader cannot help but come away with the impression that “libertarian” is another name for “conservative.”

Liberals will almost certainly come away with the impression that they are unwelcome in the Libertarian Party. While the author criticizes both Democrats and Republicans, he has nothing but praise for conservatives and offensive comments, almost to the level of “hate speech,” for liberals.

Indeed, Root chokes on the popular slogan “Libertarians are fiscally conservative and socially liberal.”  He insists on saying that libertarians are “socially tolerant” instead.  Since Conscience was originally conceived as a campaign book, why would the author, the LP’s 2008 Libertarian VP nominee, insist on alienating liberals, who constitute almost half of the voting populace, especially when the LP has the solutions to poverty, pollution, and health care that they seek?

The answer to this question may lie in how the author apparently sees himself: as a conservative first, and Libertarian second.  He usually styles himself as a “Libertarian conservative” (page 60), even though libertarianism is generally considered “beyond right and left.” Mr. Root apparently wants to redefine what it means to be a libertarian.

Indeed, Mr. Root can’t seem to get the words out when stating standard LP positions, like ending the Drug War.  He tells us that we must “reposition” the war on drugs instead (page 225).

Similarly, although telling readers he wants smaller government, the author’s proposed solutions often do just the opposite.   He wants to increase the number of Congressional representatives from 435 members to almost 3,000 (pages 201-203).  Mr. Root also wants to pay this gargantuan Congress CEO-level salaries ($500,000-$1,000,000 per year) “so they do not feel desperate to sell out their constituents in order to support their families” (page 202).  Will paying more to those who steal our liberties and our money really stop them—or encourage them?

Why not simply make it illegal for Congress to pass laws favoring one group over another, like taking from Peter to give to Paul?  That would be the Libertarian solution, but our former VP candidate shows little awareness of it.

Mr. Root continues:  “The people who make our laws are very important people.  We should try to pay them enough to attract the best and brightest (page 202).”  Since virtually every law Congress passes violates our individual rights—and will continue to do so unless we place some truly libertarian restrictions on them—do we really want them to do it smarter and better?

The author is undaunted by those who point out that the LP hasn’t yet elected anyone to major national office.  Mr. Root counters that the LP has a great message, “but the missing ingredient up until now has been heart.  I am Stella Root’s son.  I am relentless. I have a bigger heart than a thousand candidates. More heart than all the others that came before me—combined… We have had plenty of intellect, plenty of brainpower, plenty of good ideas, but up until now, not enough heart” (page 347, emphasis in original).

Judging from my three decades of observation, I would say that the LP has heart far beyond what any single person can bring to it.   The Natural Law Party, with better funding and more political connections than the LP, threw in the towel years ago.  The Reform Party, with taxpayer money and a more mainstream message, has self-destructed.  Recently, when National Chair Bill Redpath approached the Constitution and the Green Parties for ballot access help, he learned that both of these groups could barely keep their doors open.

Unlike the Greens, we receive no special interest funding. Unlike the Reform Party, we’ve never accepted matching funds. Unlike the Natural Law Party, we don’t have donors with deep pockets.  Unlike the Constitution Party, we didn’t get Ron Paul’s endorsement.  How is it that the LP, with the most radical message of all, is the only third party that is a recognized threat to the establishment, standing tall when other Parties are on their way to oblivion?

The dedication of thousands of LP members make up the Party’s heart, which beats more powerfully than that of any individual. Many of our seasoned activists forgo the high pay they could get in the private sector to volunteer their time to gather ballot access signatures, run full-time campaigns, staff our state and national organizations, or spread the good news of liberty through their writing.  Others donate their hard-earned money to help support the national office or their state parties.  Many of our members have given, not just for a single year or two like the author has, but for decades, in the face of seemingly insurmountable odds.  The dedication and relentlessness of thousands of LP supporters have created the pulpit on which Mr. Root now stands; he abuses it when he belittles their contributions with grandiose and unsupported self-aggrandizement.

Mr. Root’s dismissal of his LP predecessors is apparent in statements like “I’m the only politician in history who wants to make my office less important” (page xxviii). Every LP presidential ticket has vowed to shrink the power of their offices, but the author appears oblivious.  He also claims to be “… the first candidate to run for president who has the same worries of a typical U.S. voter and taxpayer” (page 99), a patently false statement given his LP predecessors. On page 64, the author claims that he and Barr “attracted a record number of new LP members,” when that honor belongs to two-time presidential nominee, Harry Browne.

Truth may not be that important to Root, though.  On p. 249, he states “I understand that in the end, all that matters is winning. All the principles in the world gain you nothing, if you’re not in power to institute them.  So winning really is everything…”  We’ve heard this argument from the mouth of tyrants everywhere: the ends justify the means.

Is this the conscience of a libertarian?

Dr. Mary Ruwart currently serves as an At-large Representative of the Libertarian National Committee. You can contact Dr. Ruwart at mary@ruwart.com.

December 2009 at the FreedomSummit Judge John Buttrick shares his opinion about the National Libertarian Party's future.
Judge Buttrick details his criticisms of Wayne Allen Root, Bob Barr and the abandonment of principle inside the National Libertarian Party that has encouraged such representations of libertarianism... to the point that we risk becoming irrelevant in American politics.... and the people (and even the media) knows it.
Judge Buttrick received more retention votes for his seat in the 2008 Maricopa County election than the Barr/Root campaign did nationwide.
Watch this presentation and you'll know why.

2 Comments in Response to Should his conscience be your guide?

Have you hugged your grouper today?

Ms. Ruwart's "review" is no such thing. It's just another hit piece against the man who was chosen by a majority of Libertarian Party delegates to be the party's VP candidate in 2008. Maybe it's Ms. Ruwart who is out of step with today's LP, not W.A.R.

St. Louis is going to be quite interesting!

How the Government Used the Pandemic to Crush Small Businesses--and Why: