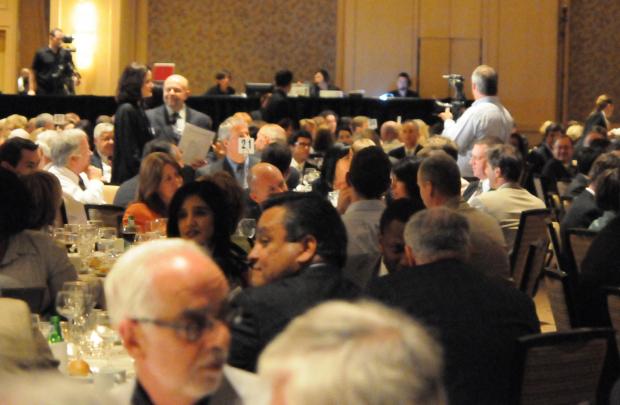 Redflex loses the Arizona State Wide Photo Enforcement contract, and on the same day, Karen Finley has the nerve to show up and recieve a Most Admired CEO award.

Well, I hoped to ask her that exact question myself, but was unable to. If there’s anything to admire about Karen Finley, it’s her bodyguard staff. I got to meet them personally tonight, and let me say that they’re not rent-a-cops, they’re the real deal. I never got within a hundred feet of her.

Bodyguards who kept me from getting anywhere near Finley

I wasn’t about to make a scene, so I got my pics and some video and left shortly threafter, where I was followed to the exit. In retrospect, those guys were watching me closely from the very beginning. In addition to these two, there were probably four to six more of this team in the room.

I learned two things from this encounter… Redflex has a significant budget for Executive Protection, and Karen Finley must be very scared. I only wish Doug Georgiani had half this much protection.

See Karen accept her award and blame the State for the failure of the State Wide Photo Enforcement program below as well as a video of the fun going on outside the hotel. You’ll see the bodyguards doing their thing as well.
See more @ SCAMERAFRAUD.BLIP.TV