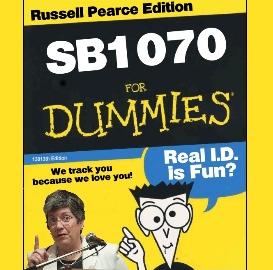 Please spread this link to all that think the Arizona's SB1070 Police power expansion law is so great.

The people who wrote the bill were deceitful, so I can understand why people were hoodwinked.

You have to really examine the bill to notice the flaws in it. Even Alex Jones was fooled on this one. I'm not a politician so I call it like it is.

http://www.azleg.gov/alispdfs/council/SB1070-HB2162.PDF
We've been saying that it's section E, E1 and E2 under 11-1051 on page 1 which contains the exchange of law abiding citizens data with homeland security.
The "final" version of the bill has it in section F, F1 and F2.  Everyone I'm bccing have put E, E1 and E2 in their analysis.  Please change that to F, F1 and F2 and link using the link above which is the most up to date version.
I fully expect that once cogent criticisms of the above version circulate in the news, that Pearce will "find" the "real" final version of the bill and we'll get another version switching sections around again.  Just be prepared.  But right now, the provision handing over law abiding citizens data to homeland security, thereby turning Arizona licenses into national ids, is in 11-1051 F, F1 and F2.  Please update any analyses you have posted.
THIS IS A VIDEO RESPONSE TO  JOHN MORGON
Did the police presume this man in the video below was legal even though he gave them a freaking CDL and social security number?
Furthermore you are not being truthful when you say they do not communicate with DHS if you show them your I.D. You gave no proof of this and the bill says otherwise.
.
I think you are still hoodwinked.I don't believe you watched the entire video above if you do you should get it. P.S. Alex Jones can be wrong sometimes I don't live by his every word besides who live here you or him?

John, I have some ideas in answer to your points. First, let me say you have a valid position, even though I feel the opposite way about 1070.

You state "If the MSM is against 1070, I am for it. I've read the law, and I do not find it sinister." In 1913, the bankers and industrialists launched a massive, public "we're against the Federal Reserve Act" campaign. Secondly, these are democrats. They have to do everything under Left cover. They HAVE to pretend they are "for minorities". It makes perfect sense that they would oppose the bill vociferously in public.

Having said that, this is a hard call. It's not surprising that there is some division among thoughtful individuals. Ultimately, I don't think we can gummint our way out of this problem. I'm not feeling overwhelmed, at the moment, by examples of where hyper-empowering our enforcement bureaucracies has gone very well for us.

After watching your video again, the main problem with your argument that stands out to me is this:  You say big government wants 1070 because it's an expansion of police power, Real ID, tracking the slaves, etc. If that is so, then why are Janet Napalitano & friends speaking out against it so strongly?  If the Feds have wanted this for so many years, why are they prosecuting Arizona to have it repealed?  Your hatred of authority and all forms of government has caused you to overlook the obvious.

I see the sovereign State of Arizona desperately trying to protect itself from the Federal usurpation of power, and I have to believe it is doing the right thing with 1070.  There are a dozen laws going through Ariz. Legislature that fly in the face of Federal control and tyranny.  Despite Arizona's huge problems and all its flaws, I respect and love my state for being a bulwark against the Feds.  I'm sorry that you see all government as equally bad and you're too cynical to see the good our state is doing right now.  I'm an Arizona native and there's no place I would rather live.

I  meant to cite section B (1-4) as evidence for the claim that presenting a valid ID to the officer will cause him to presume you are not here illegally. There is no reason for the officer to go beyond that step in the scope of this law.

I interpret section F (1-4) as provisions for the State of Arizona to protect its ability to implement the law from any Federal interference.

I've seen the 2nd video you posted already, and I can't comment on what happened or why.  It seems strange that the mainstream media is trying to connect that incident, as unfortunate as it might be, to the 1070 immigration law.  The new immigration enforcement hasn't gone into effect yet, and isn't scheduled to go into effect until July 28, 2010.  Anyway, if you're watching and/or believing anything the MSM says you have a problem right there... it's 24/7 government propaganda.  If the MSM is against 1070, I am for it.  I've read the law, and I do not find it sinister.

I ATTACHED A VIDEO RESPONSE TO JOHN MORGON
Did the police presume this man in the video below was legal even though he gave them a freaking CDL and social security number?

Furthermore you are not being truthful when you say they do not communicate with DHS if you show them your I.D. You gave no proof of this and the bill says otherwise.

I think you are still hoodwinked.I don't believe you watched the entire video above if you do you should get it. P.S. Alex Jones can be wrong sometimes I don't live by his every word...besides who liveS here you or him?

You're wrong on this one, 4409.  They will only communicate with DHS if you fail to provide a driver license or other ID during a lawful police stop.  You provide ID, you are presumed not to be an illegal alien, and searching the DHS databases doesn't occur.  The fact is, you're already required to provide ID during a lawful police stop, so nothing will change for you.

Alex Jones isn't wrong on this issue. I want you to take a hard look at exactly who is criticizing Arizona's new immigration law and ask yourself if you want to count yourself among their company.  Barack Obama, Janet Napalitano, Karl Rove, Antonio Villaraigosa, Felipe Calderon... the list goes on and on.  Alex Jones says if the establishment is against something, he is for it; if the establishment is for something, he is against it.