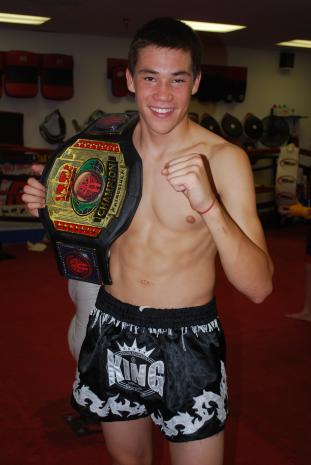 While fathers often hope that sons will follow in their footsteps, sons often want to blaze their own trail, or at least that has been my experience.

I played school sports growing up, but my real passion was Martial Arts and by the time I was a senior in high school I focused all me attention on my Martial Art training, with high aspirations of going pro. I had some modest success in my mid-twenties, but by the time I was thirty, I knew I could no longer hang with the tough new generation. I was washed up, so I retired.

One day while I watched my baby son crawl around, demoralized that I fell just short of realizing my dreams, I made a mental commitment to him that HE would be a champion. So I poured all my attention into his training.  I got him in front of the best coaches; the best training; and we traveled to every worthwhile competition.

Then one day, when he was about 12, he came to me with this mournful look on his face.  “What is it?” I said. “I don’t want to do Martial Arts anymore”, he blurted out as if a he just dropped a huge weight. Panic almost gripped me. “Stay calm”, I thought, “Hear him out”. “Oh, so what do you want to do instead?” I asked. “I want to play baseball”, was his reply.  “Baseball!? But I don’t know anything about Baseball!” I yelled in my head, but said instead, “Okay, we’ll play baseball.”

And so began our chapter in Baseball. We played Little League; we played All Stars; we did Club ball; and of course, private hitting and pitching lessons.  With MLB dreams in his head, this may have been the whole story, but the government stepped in to provide a twist; or public education did to be exact.

See, team sports are big business for public education these days.  Perhaps not when we were kids, but today a high school-er may have to focus on just one sport, if he wants to see any play time at all.  And when the economic “bubble” burst and hit my family’s bottom-line and we had to take our kids out of private school and enroll them in public school, it changed his baseball career forever.

We were completely ignorant to the fact that when we enrolled our son in the high school in our neighborhood, we’d have to go through an inquisition style process to determine his “eligibility” to play sports at his school. They need to check to make sure we weren’t “recruited” or otherwise trying to sneak in a ringer, so we had to provide personal financial records, proof of residency, etc. and endure two hearings.

Once they agreed that our son was a run of the mill teenager and just wanted to play a little ball for his school, we then had to learn, by fire, how to navigate the politics of high school athletics. Everyone has an agenda – The administration, the coaches, the parents and the players.

So by the end of my son’s Junior year, he was demoralized, depressed, and a little burned out on (the politics of) baseball.  I counseled him that a student-athlete has very little control over his destiny in team sports. Even in wrestling, where the individual athlete has more control, the coach and the culture of the team has a great deal of power. Now, an individual sport that is not a school sport, on the other hand, a player can be the master of his destiny.  I reminded him that Martial Arts are such a sport and asked if he would like to give it another go.

At the time, I was so frustrated that those public school bureaucrats were meddling with my son and our family, but now I’m more than a little pleased.  One year after getting into “Muay Thai” Kickboxing, my son won a National Title and a spot on the U.S. Kickboxing Team and with be traveling with the team to Scotland in October to compete in Worlds where it will be determined who are the best Kickboxing athletes in the world.  Government meddling helped make my dreams come true.

You can learn more about Jordan’s adventure and track his progress on his blog at http://jordankickboxing.com. All support and well wishes are welcome and greatly appreciated.

"....by the time I was thirty, I knew I could no longer hang with the tough new generation. I was washed up, so I retired....."

I feel your pain.