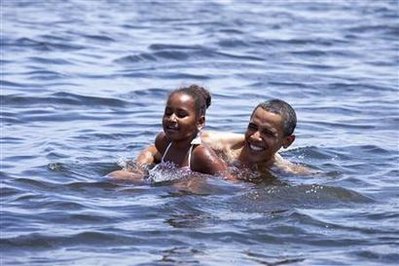 On August 15, AP reported that Obama gave his "personal assurances of (the) Gulf's safety," saying:

"Beaches all along the Gulf Coast are clean, they are safe, and they are open for business."

"Barack Obama has taken a swim in the Gulf of Mexico (to) reassure Americans that the waters are safe despite the recent oil spill."

US corporate media reporters repeated the message, CNN's senior White House correspondent Ed Henry among them, saying "Obama takes (the) plunge, swims in the Gulf (to show it's safe and) open for business."

In fact, area businesses continue to be severely impacted, and the entire region is dangerously unsafe.

As for Obama's swim, on August 16, the London Independent reported that Obama and his daughter, Sasha, swam in a private Panama City Beach, FL beach off Alligator Point in St. Andrew Bay, not part of the Gulf.

Reporters were banned, no TV video permitted. "So....only the White House photographer was allowed to capture proceedings. The official picture was intended to provide evidence that the region's beaches are back to normal."

False. A dangerously toxic oil/dispersant brew contaminates much, perhaps the entire Gulf. It's poisoned and potentially lethal for decades, maybe generations. Nothing in it should be ingested. Millions in the region are at risk. No one should swim in coastal waters or eat any Gulf seafood. Responsible officials should ban it. Instead the all-clear's been given.

Obama, his officials, and BP executives are criminally liable. So are state governors, coastal mayors, and regional health authorities.

Area residents with children should leave. Tourists should avoid the region. A growing catastrophe will continue for decades, including a silent epidemic of cancers and other diseases, as well as lives and livelihoods lost.

1 Comments in Response to Obama's Gulf Swim Was Fake

Everything Obama claims, other than being a Muslim (by mistake during an interview prior to his election) has been a lie.  He, and his administration, view the American public as stupid, naive, and gullible.

It's time for a REAL change in November.  Castrate NObama via a conservative Congress.  Get out to vote, but only once.

The Bitcoin Energy Debate Is One Of Freedom Versus Servitude