The two charges were “obstructing the highway” and “resisting an order directing, regulating, or controlling a motor vehicle,” and involved an incident on April 14, 2009, when Pastor Anderson refused a warrantless search of his vehicle at an internal border patrol checkpoint at mile marker 78 of eastbound I-8, 75 miles east of Yuma, AZ (55 miles north of the international border). The 1 hour and 15 minute standoff ended with Border Patrol and Arizona DPS officers shattering out the car’s windows, tasering Pastor Anderson for 18 seconds, and maliciously shoving his face into broken glass and roughing him up before taking him to the hospital and then ultimately to jail.

A six person jury from Wellton, AZ, found Pastor Anderson of Faithful Word Baptist Church not guilty on the count of “obstructing the highway.” When asked why, one of the jurors stated that “they were the ones who stopped [Pastor Anderson] and caused [him] to be in the roadway against [his] will, and they had no right to send [him] to secondary to be searched.”

A few new facts about the incident surfaced in the course of the two day trial as the state’s witnesses were questioned and cross examined. A detective with DPS who is an expert in dog handling and dog training and which had actually had experience with the border patrol K-9, “Jerry C”, that supposedly alerted to “concealed humans or narcotics” in Pastor Anderson’s vehicle, explained that the dog did not actually alert to the Pastor’s vehicle. In his words, the dog “was on the fringe” or on the verge of an alert by dragging its handler toward the vehicle, but that an actual alert would have consisted of the dog sitting down where the supposed contraband was located. The dog never sat down.

Another interesting piece of testimony was when DPS Officer Jones and DPS Officer Jeff Mitchell were questioned about the photographs showing large amounts of Pastor Anderson’s blood in the exact shape of his head on the jagged broken glass of what used to be the driver’s side window. Both officers stated that they had no clue as to how or why the Pastor’s head made contact with the jagged edge of the window. According to Pastor Anderson, one of the border patrol agents grabbed his head and purposely shoved it down into the broken glass while he was being tasered in order to “control” his head. The DPS officers stated that they were too far away to see Pastor Anderson being extracted, but that in all their many years of experience which included extracting people through open car doors many times, no one’s head had ever made contact with the broken window sill. 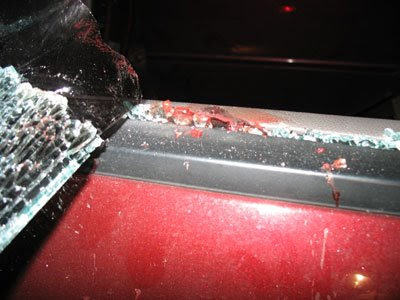 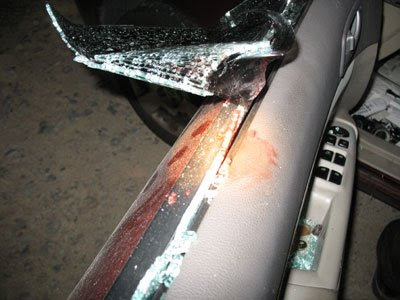 The two “not guilty” verdicts beg the question of why the Pastor was tasered and brutalized since according to Arizona statute, he had not broken any law. Pastor Anderson is suing the DPS and US Border Patrol on five counts: Negligence and/or Gross Negligence, False Arrest and Imprisonment, Intentional Infliction of Emotional Distress, Assault and Battery, and 42 U.S.C. § 1983 (Deprivation of Constitutional Rights).

As one of the six jurors shook Pastor Anderson’s hand on his way out of the courtroom, the juror told him, “Thanks for standing up for our rights as Americans.”

Let's say he was GUILTY AS CHARGED on BOTH counts.

Is that the way he should be treated for such ?

General Patton said Static positions are monuments to mans stupity... in that regard the likes of these checkpoints serve nothing more a that flagflying exercise, Sorry that these 'Backwoods men' did this to you, Where's Phil Ochs when you need him...Check out his singing , 'Here's to the State of Misissippi' it may give you some solice...regards from Ireland  Malachy