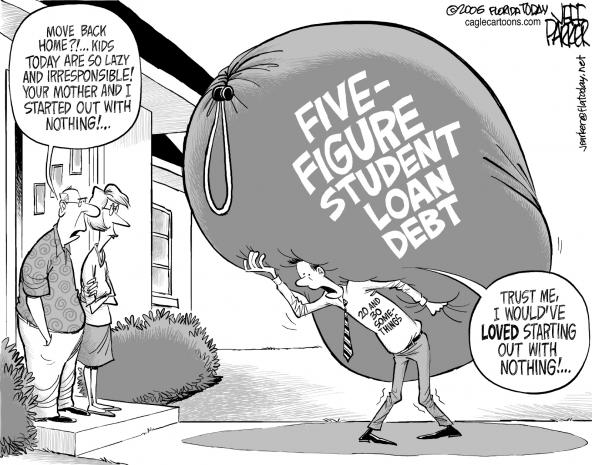 Like the old "Let's Fall in Love" lyrics: Bankers do it. Insurers do it. Even (privatized) universities with poor students do it. They steal and get away with it, a Danny Weil August 18 Daily Censored article titled, "Whistleblower Exposes How Kaplan University Cheats Low-Income Minority students and the Washington Post (parent company) Benefits." More on it below.

Kaplan calls itself "an institution of higher learning dedicated to providing innovative undergraduate, graduate, and continuing professional education. Our programs foster student learning with opportunities to launch, enhance, or change careers in today's diverse global society. The University is committed to general education, a student-centered service and approach, and applied scholarship in a practical (online or campus) environment."

It's part of Kaplan Higher Education Corp., part of Kaplan, Inc., a subsidiary of The Washington Post Company, producing over half of its revenue and profits - its real commitment, not students.

Elma from Washington reported her experience after attending Kaplan's Legal Studies program. In December 2008, she said:

"I have to concur with" other complaints. "Kaplan's professionalism only extends as far as their sales training goes. They are not (academically) minded, but purely monetarily motivated - hence the magic number of $12,000," a notification saying "you are $12,000 in the arrears on your tuition, therefore we will be blocking you from classes."

The Veterans Administration (VA) paid Elma's tuition. They intervened. Kaplan retracted its statement, then told the VA she was blocked for not filling out a FAFSA (Free Application for Federal Student Aid).

In fact, they're voluntary, and since the VA paid Elma's full tuition, it wasn't needed. She explained further, saying:

Here's why they require it - "Because as (others encountered), they use your information to obtain monies that (students) don't see - but will be responsible for."

Alma challenged them and involved the Department of Education. Her access no longer was blocked. At issue is why it was in the first place. While at Kaplan, she "had nothing but problems," including:

-- discrimination by instructors; she complained, was transferred to another one who was uncertified by the Kentucky Bar Association, lying by claiming otherwise;

-- complaining about any Kaplan educational experience is fruitless; "it's a waste of time;" no matter how justified, it won't "go in your favor....;"

-- "Kaplan also takes advantage of minorities and low income" students, getting them hugely in debt, delivering less than they promise, sometimes nothing, and earning large profits as a result;

-- "Kaplan advertises they cater to working adults, (but) they treat (them like) we are ignorant or juvenile."

Alma said Kaplan should be sued and put out of business for not delivering on promises, defrauding students for profit.

In January 2009, Cary (from North Carolina) also said "Kaplan should be put out of business." Two terms from graduating, he was told he owed $7,000. He thought his tuition was subsidized. Apparently it was exhausted, but Kaplan hadn't told him earlier, and "They never offered any other type of financial aid other than alternative loans" he wouldn't use. Angrily he accused them of operating like Enron and Worldcom, scamming students for profit. "We must fight them back," he said, "because we have worked too damn hard for (our) education!!!"

In October 2006, Carrie (from Illinois) called Kaplan's Boca Raton, FL facility a "scam school." It promised she'd get no unexpected bills, have a student loan of around $26,000, and be able to complete her education trouble-free. Not so.

After two terms, she got a letter saying she was $1,851 in arrears to be satisfied before she could continue her course work. When inquiring why she owed money, she was told her aid only covered three classes per quarter, and she owed for the last two terms. Yet her advisor and financial aid information assured her everything was in order, her scholarship covering the extra classes.

Nonetheless, the harassment continued. The initial arrears more than doubled to $3,975. When she mentioned her scholarship aid, she was told her account said nothing about it. After struggling in vain for straight answers, she got an email stating:

What happened to her scholarships she asked? Why weren't they applied to her account? Like others, she was scammed, saying:

"If anyone at all has a class action lawsuit or is thinking of getting one started, PLEASE contact me. I have the names of several other students (who've) been down this very road and are willing to be part of this as well!"

Two campuses were involved, one in Florida "where undercover government investigators posing as applicants encountered admissions officers who lied about the college's accreditation and admissions-test proctors who coached the investigators on the answers." Recruiters also "scolded and mocked them for being hesitant to take out government-subsidized loans" for tuition.

Encounters were videotaped and played at an August Senate hearing. Kaplan executives did a poor Claude Rains imitation - he as Captain Renault in Casablanca, saying he was shocked, shocked about what he knew was going on. Kaplan officials disingenuously said they were "sickened" about apparent practices endemic throughout its system for years.

They've been accused many times before. At least four pending former employee lawsuits raise similar allegations as the government's. As of June 2010, Kaplan had over 112,000 students enrolled, an 18% increase over the previous year, many easy pickings to rip off for more profits ahead, even in a dire economy.

In his Daily Censored article, Weil explained that Kaplan enrolls poor and low-income students on federal loans, leaving them "indebted and unemployed." A whistleblower exposed the scheme - how hundreds of unsuspecting students are recruited, then abandoned in debt.

Students enrolled in the "CHI/Kaplan Surgical Technology Program....were purposely not being told (that) externship (clinical experience) sites, required for the....program would not be available." If true, it amounts to "concealment fraud, overt misrepresentation and possible theft of Title IV funds."

Yet for years, students were enrolled for an annual tuition cost of around $24,000. "When the fraud was detected....hundreds of students (couldn't) finish their programs and had their personal lives and credit history ruined."

Is Kaplan any different from Goldman Sachs scamming investors, or Prudential Insurance ripping off dead war vets' beneficiaries and getting away with it? Apparently not. In this case, poor and minority students are most hurt, "suffer(ing) garnishment of their wages or (huge) monthly payments beyond their means, while others faced attachment by way of liens on their properties, if they had any." Many won't ever recover from Kaplan's disreputable practices. Yet apparently they continue unabated.

The company uses government Title IV funds "for student loans to pay for tuition." They account for "90% of their revenues," employing "unethical if not illegal methods" of scamming students for profit. Tens of millions of dollars are involved and perhaps thousands of students.

"SurgTech was one of CHI/Kaplan's most profitable programs." Mostly minority female students were enrolled, using Title IV funds. However, Kaplan "signed up more (of them) than their program could serve and continued" enrolling more.

"To cover up the enrollment fraud," CHI/Kaplan "warehous(ed) students - basically telling them to go home....until their externships came up," though Kaplan kept it hidden from authorities to keep Title IV funds coming.

The company "vanished" students from its rolls, listing them as "drops" to shield themselves from liability "without damming the revenue stream and the fiduciary responsibility of the corporation to its shareholders and investors."

Unknown to those enrolled, they were lied to, put in a program Kaplan knew they couldn't complete. "Even top management" knew about the scam from the start. Yet they over-enrolled in day and evening courses, even without promised externships. Up to 90% of students "had no legal or financial resources at all. (They) were desperate and were attending what they thought was a bona fide college" to improve their lives. Instead of being educated, they became trapped "in a quicksand of debt."

After the Department of Education began examining Kaplan's practices, "SurgeTech's program curiously disappeared from CHI/Kaplan's degree offerings" in late 2008. At the time, state agencies "were threatening to withdraw accreditation."

From what's know so far, "Kaplan knowingly, over a ten year period, misled by omission, prospective students, their accrediting body, and the US Dept. of Ed, causing the government to approve tens of millions of dollars of Title IV student loans for a program" enrollees couldn't finish. The entire scheme was fraudulent.

The "newspaper that famously broke the Watergate scandal" buried this one with no mention, even though virtually everyone at CHI/Kaplan up to the company's CEO knew about the "criminal conspiracy and eventual fraud."

Business, however, is business. Kaplan makes money the old-fashioned way. They steal it from unsuspecting poor and minority students, their welfare and futures wrecked from the experience.

The following is an email concerning what I am going through now for Kaplan University…and Ideas of help…They need to be blown out the water! You stated that my EFC (expected family contribution) increased in 2008-2009…but…I was not even working at the time…the year after that I was on unemployment…it’s all in my taxes…I do not understand how you are even getting these numbers. I looked back at the documents and I also have them dated correctly.…I was not the one who submitted them in late back then. My question as well is why did fafsa and you approve that pell grant if there wasn’t an issue then?…Meaning…IT WAS APPROVED…NO ISSUE WAS BROUGHT UP BACK THEN AS WELL! Plus in the documents is still shows approved, with the dates! Why with my taxes this year while I am working am I eligible for pell grants…but back then when I was not working you claim my EFC went up…what are you talking about…they did more than 1 audit through the time I have been here with you. I also had a finance judgment done last year because they raised my EFC and found it a mistake and they yet rewarded me with a pell grant….Look I am sorry I may pay this balance off…but I am still contacting a litigation firm and in the process with dealing with a business lawyer now…I am sure you will get the details here soon enough…I disagree with you…I had never heard of getting approved for a pell grant 3 years ago and then this year it gets taken away from me. I am sorry as well…whatever happens…happens…I am going to fight this. I will pay for a lawyer either way…I still have all my documents and with the proper dates…whatever your people did is your issue to solve… Please check the attachments for the proper dates…like I said the document was on time and approved!…QUIT WITH THE GAMES! I have 2 of these documents in the attachments… the document 2 was dated on 4/17/09 and the document 1 was dated on 6/11/2009 The document 1 was approved on 6/12/2009… I am not paying until I speak to a litigation firm and I’ll wait to see what they say about the matter. I was approved back then and that is what matters the most!…You do not sell someone a house and 3 years later say “oh I am sorry you are denied credit to live here”. www.Computertutorandrepair.net