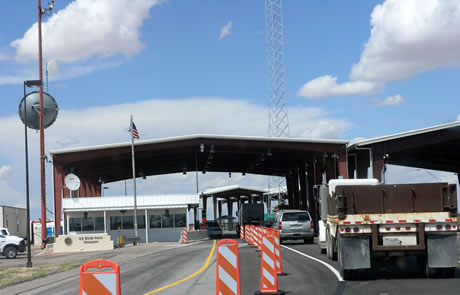 I recently came across an interesting discussion on flyertalk.com regarding a permanent Border Patrol checkpoint located on I-10 in West Texas. Seems that the Border Patrol was going out of its way to harass car drivers with extensive questioning and drug sniffing dogs while just waving commercial truck drivers through without any questioning whatsoever.
Correct me if I'm wrong but it seems to me that commercial trucks are physically capable of transporting quite a bit more illicit traffic than a personal car. In fact, the last time I checked several personal cars can easily fit into the space occupied by a single commercial truck.
Why then would Border Patrol agents manning a permanent checkpoint in the Southwest United States be more interested in harassing private individuals driving personal cars than well-connected commercial truck drivers representing powerful commercial/lobbying interests? This is of course a rhetorical question.
Don't get me wrong. I don't begrudge truck drivers in this scenario at all. I just think the Border Patrol has no legitimate business questioning anyone absent individualized suspicion inside the country and scenarios like this make it obvious how much of a joke these internal checkpoint dog and pony shows really are.
Unfortunately, until a critical mass of people stop putting up with being stopped, seized, detained, interrogated and searched absent consent or probable cause while minding their own business driving down a public highway, this type of targeted abuse of the travelling public will continue.
How does that quote go again....

"The limits of tyrants are prescribed by the endurance of those whom they oppress." - Frederick Douglass

The text of the forum post prompting this blog entry appears below along with a link to the full discussion:

US Border Patrol checkpoint on I-10 in west Texas "I chose to drive back to Dallas from my business trip in southern California so that I could visit my sister in Deming, NM (a small town on I-10 in southern New Mexico), and to see west Texas from the ground. I've flown over it many times but never driven across.
Going east on I-10 after leaving El Paso, there were signs on the highway with flashing lights letting me know of this "inspection station" where everyone has to stop. One lane was for trucks and another lane for cars. I assumed this was to prevent us in cars from having to wait in a long line behind the trucks. Most of the traffic on this desolate stretch of highway is commercial trucks.
The line for cars was about 10 long, and while there were lots more than 10 trucks in their line, I saw the Border Patrol just waving them through, one after another. Meanwhile the car line was barely moving at all.
I was started to get pretty peeved at this delay, because I didn't do anything other than minding my own business driving on the interstate. When I reached the head of the line, I could see what was taking so long... the Border Patrol was asking people in cars lots of questions while another officer with a dog walked around each car!
He asked me "are you a US citizen?" I said yes. Then he asked me where I'm going. I said "What's with all the questions? I'm not crossing an international border." He said "you're in a federal facility, ma'am" I told him I'm going to Dallas. Then he asked me where I had come from, how long I stayed there, and he asked me if I was carrying any illegal narcotics. After I answered those questions, then he said "when was the last time you smoked?" I said "Excuse me?!!" He repeated his question and I said "I am not answering any more of these questions" and then he said "have a good trip" and waved me on.
Since when does the US Border Patrol get to ask people who are minding their own business, driving on an interstate highway in Texas, all these personal questions?
I am going to send a letter to President Obama to let him know that he has no business criticizing Arizona SB 1070 when he needs to clean up his own house first. He is a hypocrite!"

4 Comments in Response to I-10 Checkpoint Dog & Pony Show

Hey Quartzsite Charlie - wait until they try to take away something you hold dear -- then you will cry like a baby, but it will be too late because you stood silently while it still could have been stopped!  If you treasure ANY of your rights, then you must stand up for ALL of them.  I would do so for your cause.  We cannot never forget Martin Niemoller’s warning.

Are you afraid to stand up for your friends and neighbors in Quartzite?  Sadly, it appears that most people in Quartzite are drinking the same kool-aid as you.   It's folks like you that helped Hitler, Stalin and others become powerful, hate mongering dictators.  I am disgusted by your obvious inability to think your way out of a paper bag.  Perhaps you should stay out of the sun until your humanity and common-sense return.

Drug checkpoints inside the country are illegal Quartzsite Charlie. Why would you advocate for government agents to engage in illegal behavior?

Everyone brings illegal drugs into this country... even moms who have children in the vehicle. everyone. anyone who agrues that our officers should look at someone else, must be guilty of something..

I believe this is a social experiment by the bankers to see just exactly what they can get away with.  Or a better way of saying it is ,  they want to see if their mind control tectniques have worked and how well have they worked.

Secret Service Director Will Be Moved To New Role At DHS