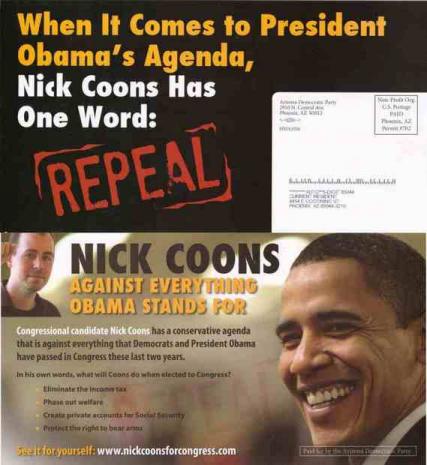 The Arizona Democratic Party has funded multiple mailers attacking Nick Coons and his positions.  The mailers state Coons' opposition to Obamacare, his support of the right to keep and bear arms, his desire to end the income tax, and other views in complete opposition to the current adminstration's.

At first glance, these pieces appear to be attacking Coons, but Democrats and Republicans don't normally spend thousands of dollars attacking their third-party rivals.  Instead, the AZ Democratic Party likely has a very clear goal in mind.

"I can't imagine they'd actually be trying to attack me, since Schweikert is Mitchell's primary opponent," Coons said.  "Most likely they're trying to gain exposure for our campaign in hopes of siphoning votes from Schweikert.  Not that I oppose this.  Republicans can't solve the problems any more than Democrats can."

Coons is much more excited about these "attacks" than one might normally think.  "It's great!  So many more people are learning about our campaign.  I might have been upset if they were making blatantly false claims about me.  The Democrats have spent more money promoting us than we have.  I'm planning on driving to their headquarters to thank them in person."

"The Republicans have been soft on their opposition to the administration and to the current Congress.  They oppose the details of the plans, but not the principle, which is that the government not only has no business involving itself in the affairs of individuals, but couldn't actually solve the problems if it tried.  The Democrats have taken advantage of this opening by sending conservative voters to libertarian candidates."