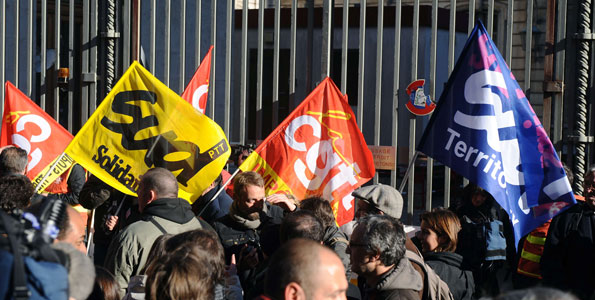 Since early October, France resembles May 1968, at least in part, predatory capitalism again on trial. More on that below. Today it's over austerity moves, not for raising the retirement age to 62 as misreported. It's much more, as Diana Johnstone explained in her article titled, "Collapse of Social Security: French Workers Confront the Neoliberal Policy Agenda," saying:

"For one thing, (public outrage) is an expression of exasperation with the (Sarkozy) government....which blatantly favors the super-rich over the majority of working people in this country." Elected on the slogan, "Work more to earn more," today's reality is "work harder to earn less."

Like in America, public coffers are emptied for the rich. In contrast, "the whole (post-WW II) social security system" is being dismantled in real time "on the pretext that 'we can't afford it.' " Blaming street protests on retirement age changes is a red herring. It's over worker exploitation, favoring the rich, transferring wealth like in America and throughout Europe when ailing economies need massive stimulus, mostly for working people desperate for help.

Instead only capital, investments, and the ability to compete are addressed, neoliberal reforms the prescription when, in fact, they're ruinous for workers. They know it, protest, and continue through strikes and street demonstrations, what's so far absent in America in spite of US workers treated as unfairly.

Also like in America, high finance rules, wage and benefit cuts as well as deindustrialization the price paid. As a result, production moves offshore to cheap labor markets. High-paying jobs vanish, and with them a former way of life. It's a game, "only the financiers can win....And if they lose, well, they just get more chips (handouts) for another game from servile governments" like in France, America, and elsewhere.

"Where will it end," asks Johnstone? A democratic revolution should follow, "a complete overhaul of economic policy," what's very unlikely in France, across Europe or in America, unless conditions get so bad, a combination of hunger, homelessness, and unemployment producing rage enough to demand it. Don't bet, however, on what came close in 1968, a historic moment lost.

Even then, unions backed government power, not their rank and file. Other factors were also in play. In his 1970 book, "Prelude to Revolution: France in May 1968," Daniel Singer asked if a "socialist revolution" was beginning, whether "Marxism (was) returning to its home ground, the advanced countries for which it was designed?"

Indeed so he believed calling the May uprising "a revolutionary situation (that) can occur in (any) advanced capitalist country." It began with student revolts in Germany, Italy, Japan, Mexico, America, France, and elsewhere with the potential for much more.

It was the biggest working class eruption since the 1930s, especially in France when, at its peak, 10 million strong joined students, went on strike, occupied factories, universities, and offices throughout the country, paralyzed it, and nearly ousted the de Gaulle government, for days unable to counter the most profound challenge to capitalism since the 30s and 1917 Russia.

For weeks, direct worker actions in factories and other takeovers continued. "Dual power" was created - the government v. revolutionary action committees, workers wanting "a new form of democracy, including industrial democracy, that does not just rest on an occasional ballot." Their actions "precipitated the biggest general strike in French history, paralyzing the economy and raising, for a brief spell, the question of power in the country."

It could have gone either way under the slogan, "Be realistic, demand the impossible!" Capitalism was on trial, a transition to socialism then possible. Singer believed workers had a chance to take over "a share of the management and then to full management by collective producers." His model embraced two characteristics:

-- students acting before or independently from workers; then

-- workers joining their ranks in support, united against a common enemy, turning rebellion into "potential revolution."

He understood that "workers (couldn't) conquer economic power under capitalism as the bourgeoisie did under feudalism." Their task is harder, but he saw in France the potential for change, working class people acting "in parallel" to achieve it. Years later, he said a better future depends on "structural reforms" or "revolutionary reformism," the kind more than ever needed now with less zeal so far for it, far more in France and elsewhere in Europe, however, than in America.

Despite today's demands, governments remain hardline, unlike in 1968 when political and social concessions were made to retain power. Years later they were lost under Thatcher in Britain, Kohl in Germany and Reagan in America. They began a three decade assault on working class wages, benefits and values, intensified under Clinton, Bush II, Obama, and their European counterparts.

In 1968 France, revolutionary change was possible. The nation was paralyzed, the government powerless. Trade unions lost control to workers with enough strength to take over. It didn't happen because the French Communist Party (PCF), its union ally, the Confederation general du travail (CGT), Pabloite United Secretariat, and its French branches allied to stop it.

Events unfolded as follows. In January, student protests began, at first small, then larger, spreading from one city to another. In Caen, Bordeaux, and elsewhere, workers and students took to the streets. On April 12, a solidarity Paris protest supported German student Rudi Dutschke, shot in Berlin by a right-wing hooligan. In March, students occupied the University of Nanterre administration building. The Paris Sorbonne was then targeted.

On May 3, student leaders planned their next moves. Police responded, clearing the campus disruptively. Students, in return, erected barricades. Arrests followed. The Communist Party opposed student activists, its second in command leader, George Marchais, calling them "fascist provocateurs," to no avail. Events gained a momentum on their own. Protests grew and spread across the country.

On May 8, a one-day western France strike was held. On May 10 and 11, the "Night of the Barricades" engulfed Paris' Latin Quarter. Thousands of students barricaded themselves in the university district. Police stormed it late at night. Hundreds were injured, many arrested. Prime Minister George Pompidou reopened the Sorbonne. Students in custody were released, then a May 13 general strike was called against police repression.

A huge response followed, the largest mass uprising since WW II. In Paris alone, 800,000 filled the streets. Political demands included toppling the government. The Sorbonne and other universities were again occupied. Trade unions tried to limit strike action to one day, but failed. On May 14, workers occupied the Nantes Sud-Aviation factory, holding it for a month.

Across France, from May 15 - 20, hundreds of other occupations followed, including at the country's largest factory, the Billancourt Renault plant, many managers held captive. Worker/action committees demanded higher wages and benefits, shorter working hours, no recriminations, and more worker rights overall.

By May 20, all France was shut down. A general strike paralyzed the country, without calls from trade unions or other organizations. Nonetheless, everywhere, factories, offices, universities and schools were occupied, halting production, commerce, transport and education. Ten million workers participated, two-thirds of the workforce, the most massive strike in French history.

From May 22 - 30, events peaked, but continued into July. According to the French Labor Ministry, 150 million working days were lost, an astonishing number compared to other similar, but smaller, events. By late May, the de Gaulle government lost control. Demands for its resignation grew. On May 24, he addressed the nation on national television, promising a referendum, giving workers and students more rights. It had no impact whatever. Had workers and students kept up pressure weeks longer, they might have brought down the government and headed France for real revolutionary change.

People understand we're "living in an oppressive and unjust society. Only they think there is no way out. (We're) now told that capitalism - call it hell, paradise, or purgatory - is the one system from which there is no possible way out. The great success of our huge propaganda machine (is having) spread the conviction that" there's no alternative (TINA as Margaret Thatcher said). She lied, but as elitists know, their power depends on "our acceptance, our resignation."

Our pundits, preachers and governments "doom as impossible a radical, fundamental transformation of existing society," one infinitely better than today's but open discussions about it are suppressed.

No matter. Recall the French slogan, "Be realistic, Ask for the Impossible." It exhorts us to "recover the conviction that we can change life, changez la vie, through collective political action. When that conviction is regained, all the establishments will once again begin to tremble," knowing change is on the way. The "impossible" is indeed reachable when enough determined people seize it.