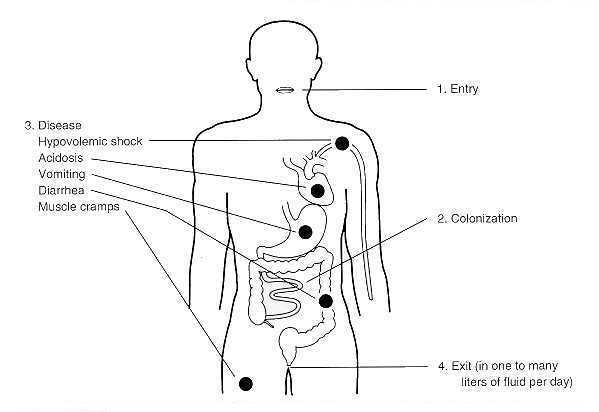 Haiti's Cholera Outbreak: A Disease of Poverty - by Stephen Lendman

On October 22, Reuters confirmed Haiti's cholera outbreak, saying efforts were being made to prevent an epidemic that so far "killed nearly 200 people and sickened more than 2,000," official reports understating the threat.

"A cholera outbreak in a rural area of northwestern Haiti....overwhelmed local hospitals with thousands of sick," according to the World Health Organization. Rural Artibonite, Haiti's main rice-growing area, 62 miles north of Port-au-Prince was struck, though cases were surfacing elsewhere. They're now in the nation's capital where overcrowding threatens a possible epidemic.

Though normally less congested, Artibonite hosts thousands of earthquake victims, most drinking St. Marc River water, contaminated with raw sewage. As a result, a potential disaster there looms as in Port-au-Prince and other parts of Haiti. Dirty water and poor sanitation are the problems, as well as poverty, always the main cause wherever cholera strikes.

Since 1985, Partners in Health (PIH) has done heroic work in Haiti, its "flagship project," delivering care to many thousands of impoverished, malnourished, sick people. On October 26 on Democracy Now, PIH's Dr. Evan Lyon called the outbreak "terrifying," saying it's very fast-moving. Without help, adults die in 24 hours. "For the young, for the old, for vulnerable people," it's often 12 hours.

Most alarming is that "In a country where at least 70% (some say 90%) of people have no access to (clean) water or (proper) sanitation, (they) can't protect themselves." Haitians have no experience with the disease. "Their immune systems have no exposure, which will help the disease spread more rapidly....So the country is terrified at this point."

"It's probably clear to us that this will not go away for several years. We'll need to (stay vigilant). This front-full surge of cases will come down, but there will probably be sporadic cases in the future, now that the bacteria is well established in the environment."

The first cases were confirmed about a week earlier. Then cholera exploded and made headlines. It struck a prison in Mirebalais near St. Marc where Lyon used to work. At least six deaths were reported, another 25 confirmed ill. The prison houses about 250 inmates, at least 80% awaiting trial, not convicted of a crime. Most, in fact, are likely innocent. Yet all of them were exposed, can't get out, are malnourished, and get unsafe water under "horrible sanitation conditions....So people (there) based on accusations (alone) have now been handed a death sentence," Lyon explained.

More frightening is that "cholera will not go away in Haiti until the underlying conditions" change, meaning poverty, hunger, malnutrition, unsafe water, poor sanitation, densely populated neighborhoods, and overcrowded outdoor camps for up to 1.5 million in and around Port-au-Prince.

Wherever there's poor infrastructure, "this disease will be around....it's a very frightening time for the country," authorities understating the danger or potential numbers already affected. It's likely thousands more than reported, most ill, others dead or dying, even though reports now say conditions are stabilizing.

Located in St. Marc, St. Nicholas Hospital's courtyard had, "Scores of children and adults....doubled over or stretched out on every available surface, racked by convulsive stomach disorder or limp with dehydration." For them, life hangs in the balance. Most treated in time pull through, Medical News Today's Christian Nordqvist saying it's done "with cheap and simple antibiotics, fluids and oral rehydration solution." Otherwise, death is painful and likely.

"Many people in our neighborhood have died of diarrhea and vomiting," said Gerda Pierre, her son, aged four, stricken with the disease like many others. Through October 31, the reported death toll was 337 with over 4,000 confirmed ill, mostly in central and northern Haiti, though small outbreaks in Port-au-Prince are alarming. UN and local health officials warned of a potential epidemic, putting "tens of thousands" or more at risk.

So far, only scattered Port-au-Prince cases have been reported that could spread uncontrollably if not checked. Worrisome, however, is whether greater numbers aren't known or have been unreported, as well as outbreaks in other areas.

The Pan American Health Organization (PAHO) calls cholera an intestinal infection caused by "toxigenic Vibrio cholerae, group O-1 or O-139." It results from natural or man-made disasters, resulting in overcrowding; unsafe water; poor sanitation, including improper elimination of human waste; and contaminated food. Symptoms include uncontrollable diarrhea, with or without vomiting, producing dehydration and early death if not treated.

A Brief History of Cholera

Since first emerging over 200 years ago in Calcutta, India, it's killed millions. From 1817 - 1823, it spread from India to Southeast and Central Asia, the Middle East and Russia, ravaging areas struck.

Monitoring the situation, PAHO said suspected cases are in Haiti's Northern and Southern areas, as well as confirmed ones in Gonaives, Haiti's third largest city. Twenty or more cases in Port-au-Prince are being investigated. Likely there are many more unknown or unreported.

An earlier article explained that Haiti is no stranger to adversity and anguish, after over 500 years of oppression, slavery, despotism, colonialism, reparations, embargoes, sanctions, deep poverty, starvation, disease, unrepayable debt, and calamities like destructive hurricanes, the January earthquake, and now cholera.

It's an old story for Haitians, including US domination for nearly two centuries, bringing misery, not aid to needy people, a story that repeated in January that continues. Instead of delivering massive amounts of food, water, medical care, shelter, and immediate steps to clear rubble and rebuild, in came Marines and paratroupers, occupying the country repressively with UN Blue Helmets, never there for peace.

Haiti was reopened for business, its people to be exploited, not helped. Billions of dollars of pledged or delivered aid is earmarked for development, not essentials to those in need under crisis conditions. For example, Washington promised over $1.1 billion. It's yet to be delivered, and whatever comes will go to profiteering NGOs, as well as for corporate ventures, upscale housing, and resource development, including projects George Bush and Bill Clinton are promoting.

For America, the West, Haiti's oligarchs and its government, homeless, malnourished, mistreated, and sick Haitians are of no concern, including those affected by cholera. Only predatory imperial interests matter, preying on the many for the few, millions of Haitians easy pickings to exploit. Their struggle for liberation continues.

1 Comments in Response to Haiti's Cholera Outbreak: A Disease of Poverty

For this writer to blame the United States and the rest of the world in the 21st Century for Haiti's evil conditions is wrong and shows no understanding whatsoever of the history of that island.  For the most part - and certainly for the last 150-200 years, the people of Haiti have brought their misery and poverty on themselves.  It is a land of slaves ruled by slaves, who periodically trade places.  It is also a nation of pirates and thugs who have treated the rest of the world (to the extent they could get away with it) in the same way they treat each other. It is fine to blame the Spanish and French of the 1500s and 1600s for today's Haiti, but why not also blame them for the mess in Quebec, Louisiana, Nova Scotia, and Texas?  Haiti's people made this mess, and ultimately, throwing billions at it and every volunteer in the Peace Corps will do nothing - THEY have to solve it themselves.  Cholera is a disease that flourishes when people don't know how (or don't want) to take care of themselves - like lame-brain emigrants on the Oregon Trail in the 1850s - it doesn't take 21st (or even 20th) century technology to defeat it.  But it DOES take people who are willing to accept responsibility for their own lives, families, and communities.  Haitians never have been: they bred it out of themselves a long time ago.