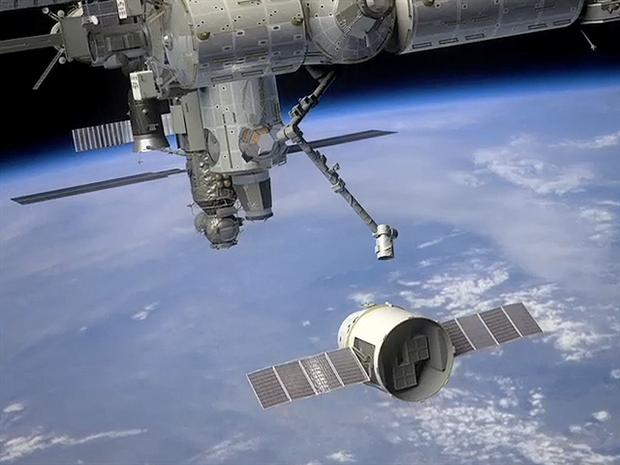 Next mission?
On December 8, SpaceX became the first commercial company in history to re-enter a spacecraft from Earth orbit.  SpaceX launched its Dragon spacecraft into orbit atop a Falcon 9 rocket at 10:43 AM EST from Launch Complex 40 at the Cape Canaveral Air Force Station in Florida. The Dragon spacecraft orbited the Earth at speeds greater than 7,600 meters per second (17,000 miles per hour), reentered the Earth’s atmosphere, and landed just after 2:00 PM EST less than one mile from the center of the targeted landing zone in the Pacific Ocean.

The Dragon spacecraft landed in the Pacific Ocean 3 hours, 19 minutes and 52 seconds after liftoff--less than a minute after SpaceX had predicted and less than one mile from the center of the landing target. Photo: Kevin Mock / SpaceX. Click photo for video of mission highlights.
This marks the first time a commercial company has successfully recovered a spacecraft reentering from Earth orbit.  It is a feat previously performed by only six nations or government agencies: the United States, Russia, China, Japan, India, and the European Space Agency.

Image above illustrates COTS Demo 1 mission orbital path.  The yellow triangle over the Atlantic ocean marks Dragon’s initial separation from Falcon 9, and the yellow square off the Western coast of the United States marks the location where Dragon landed.
Dragon’s first-ever on-orbit performance was 100% successful in meeting test objectives including maintaining attitude, thermal control, and communication activities.  While in orbit, eight free-flying payloads were successfully deployed, including a U.S. Army nanosatellite—the first Army-built satellite to fly in 50 years.

The Falcon 9 launch vehicle carrying the Dragon spacecraft, climbing from the launch pad. Photo credit: Chris Thompson/SpaceX
Liftoff marked the second flight of SpaceX’s Falcon 9 rocket, which performed nominally during ascent. Nine Merlin engines, which generate one million pounds of thrust in vacuum, powered the first phase of flight. The rocket reached maximum dynamic pressure (the point at which aerodynamic stress on a spacecraft in atmospheric flight is maximized, also known as Max Q) approximately 1.5 minutes after launch.  The first stage separation occurred a little over three minutes into flight.  The single Merlin Vacuum engine of Falcon 9’s second stage then ignited to continue carrying the vehicle towards its targeted orbit.

After stage separation, flames are barely visible around nozzle as the second stage engine ignites and the first stage falls back to the Earth below.  Photo credit: SpaceX

High contrast view of the Dragon spacecraft (circle at center) viewed from the top of the second stage as it departs over the curved horizon of the Earth. The rectangles indicate locations of three of the nano satellite deploying P-PODs carried on this mission. Photo Credit: SpaceX

After separation of the Dragon spacecraft, the second stage Merlin engine restarted, carrying the second stage to an altitude of 11,000 km (6,800 mi). While restart of the second stage engine was not a requirement for this mission (or any future missions to the ISS), it is important for future Geosynchronous Transfer Orbit (GTO) missions where customer payloads need to be positioned at a high altitude.

Shortly after separating from the second stage, the expected loss of signal occurred as the Dragon spacecraft passed over the horizon as viewed from the launch site   We reacquired Dragon's video signal as expected as it passed over Hawaii, delivering the first ever video sent from Dragon on orbit.

View from orbit from the side window of the Dragon spacecraft, received via video as it passed over Hawaii during its first orbit.  Photo Credit:  SpaceX.  Click photo for video.
Draco thrusters, each capable of producing about 90 pounds of thrust, began the six minute deorbit burn at T+2:32.  For this particular mission, we could have lost two entire quads and still returned to Earth with only 8 or 10 engines working, but all thrusters performed nominally during the COTS Demo 1 flight.

SpaceX chose PICA for its proven ability.  In January 2006, NASA's Stardust sample capsule returned using a PICA heat shield and set the record for the fastest reentry speed of a spacecraft into Earth's atmosphere — experiencing speeds of 28,900 miles per hour.

NASA made its expertise and specialized facilities available to SpaceX as the company designed, developed and qualified the 3.6 meter PICA-X shield it in less than 4 years at a fraction of the cost NASA had budgeted for the effort.  The result is the most advanced heat shield ever to fly.  It can potentially be used hundreds of times for Earth orbit reentry with only minor degradation each time – as proven on this flight -- and can even withstand the much higher heat of a moon or Mars velocity reentry.

Artist’s rendition of Dragon, thermally protected by SpaceX’s PICA-X advanced heat shield, reentering Earth’s atmosphere.  Photo Credit:  SpaceX
At about 10,000 feet, Dragon’s three main parachutes, each 116 feet in diameter, deployed to slow the spacecraft's decent to approximately 16-18 ft/sec, ensuring a comfortable return ride that will be required for manned flights.  Oversized parachutes are critical in ensuring a safe landing for crew members.  Even if Dragon were to lose one of its main parachutes, the two remaining chutes would still ensure a safe landing.

The SpaceX crew brought Dragon back to the barge where the crane lifted it from the water. Photo: Mike Altenhofen / SpaceX

The Dragon spacecraft, in excellent condition after its 50,000 mile mission, rests in its cradle for the 500 mile ride back to Los Angeles. Photo: Mike Altenhofen / SpaceX

This was the first flight under NASA’s COTS program to develop commercial resupply services to the International Space Station.  After the Space Shuttle retires, SpaceX will fly at least 12 missions to carry cargo to and from the International Space Station as part of the Commercial Resupply Services contract for NASA.. The Falcon 9 rocket and Dragon spacecraft were designed to one day carry astronauts; both the COTS and CRS missions will yield valuable flight experience toward this goal.

With recovery of the Dragon spacecraft, SpaceX became the first company in history to successfully re-enter a spacecraft from Earth orbit.  SpaceX has only come this far by building upon the incredible achievements of NASA, having NASA as an anchor tenant for launch, and receiving expert advice and mentorship throughout the development process.

SpaceX would like to extend a special thanks to the NASA COTS office for their continued support and guidance throughout this process.  The COTS program has demonstrated the power of a true private/public partnership and we look forward to the exciting endeavors our team will accomplish in the future.  For more information on the COTS Demo 1 flight, check out the mission press kit located here: http://www.spacex.com/downloads/cots1-20101206.pdf.