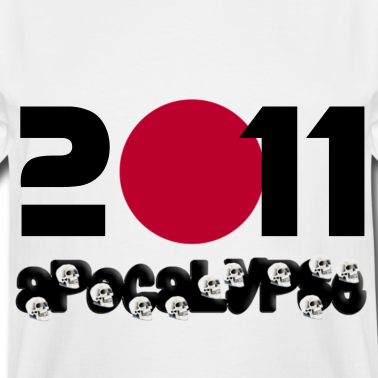 Fukushima's disaster will scar much, perhaps all of Japan for generations, including fetuses and newborns to be genetically harmed by radiation poisoning.

"The government's Nuclear and Industrial Safety Agency (NISA) upgraded its provisional evaluation based on an estimate that radioactive materials far exceeding the criteria for level 7 have so far been released into the external environment...."

NISA and Japan's Nuclear Safety Commission (NSC) estimate that 370,000 - 630,000 terabecquerels of radioactive materials have been released from Units 1, 2 and 3. One terabecquerel equals one trillion becquerels.

In other words, with no crisis resolution in sight, enormous radiation amounts have already been released since March 11. Northern Japan has been contaminated. The rest of the country has been affected, and so have the Pacific rim and Northern Hemisphere.

In fact, rating Fukushima Level 7 understates it, especially since radiation emitted will continue for an indeterminate period - at least months, maybe years.

"The decision to raise the alert level to 7....amounts to an admission that the accident....is likely to have substantial and long-lasting consequences for health and for the environment."

The IAEA describes level 7 as:

"A major release of radioactive material with widespread health and environmental effects requiring implementation of planned and extended counter measures."

"An event resulting in an environmental release corresponding to a quantity of radioactivity equivalent to a release to the atmosphere of more than tens of thousands of terabecquerels."

"With such a release, stochastic health effects over a wide area, perhaps involving more than one country, are expected, and there is a possibility of deterministic health effects. Long-term environmental consequences are also likely, and it is very likely that protective action such as sheltering and evacuation will be judged necessary to prevent or limit health effects on members of the public."

The Japanese government confirmed "that the amount of radiation released into the environment has reached a new order of magnitude. The fact that we have now confirmed the world's second-ever level 7 accident will have huge consequences for the global nuclear industry. It shows that current safety standards are woefully inadequate."

Even a Toyko Electric (TEPCO) official admitted, "The radiation leak has not stopped completely and our concern is that it could eventually exceed Chernobyl."

In fact, it's multiples worse. Nothing tried so far contained it, and vast amounts of radiation are contaminating a widespread area, including offshore, spreading it globally.

"It may take 10 years to start removing damaged nuclear fuel from (Fukushima), but the plant's operator is adamant not to bury the damaged reactors while fuel remains in them, a company official has told the Mainichi."

Instead of entombing Fukushima, at least four reactors will be decommissioned. The process normally takes 20 - 30 years, but Unit 1 and perhaps others will take longer as "specialized equipment" must be developed to remove damaged fuel.

As a result, "it will take 10 years before workers can start removing fuel...."

Fukushima is about as stable as "hang(ing) by your fingernails off a cliff, and (they're) begin(ning) to break one by one."

The disaster progressed "in three acts:

(1) The earthquake and tsunami, knocking out "all emergency cooling systems simultaneously" at three or more reactors, "and all hell has broken loose."

(2) Enormous "damage done to the cores of (at least) three reactors," causing a disaster perhaps spinning out of control.

(3) "With the cores covered with seawater and fresh water, the workers are desperately trying to hit rock bottom, so they can begin recovery operations."

However, the bottom hasn't been reached. Radiation leaks are found "everywhere." Workers don't know precisely where they're coming from. Most likely is "a direct contact between melted uranium (called "corium") and the cooling water, probably caused by a pipe break or, more ominously, a pressure vessel that has completely melted through."

Kaku equates workers to the little Dutch boy, trying to plug a dike leak but finding others. However, until they find the primary source, radiation contamination will keep spreading.

Moreover, "(t)ime is not on their side. The longer it takes to hit rock bottom, the more the danger of evacuations of workers and damage to" the entire area's economy. In addition, severe aftershocks persisting for months risk more damage causing greater contamination.

"It's also a Catch 22: they need to flood the cores with water, but this water becomes contaminated and flows out to the environment. Damned if they do, and damned it they don't."

Under the best case scenario, "(w)orkers have a long, long way to go....I get a headache just thinking of all the measures that have to be taken just to reach rock bottom and then to begin clean-up operations. Meanwhile the clock is ticking," exacerbating a nightmare without end.

Japan's Asahi Shimbun reported a Hiroshima and Kyoto Universities' study showing radioactivity in soil samples beyond the 30 km evacuation zone is up to 400 times above normal, saying:

"The predicted changes in the level of radiation at the ground surface were calculated after analyzing the amounts of eight kinds of radioactive materials found in the soil and taking into consideration the half-lives of each material."

"The study results are considered more accurate than the study conducted by the science ministry, which only released information concerning two types of radioactive material."

Scientists "collected soil samples from five locations in the village at depths of five centimeters. All the locations were outside the 30 km radius and were by roadways in various hamlets. The study found Cesium-137 at levels between about 590,000 and 2.19 million becquerels per cubic meter."

"After the Chernobyl accident....residents who lived in areas where Cesium-137 exceeded 555,000 becquerels were forced to move elsewhere. The amounts of Cesium-137 found in litate were at most four times the figure from Chernobyl."

Further, if emissions continue, Cesium-137 levels will keep rising. "Calculations were also made of changes in" air radiation levels one meter above contaminated soil. Estimates are that three months after the disaster, "between 7 and 21 microsieverts per hour (will be) emitted from the contaminated soil into the air."

Residents during the period would thus be exposed "to between 30 and 95 millisieverts....Assuming the Cesium remains in the soil," accumulated radiation after one year "could be between 70 and 200 millisieverts."

Japan's government may set a 20 millisievert one-year limit as an "indicator of whether and evacuation instruction should be given."

Crop contamination is critically important, especially rice as planting season begins. On April 8, in light of the risks, Agriculture Minister Michihiko Kan banned it on soil containing high Cesium levels. Much, perhaps all, of Japan's crop is affected, potentially for years.

Contaminated US Milk and Water

Milk is especially important as it suggests the health of the entire food supply because cows eat grass. When it's contaminated, so is everything grown in the same soil.

At least 14 US cities reported unsafe radiation amounts in drinking water. However, EPA is only testing for Iodine-131, not Cesium, Uranium or Plutonium, all emitted from Fukushima. Moreover, current readings were taken over two weeks ago, suggesting daily they increase.

Nonetheless, EPA has consistently downplayed the risks, suppressing the growing danger to millions. So has TEPCO, Japan's nuclear agencies, and government officials. In fact, no safe level of radiation exposure exists. According to Jeff Patterson, former president of Physicians for Social Responsibility:

"There is no safe level of radionuclide exposure, whether from food, water or other sources. Period. Exposure to radionuclides, such as Iodine-131 and Cesium-137, increases the risk of cancer. For this reason, every effort must be taken to minimize the radionuclide content in food and water."

In it, he lists "rules for understanding nuclear meltdowns and why they happen," including:

(1) Nuclear technology is "pseudo-science and is not based on proper scientific experimentation." For example, after an accident, reactor damage results in "broken controls, computer systems, and gauges that make monitoring" hard to impossible.

(2) Commercial nuclear power is "based on voodoo economics." Multiple issues include nuclear waste, insurance and construction funding, decommissioning, and more.

(3) The nuclear industry is doing its best to self-destruct, and take humanity and the environment with it.

(5) Believing and promoting the hoax of nuclear safety.

(7) Radiation safety is an oxymoron. Every dose is an overdose.

(8) Radiation poisoning causes cancer and other diseases, including to future generations. The only safe amount is none at all, why it's essential to end nuclear power in all forms. Otherwise, it will inevitably consume us.

Disaster coverage has been "outrageous." For example, NBC correspondent Miguel Almaguer deceived viewers, claiming "experts are in agreement there's no threat to our water or our food."

On April 1, Charles Osgood on CBS radio's "The Osgood File" was just as deceptive, airing Franklin Roosevelt's "declaration in 1933 that 'the only thing we have to fear is fear itself.' " Of course, Roosevelt referred to economic conditions, not lethal radiation that kills.

Or milk industry PR flack Blair Thompson suggesting what danger. "(W)e live surrounded by radiation every day," as well as dirt, dust, germs, bacteria, viruses, and other hazards harmful enough to cause disease and kill us - none of them a match for nuclear threats.

"Background radiation" alone "causes a level of cancer," the more exposure, the greater the risk. The National Academy of Sciences and other experts explain there's "no safe level or threshold of ionizing radiation exposure."

"I think there is a role for safe nuclear power," when, in fact, nothing short of banishing it is safe. As for topsoil plutonium levels, he attributes them to "various sources," saying that "we're relieved that the levels (are) actually very low, and actually typical of plutonium - natural plutonium contamination in this country."

There's nothing "typical" or "natural" about the most deadly substance known. In fact, a millionth of a gram ingested is lethal.

As the "newspaper of record," The New York Times has spearheaded nuclear disinformation, a March 29 article, for example, headlined, "Alternatives Carry Risks Too," saying:

People overestimate radiation threats. It's "not as great as (others). Indeed, every energy source comes with dangers, from mine or wellhead or the smokestack or tailpipe," downplaying, by far, the greatest of all human and environmental perils.

So do other print and electronic media, concealing truth to promote hazardous nuclear proliferation, the worst of all possible energy choices.