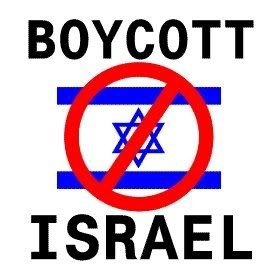 Israeli outrages never quit. Besides lawlessly stealing Palestine, slaughtering and dispossessing its people, occupying its remaining 22% for over 44 years, blockading Gaza, committing high-seas piracy and murder to keep out humanitarian aid, and arresting European and other human rights advocates showing up to protest, another example highlights Israel's rogue state status.

Despite vocal opposition, the bill passed 47 - 38, criminalizing boycott supporters. Provisions include letting boycott targets sue "without having to prove they sustained damage. The court will then decide how much compensation" they're due. Another provision prohibits boycott supporters (people and companies) from "bid(ding) in government tenders."

"Netanyahu has crossed a red line of political foolishness today and national irresponsibility, knowing the meaning of the law and its severity, while giving in to the extreme right that is taking over the Likkud."

In response, Peace Now opened a Facebook page, calling for settlement products, services and activities to be boycotted. A national campaign will follow.

On February 15, the Association for Civil Rights in Israel (ACRI) called the measure "one of the most concerning (ever) anti-democratic propositions....advanced in the Israeli parliament."

Despite strong opposition from MKs, ministry legal advisers, NGO's, and others, the Knesset's Constitution Committee discussed it on February 23.

"The Prohibition on Instituting a Boycott" bill passed a preliminary July 2010 vote. It then went to a Knesset plenary first vote, on to committee, and finally to another two up or down votes, begun July 11.

At issue is prohibiting boycotting Israeli products, persons and activities connected to Israel and Israeli settlements. Moreover, the bill is politically motivated and broad, including Section 2 stipulating:

"It is prohibited to initiate a boycott of the state of Israel, to encourage participation in a boycott, or to provide assistance or information with the purpose of promoting a boycott."

The measure aims mainly at Israeli citizens (including Arabs) and residents involved in advocating boycotts of Israeli or settlement-related goods, services and/or activities, including cultural ones.

Henceforth, persons accused of advocating or participating in boycotts will be subject to civil and criminal prosecutions. ACRI and other human rights groups warned about a broad range of affected activities, including publishing Israeli and settlement-related human rights violations, refusing to travel to settlements or do business with them, and publicly supporting consumer boycotts of their products and services.

Last winter, over 40 Israeli organizations petitioned against the bill, calling it "a dangerous piece of legislation, which tramples on basic rights, first and foremost among them the rights to freedom of expression, protest and assembly."

Even anti-boycott groups signed it, united in believing this type activity is "a civilian, nonviolent and legitimate tool to express opinion and advance social and political change."

The bill's original version included foreign citizens, prohibited from entering and conducting business in Israel for up to 10 years if found guilty. Now removed also was a provision permitting Israel to withhold debts owed other states supporting boycotts, and banning them from doing business in Israel.

ACRI calls boycotts a legitimate tool, commonplace in Israel for many reasons. Criminalizing it "would be unprecedented in any democratic regime. People may find a specific call for boycott irritating and even offensive, yet this is the real test of" free expression, protecting opposition opinions.

Israel's bill also broadens the notion of boycotts to silence and persecute anti-occupation supporters. As a result, "(w)e are once again witnessing the trampling of rights at the hands of the current political majority."

"Those sponsoring this anti-democratic bill claim its goal is to protect Israel from delegitimization. The truth is that this law will only generate more delegitimization because it will truly turn Israel into a far weaker democracy, where supporting any anti-occupation act will be considered unlawful."

"No other democracy has ever advanced an anti-boycott law that intentionally provides a loose definition for what supporting a boycott means and turns a legal, nonviolent tool of protest into a felony, so as to achieve a greater chilling effect on society." It also underscores Israel's pariah status, advancing it one repressive bill and policy at a time.

On June 27, ACRI's El Ad commented on a "more extended and harmful version of the" bill, approved for final reading, saying:

"Why should Israeli citizens be allowed to boycott Israeli cottage cheese, as we have heard and seen in recent weeks, but be barred from boycotting the occupation?"

The updated bill includes sanctions against NGOs and public companies, including stripping their tax exemptions and eligibility for benefits other laws afford. Even funds or property owed Palestinians from other "laws, agreements or governmental decisions" will be lost.

The bill allegedly distinguishes between "legitimate" Israeli criticism and delegitimizing other forms, Israel deciding which is which, some examples including:

-- refusing to recognize Israel's status as a democratic Jewish state.

It also expects Palestinians and Israeli Arabs to accept their lost land, other property, and resources, while buying settlement products and services from Israelis who robbed them.

Moreover, EU 1995 and 1997 Israeli and PLO agreements respectively make member states Prohibition Bill violators for defining Israel as its own territory, and Palestine as the West Bank and Gaza.

Israel's Boycott Bill criminalizes support for these definitions and advocacy if enforcement follows. As a result, European Parliament members expressed support for others opposed to this measure.

Nonetheless, Haaretz writer Lis first said "(t)he governing coalition is expected to" back it. Indeed they have.

Now out, he said parts of the measure edge toward "illegality and perhaps beyond," warning also that the bill "damages the core of freedom of expression in Israel."

Finance Minister Yuval Steinitz advised changing it in committee, but supports the law in principle, saying it doesn't obstruct free expression when, in fact, it does grievously.

On July 11, extremist Knesset members compounded opposition outrage by letting demagogic hate-monger Glenn Beck address the Aliyah and Absorption Committee, saying he showed up "to speak the truth" about efforts to delegitimize Israel.

He also claimed PA demands exacerbate anti-Semitism that's "going through the roof," when American and European studies show it in steep decline. Notably, he once told his Fox News viewers:

"I say on the air all the time. If you take what I say as gospel, you're an idiot."

So are extremist MKs who invited him, making themselves resemble Beck clones.

A. Knowingly publishing a public call for a boycott against the State of Israel will be considered a civil wrong to which the civil tort law [new version] applies, if according to the content and circumstances of the publication there is reasonable probability that the call will bring about a boycott and he who published the call was aware of this possibility.

B. In regards to clause 62 [A] of the civil tort law [new version], he who causes a binding legal agreement to be breached by calling for a boycott against the State of Israel will not be viewed as someone who operated with sufficient justification.

C. If the court will find that an wrong according to this law was deliberately carried out, it will be authorized to compel the person who did the wrongdoing to pay damages that are not dependent on the damage (in this clause – damages, for example); in calculating the sum of the damages for example, the court will take into consideration, among other things, the circumstances under which the wrong was carried out, its severity and its extent.

Regulations pertaining to limitation on participation in tenders:

3. The Finance Minister is authorized, with the agreement of the Justice Minister and the approval of the Knesset's Constitution, Law and Justice Committee, to set the regulations of this matter [special cases where it will be limited] and to limit the participation of he who knowingly published a public call for a boycott against the State of Israel, or who committed to take part in a boycott, in a tender that must to be carried out according to legislation.

Regulations pertaining to the suspension of benefits

A. The Finance Minister, with the approval of the Justice Minister, may decide in the case of someone who knowingly published a public call for a boycott against the State of Israel or committed to take part in a boycott [in special cases] that –

1. He will not be considered a public institution as to clause 9 (2) of the income tax ordinance;

2. He will not be eligible for receiving money from the council of sports gambling according to clause 9 of the law regulating sports gambling, 1967;

3. He will not be considered a public institution as far as receiving support according to clause 3(A) of the budget foundations law, 1985;

4. He will not be subject to the orders of the guaranteeing law on behalf of the state, 1958

The Minister of Justice is appointed to implement this law.

If Israel continues to fight, sabotage, kill and outlaw all those that oppose its Apartheid policies and its war crimes, pretty soon, it is going to ban itself out of existence.