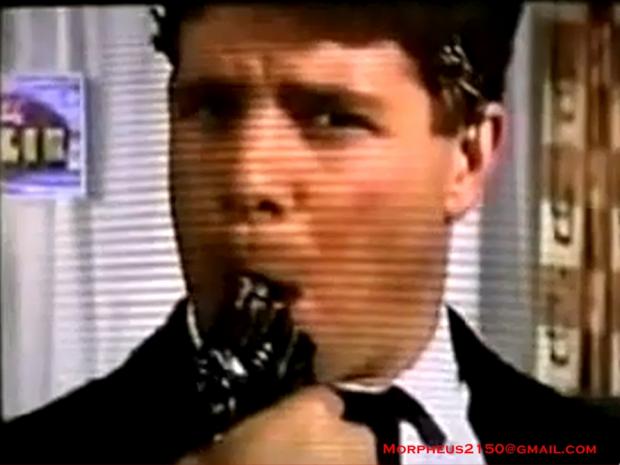 The film takes place in a dystopian future in which the US government mandates total egalitarianism in all things, by having everyone attach wearable mind "handicapping" devices to their heads and showing only mind numbing shows on TV. The story centers on a high school student named Harrison Bergeron whose extreme intelligence makes him something of a pariah. He is ultimately recruited by a secret organization whose purpose is to operate the functions of society that cannot be handled by the unintelligent.

While he thrives in this environment for a time and even meets a girlfriend there, he ultimately pays a personal price and comes to see the true social structure as unethical and immoral, and thus rebels - even if it means making a sacrifice.

Harrison Bergeron lives in a typical suburban town in the near future. The audience is told that after the second American Revolution—a war begun due to an ongoing economic depression that was a result of a combination of technological advancement and a widening disparity between the very rich and the very poor—it was mandated that all people be equal in all things. To this end, the social norm of this society has become egalitarianism. Citizens strive to be of equal wealth, intelligence, athletic prowess and social status to all around them. Through a process of selective breeding, mankind is perfecting the perfectly average human being. What is not accomplished through arranged marriages is made up for through technological means, the most prominent of which are only showing mind numbing shows on TV, and a headband device worn by all citizens which modulates intelligence, dialing up or down a person's IQ in order to arrive at a 'perfect' 100.

There are limits to the success of the devices, however, and Harrison Bergeron is one such case. He is a total failure in school, consistently receiving A's (C is the desired grade). Even though he has been held back four years and his headband is consistently modified to dampen his intelligence, he still continues to excel to the embarrassment of him and his family.

Harrison goes to see a doctor about his intelligence problem, and after several tests it is determined that the headband is unsuccessful because Harrison's synaptic connections reroute themselves after each adjustment in order to overcome the inhibitions the headband is designed to place on the thought process. He is told that he will have to have an operation akin to a lobotomy in order to permanently lower his intelligence.

In his last day with a fully functioning brain, he goes to a "head house", where, in a parody of a bordello, men make plans to make high-end educational conversation with exceptionally smart women. Illegal device-free women are paid to play chess and conduct intelligent conversations with the clients. Unfortunately, his first intelligent conversation ever (with "mind whore" Phillipa) is interrupted by a police bust. While the raid on the police station is underway Phillipa addressees a hidden camera saying, not to take him away, and that she likes him. While being held captive in the police station, he is approached by a special agent who offers him an alternative to the lobotomy - to join what turns out to be the secret elite that runs the government.

Harrison falls in love with Phillipa there, but he illegally impregnates her and she is lobotomized for trying to escape. He feels he can no longer continue to betray his values and decides to take action. He breaks into a TV studio and reveals the truth about the secret society to the viewers. Eventually, the guards break through, and later on he is forced to make an appearance on TV and pretend the broadcast was not real. Instead, he uses his chance to commit suicide by shooting himself in front of the viewers. The story is framed by an additional perspective from Bergeron's parents, who are watching the incident on TV, but who, because of his father's handicapping due to his superior intelligence and his mother's less than average intelligence, cannot concentrate enough to appreciate what occurs nor remember it.

In a final scene, a young boy and his friend get together in his bedroom to watch the first four hours of Bergeron's broadcast, without their bands. Downstairs, one boy's mother looks up the stairs with a look of recognition on her face; she is seen to be Phillipa.

Quentin Tarantino Jokes About Quitting While He's Ahead: 'Most Directors Have Horrible Last

The Pyramid of Power