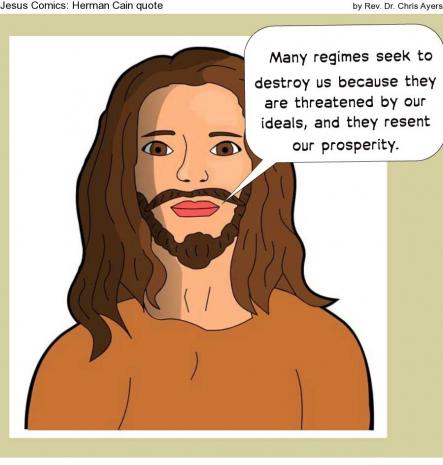 1 Comments in Response to Christ The Conservative vs. The Mark Of Cain

Great letter! But sometimes we, as Christians, feel that we must sit back and allow wicked Governments and Federal Reserve Banks to run all over us. We feel that we must "wander in caves and holes in the ground" just to live, because we are not supposed to be attached to the wickedness.

When we feel that we are to remain helpless in the presence of wickedness, remember King David of the Old Testament. He was a man after God's own heart. Yet, he was also one of the bloodiest, most ruthless warriors the world has ever known. But he was like this in righteous, in the Name of the Lord... at God's directing.

Also, look at Revelation chapter 19. See the Rider on the white horse, and realize that this Rider is Jesus, himself. Then look at what His riding is all about. Notice in verse 11: "With justice he judges and wages war (NIV)." So we, as Christians, are not always required to simply sit around and receive punishment from the wicked. Like King David and our Savior, we, too, are expected to use justice and righteousness, to wage war against wickedness, sometimes in our own spirits and lives, and other times in the real world.