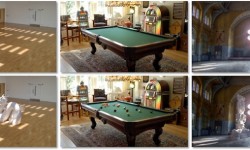 Oct 24 2011, 11:15 AM ETWe all know about photoshopping and the way it has made photographic "evidence" the least rather than the most believable indicator of underlying reality.

For the next step down this road, consider this project from Kevin Karsch, a PhD student at the University of Illinois / Urbana-Champaign. Its official title is "Rendering Synthetic Objects into Legacy Photographs." Once you realize that "legacy photographs" means "real photographs of something that actually existed," and "synthetic objects" covers just about anything you can imagine, you have an idea of the potential. But check it out (and be sure to listen to the narration):

For more discussion, see Slashdot and Vimeo. Karsch says that the system, designed to be very easy for non-techies to use, "has applications in the movie and gaming industry, as well as home decorating and user content creation, among others." Among others, indeed! I can think of: political advertising and "reality"-creation, blackmail, the ever-evolving "news" media, and the law. That old chestnut about "who do you believe, me or your own eyes" will take on a new twist. Thanks to E. Goldstick.

Update: Jamais Cascio went into some of the possibilities of this alterable video "reality," and its political and cultural ramifications, three years ago.

"Among others, indeed! I can think of: political advertising and "reality"-creation, blackmail, the ever-evolving "news" media, and the law"

While the below excerpt is in the context of the 9/11 terrorist attacks, THE POINT is the examination of video technology, AND, that it has been in the government's and main stream media's arsenal since before the year 2,000.

"Airing fake scenarios on TV is known as "TV fakery" (a term that has been used back since at least 1998). The concept of simulating a fake attack on computer and broadcasting it to the world is nothing new. The military had talked about using TV fakery well before

From the same entry as above...

"[Andrew Heyward, the president of CBS News,] said that he understood the argument against the use of the technology -- which is widely employed in sports and some entertainment shows -- on news programs.

What Is Elon Musk's X App?

Wide Release of Tesla Full Self Driving in About One Month