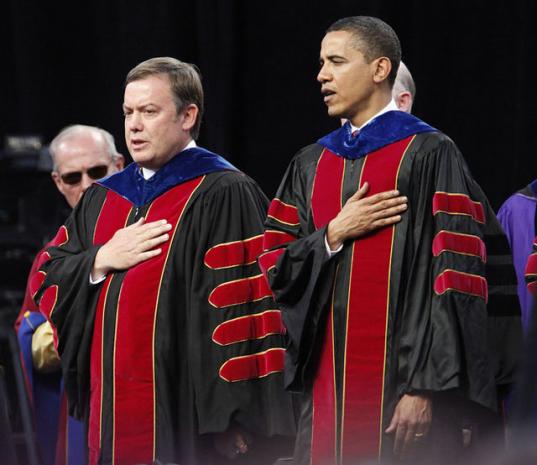 Two Scandals, One Connection: The FBI link between Penn State and UC Davis

The link to 'The Nation's' article on FreedomsPhoenix about connections between UC Davis and Penn State prompted the following email to me from a regular reader of FreedomsPhoenix... just makes the point,...
"Freedom Good,... Government bad Bad BAD!"

After reading the following it wasn't difficult to do some more research and find several interesting facts...
Just using the following words in an online search sends you down a deep dark
Rabbit Hole.
'Michael Crow Central Intelligence Agency'

CIA On Campus: The Intelligence Community Reemerges After 9/11 As a Force in Academia.

(Publisher: Email sent to me tonight)

Article from FP today...
http://www.thenation.com/blog/164783/two-scandals-one-connection-fbi-link-between-penn-state-and-uc-davis
synopsis
Two disgraced university leaders. One stunning connection. Over the last month, we’ve seen Penn State University President Graham Spanier dismissed from his duties and we’ve seen UC Davis Chancellor Linda Katehi pushed to the brink of resignation. Spanier was jettisoned because of what appears to be a systematic cover-up of assistant football coach Jerry Sandusky’s serial child rape. Katehi has faced calls to resign after the she sent campus police to blast pepper spray in the faces of her peaceably assembled students
The names Spanier and Katehi are now synonymous with the worst abuses of institutional power. But their connection didn’t begin there. In 2010, Spanier chose Katehi to join an elite team of twenty college presidents on what’s called the National Security Higher Education Advisory Board, which “promotes discussion and outreach between research universities and the FBI.”
Spanier said upon the group’s founding in 2005, “The National Security Higher Education Advisory Board promises to help universities and government work toward a balanced and rational approach that will allow scientific research and education to progress and our nation to remain safe.” He also said that the partnership could help provide “internships” to faculty and students interested in “National Security issues.”

Another Member of the National Security Higher Education Advisory Board is Michael Crow, President of ASU

Michael Crow is also a member of the National Security Higher Education Advisory Board  http://www.fbi.gov/news/pressrel/press-releases/national-security-higher-education-advisory-board-confirms-seven-new-members

What else is Michael Crow?

"Michael Crow, a former agent [of the CIA], is now president of Arizona State University"  http://books.google.com/books?id=Tn5XYpc9nwkC&pg=PA198&lpg=PA198&dq=%22Higher+Education+Advisory+Board%22+crow+spanier&source=bl&ots=bKJWXTcyjx&sig=cXYwpvS2T26P8cFFTijqaAKGK2o&hl=en#v=onepage&q=%22Higher%20Education%20Advisory%20Board%22%20crow%20spanier&f=false

Michael Crow is also Chairman of the Board of In-Q-Tel  https://webapp4.asu.edu/directory/person/66195  (click on Service)

Michael Crow was instrumental from the beginning in coming up with the concept of what In-Q-Tel would become," says In-Q-Tel spokeswoman Gayle Von Eckartsberg.-> http://www.phoenixnewtimes.com/2003-05-29/news/mission-impossible/5/

Just where do spies go to get their toys? Well, James Bond had "Q," and the CIA has In-Q-Tel. While it doesn't deal in exploding pens or cars equipped with missiles, this not-for-profit venture capital firm does keep the CIA and the broader US intelligence community equipped with the latest in information technology by investing in innovative high-tech companies. Originally named "Peleus" and renamed after the above-mentioned "007" series character, In-Q-Tel was formed in 1999 to help the CIA keep pace with the rapid technological advances of the private sector, an increasingly daunting task.

What has In-Q-Tel invested in?

What else is Michael Crow a member of (or Director of the Board of?)

-Council on Foreign Relations, DIRECTOR OF THE BOARD

-Internet2, DIRECTOR OF THE BOARD

-Translational Genomics, DIRECTOR OF THE BOARD

Michael M. Crow became the 16th president of Arizona State University on July 1 2002. He is guiding the transformation of ASU into one of the nation s leading public metropolitan research universities one that is directly engaged in the economic social and cultural vitality of its region. Under his direction the university pursues teaching research and creative excellence focused on the major challenges and questions of our time as well as those central to the building of a sustainable environment and economy for Arizona. He has committed the university to global engagement and to setting a new standard for public service.

Since he took office ASU has marked a number of important milestones including the establishment of major interdisciplinary research initiatives such as the Biodesign Institute; the Global Institute for Sustainability; and MacroTechnology Works a program integrating science and technology for large-scale applications including the Flexible Display Center a cooperative agreement with the U.S. Army. Under his direction ASU has initiated a dramatic research infrastructure expansion to create more than one million square feet of new research space and has announced naming gifts endowing the W. P. Carey School of Business the Ira A. Fulton School of Engineering and the Virginia G. Piper Center for Creative Writing.

Prior to joining ASU he was executive vice provost of Columbia University where he also was professor of science and technology policy in the School of International and Public Affairs. As chief strategist of Columbia s research enterprise he led technology and innovation transfer operations establishing Columbia Innovation Enterprises (now Science and Technology Ventures) the Strategic Initiative Program and the Columbia Digital Media Initiative as well as advancing interdisciplinary program development.

He played the lead role in the creation of the Columbia Earth Institute (CEI) and helped found the Center for Science Policy and Outcomes (CSPO) in Washington D.C. a think tank dedicated to linking science and technology to desired social economic and environmental outcomes. In 2003 CSPO was reestablished at ASU as the Consortium for Science Policy and Outcomes.    (Does this not remind of the State Science Institute from Atlas Shrugged?)

A fellow of the National Academy of Public Administration he is the author of books and articles relating to the analysis of research organizations technology transfer science and technology policy and the practice and theory of public policy.

3 Comments in Response to "Michael Crow, a former agent [of the CIA], is now president of Arizona State University"

Interestingly, one of the researchers (RFID control of Bees) is professor Andrew Hamilton having just come from U C Davis, now at ASU for at least a few years, known for his social/biology background, well known.  Orweillian and freakish as hell, from what technology and human control they are researching as anything BUT humanitarian.  I suspect that my client/friend late professor Lee Fournet's sudden illness and death is linked to her declining leadership position for them due to confronting them about not being willing to participate in the corruption.  Dr. Fournet was a very dear person, a wise and well respected woman. If the average American only knew the beginnings of technology being used against its own people...

Depopulation and Democide at Every Turn: