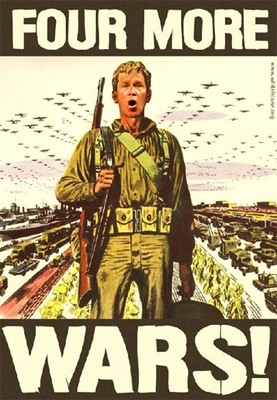 Shooting the Messenger in Syria - by Stephen Lendman

In Antigone, Sophocles said, "No one loves the messenger who brings bad news," and Plutarch's Lives noted that a messenger bearing bad news "had his head cut off for his pains."

Today, corrupt politicians and media scoundrels vilify truth-tellers of all stripes. Among others, they include social justice activists and whistleblowers. Even Washington-approved generals heading pro-imperial missions aren't spared when they fail to deliver the goods.

Instead of reporting regime violence, his comments included:

• "The situation seemed reassuring so far;"

• "Yesterday was quiet and there were no clashes;"

• "Some places looked a bit of a mess but there was nothing frightening;" and

• Assad's government has been "very cooperative."

In other words, he contradicted Western propaganda and confirmed evidence of an externally generated insurgency. As a result, he's now assailed as unreliable. Efforts are made to discredit him. Media scoundrels cheerlead it. It's their customary role. "Shoot the messenger."

Arab League monitors "bear a heavy responsibility in trying to protect Syrian civilians from the depredations of a murderous regime."

Because Al-Dabi points fingers elsewhere, he's assailed for not cooperating.

Instead of confirming regime violence, he said Assad's "government had withdrawn tanks and artillery from cities, and had released nearly 3,500 prisoners" after releasing hundreds more in November and December.

As a result, he's now criticized and accused of being "mired in controversy: a Sudanese general who, (unnamed) rights activists say presided over the same kind of deadly and heavy-handed tactics in Sudan that the Arab League is seeking to curb in Syria."

Al-Dabi "once ran Sudan's notorious military intelligence agency, and has only compounded the criticism with his recent statements."

"Last week, he spoke dismissively about the damage in Homs....On Sunday, he publicly contradicted an Arab League observer," saying government snipers were shooting people. Interviewed by BBC, he said: "But he didn't see." He was referring to a hypothetical case.

Fahim reported from Tripoli and other Libyan locations. Whether he was involved isn't known. Clearly, however, his material lacked credibility.

Now he's at it again, vilifying al-Dabi, calling him a "liability," blaming Sudan's "friendly relations with Syria," and claiming "government attacks on civilians have continued," instead of pointing fingers the right way.

Balkanizing Sudan was planned. Strategy included vilifying its government. At issue is political and economic ties to China, especially for oil.

Washington wants it cut off. North Sudan has modest reserves, but southern Sudan is oil-rich. In July, it declared independence. As a result, China may be affected.

At issue is geopolitics; namely, Washington's longstanding plan for unchallenged world dominance. Achieving it requires turning independent regimes into client ones, including violently when other methods fail.

Al-Dabi's not cooperating. On Monday, Arab League director Nabil al-Araby said he's a "capable military man with a clean reputation." However, he conceded that mission observers can't stop bloodshed. At the same time, he didn't lay blame on Western-backed insurgents.

In fact, most AL members are notorious pro-Western despots. Their record includes attacking, killing, arresting, imprisoning, and brutalizing their own people for protesting for political, economic and social justice.

They're also serial liars, pointing fingers the wrong way instead of at themselves and Western partners.

Al-Dabi "may be the unlikeliest leader of a humanitarian mission the world has ever seen. He is a staunch loyalist of Sudan's President Omar al-Bashir, who is wanted by the International Criminal Court (ICC) for genocide and crimes against humanity...."

WikiLeaks exposed his willingness to ignore US war crimes in Iraq. Throughout his tenure (since June 2003), he abstained from imperial prosecutions. He chose soft targets like Libya and Sudan. He absolved culpable major ones in Washington, Tel Aviv, London, Paris and other Western capitals.

FP is the influential Council on Foreign Relations' publication. Kenner serves as associate editor. In his customary role, he assailed al-Dabi. He made unfounded/overblown accusations. He criticized his "checkered past," including responsibility "for the worst atrocities during the Darfur genocide."

His report lacked credibility. It was one-sided attack journalism. It's typical corporate media managed news, not the real thing everyone deserves.