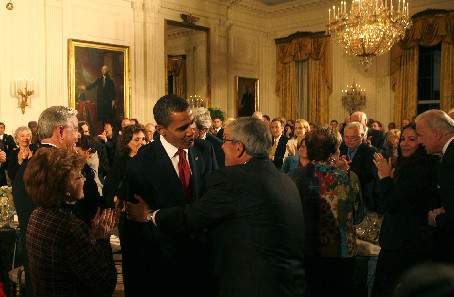 Wall Street does it by controlling money, credit and debt, as well as manipulating markets for private enrichment. House and Senate millionaires do it their way for greater wealth, privilege, power and status.

"(A)nd the wealth gap between lawmakers and their constituents appears to be growing quickly" as austerity cuts harm most Americans needing help during harder than ever hard times.

Since 2008, they've lost jobs, homes, personal savings, and futures. At the same time, congressional members are richer than ever. Perhaps never "has the divide (been) so wide, or the public contrast so stark, between lawmakers and those they represent."

No wonder Gallop's year end poll showed Congress getting its lowest ever 11% approval rating. At the same time, growing numbers of Americans reject both parties for independent or unaffiliated status.

On November 14, the Atlantic Wire headlined, "How Members of Congress Get Rich Through 'Honest Graft,'" saying:

"A 60 Minutes report examined the ways members of Congress trade on inside, privileged information" to get rich. "Congresspeople are exempt from insider trading rules" so profit in ways others can't legally.

They do it through stock trades and privileged business deals. Former House Speaker Dennis Hastert earmarked funding for a federal highway project on land he owned. He later sold it for $2 million.

Former Speaker Nancy Pelosi profited from eight IPOs, including some "that had business before her House." So have other congressional members, past and present.

Numerous others in Congress profit the same way. Some hit the jackpot. In 2004, the Journal of Financial and Quantitative Analysis published a report showing Senate portfolios outperformed the market by about 12% annually. It didn't happen by chance.

Washington runs on inside information. Congressional members use it to get rich. While their median net worth gained 15% from 2004 to 2010, America's 10% richest found theirs unchanged, and for Americans overall, it dropped based on inflation-adjusted dollars.

Of course, America's top 1% outdid them all. Why else would nationwide protests target them for social justice.

Notably, congressional wealth grew two and a half times (from $280,000 to $725,000) from 1984 to 2009 in inflation-adjusted dollars, while for average Americans it declined slightly. Moreover, for the past half century, income inequality mostly benefits congressional conservatives. Progressivism pays poorly.

In 1984, one in five House members had zero or negative net worth, excluding home equity and other non-income producing property. By 2009, it dropped to one in 12.

As a result, the gap between congressional members and their constituents perhaps never has been so wide. Moreover, it increases annually at a time Main Street's suffering harder than ever hard times, and few in Washington care.

"These days, being a millionaire (puts you in) the (top) one percent. But in Congress, it only makes you average."

Among 535 House and Senate members, 250 (or 47%) are millionaires, based on 2010 financial disclosure forms. Only America's top 1% enjoys that status. According to CRP's executive director Sheila Krumholz:

"The vast majority of members of Congress are quite comfortable financially, while many of their own constituents suffer from economic hardship."

It's largely from decades of destructive bipartisan policies. Since the 1980s, economic inequality grew enormously. Business and super-rich elites profited handsomely at the expense of working class people.

Wealth disparity is unprecedented at a time nearly 23% of Americans are unemployed. Half of US households are impoverished or bordering on it. Millions lost homes, and growing hunger and homelessness threaten millions more.

In contrast, congressional members never had it so good. "It's no surprise that so many people grumble about lawmakers being out-of-touch," said Krumholz. "Few Americans enjoy the same financial cushion maintained by most members of Congress - or the same access to market-altering information that could yield personal financial gains."

Moreover, congressional pay, benefits and perks alone are generous. In 2011, rank and file House and Senate members earned $174,000. According to US Census data, median 2010 household income is $48,753.

Moreover, generous benefits and allowances are provided, including lucrative pensions based on years of service, peak salary levels, an accrual rate, and whether members are covered under the Civil Service Retirement System (CSRS) and/or the Federal Employees Retirement System (FERS).

For example, a House or Senate member retiring in December 2010 with 32 years of service averaged $92,251 in annual pensions supplemented by cost of living increases. Most members have shorter tenures and get less. By law, pensions can't exceed 80% of final year of service pay.

By law, all House and Senate members must report their own holdings and that of spouses and dependents annually. However, precise investment values can't be determined so estimates are made. They exclude non-income generating personal property (including homes, cars, artwork, etc.) and pension benefit values.

Moreover, the top spousal bracket is "more than $1 million," so true net worth amounts for many lawmakers "are likely undervalued." For example, some believe John Kerry's wife Teresa Heinz's net worth exceeds $1 billion. As the Heinz heiress, it's likely more.

At a time class war in America rages, growing human need goes unaddressed, Washington is corporate occupied territory, and endless imperial wars ravage the world one country at a time with more planned, congressional members never had it so good.

Change never comes top down, only bottom up. Society's privileged with power never yield it. Pressure's building to force them. Human need's too great and worsening. When pain levels cross a threshold of no return, all bets are off. Or as Gerald Celente says:

"When people lose everything and have nothing else to lose, they lose it."

That moment of truth draws closer, and not just in America.