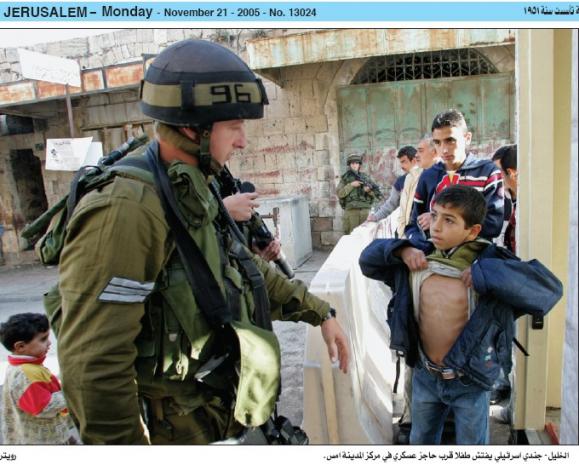 DCI/Palestine "is a national section of the international non-government child rights organisation and movement (dedicated) to promoting and protecting the rights of Palestinian children," according to international law principles.

On December 28, it submitted a complaint to several UN authorities titled, "The use of solitary confinement on Palestinian children held in Israeli detention." It's specifically for five children held at Al Jalame and Petah Tikva interrogation centers in Israel.

Their cases follow 29 others since February 2008. At both facilities, "solitary confinement is routinely used."

Though no universally agreed on definition exists, the Istanbul Statement on the Use and Effects of Solitary Confinement defines it as physically isolating prisoners in cells for 22 to 24 hours daily. Human contact is minimized, including quantitative and qualitative stimuli.

The harmful psychological and physical effects are well documented. They include:

• for many, a totally dysfunctional state and inability ever to live normally outside of confinement.

As a result, UN Special Rapporteur on Torture Juan Mendez called for totally banning it for children. Calling it "torture or cruel, inhuman or degrading treatment or punishment," he stopped short of demanding its prohibition against everyone.

In 2007, the UN Committee on the Rights of the Child urged the practice be "strictly forbidden."

From February 2008 through November 2011, DCI/Palestine documented 34 child abuse cases. They endured "cruel, inhuman or degrading treatment or punishment, and in some cases, torture, in violation of the" Torture Convention, the Convention on the Rights of the Child, the Covenant on Civil and Political Rights, and Fourth Geneva.

Israel spurns all international laws with impunity, including those pertaining to war, occupation, and fundamental humanitarian and human rights.

At Al Jalame, children are held in 2 x 3 meter cells. In 2009, one child endured 65 days of punishment. All of them sleep on concrete beds, or on the floor on thin, dirty, foul-smelling mattresses. Meals pass through door flaps, depriving them of human contact.

Al Jalame's "Cell No. 36 (like all isolation ones) has "sharp protrusions preventing the children from leaning against them for support." It's windowless with artificial light only coming from dim internal lighting kept on 24 hours a day.

As a result, "(s)ome children report suffering pain behind their eyes and adverse psychological effects."

Children at Al Jalame and other interrogation facilities are generally denied access to lawyers and family visits in violation of Fourth Geneva and other international laws.

DCI/Palestine submitted complaints for five Palestinian children. They were identified only by initials, age, gender, ID No., and place of origin.

On October 15, 2011, Israeli soldiers arrested OA at 2AM from home. He was blindfolded, painfully shackled, placed in a military vehicle, taken to Huwwara interrogation center in Palestine, forced to sit on the ground until dawn, and refused permission to use a toilet.

Later that morning he was taken to Petah Tikva interrogation center in Israel in violation of Fourth Geneva. He was stripped searched, and denied legal counsel. With his hands tied to a chair, he was interrogated by a man called "Morris."

Accused of throwing a Molotov cocktail at an Israeli jeep, he denied it. After two hours of interrogation, he was placed in isolation he described as follows:

"It was a very small cell with a mattress on the floor, a toilet and two concrete seats. It did not have any windows, just a vent for air conditioning. It was very cold because of the air conditioning. I could not sleep because there was a yellow light on 24 hours a day. I was detained in the cell for two days, before being transferred to Al Jalame."

There, he was isolated for five days. His detention was extended. He wasn't in court and doesn't know if counsel represented him. He was then sent back to Petah Tikva, held another nine days under identical conditions, and interrogated twice before confessing, saying:

"I was in a very bad psychological state, so I decided to confess. I confessed to throwing Molotov cocktails and stones at army jeeps," even though he was innocent.

Isolated for 16 days, he's now at Megiddo prison in Israel.

International laws were grievously violated, including the UN Convention on the Rights of the Child (CRC). It's Article 37(b) states:

"The arrest, detention or imprisonment of a child...shall be used only as a measure of last resort and for the shortest appropriate period of time."

In fact, Palestinian children are routinely arrested at checkpoints, on streets, going to or coming from school, tending olive groves, at play, and (most commonly) at home in the middle of the night.

Usually it's from midnight to 4AM. Family members are threatened not to intervene. If they try, they're assaulted and forced onto streets in their nightclothes, regardless of weather, and given no explanation.

Typically, arrests are lawless and violent. Homes are broken into unannounced. Property is damaged or stolen. Children are blindfolded, shackled, often beaten, then thrust into jeeps, sometimes face down.

In interrogation centers, inhumane treatment continues, including beatings, verbal abuse and intimidation. Most often, lawyers aren't present until questioning ends with a signed Hebrew confession children can't read or understand. Once gotten, they're used to convict even though torture extracted evidence is inadmissible under international law.

Article 15 of the UN Convention Against Torture states:

"Each State Party shall ensure that any statement which is established to have been made as a result of torture shall not be invoked as evidence in any proceedings, except against a person accused of torture as evidence that the statement was made."

• other forms of sensory deprivation;

• no food and water for extended periods;

• exposure to extreme heat or cold;

• threats, insults and cursing; and

More serious offenders face no limits. Military Order 378 permits up to 20 years for stone-throwing (the most common offense charged). Moreover, children 16 or older are considered adults and treated no differently. Under international law, adulthood begins at age 18.

Under military occupation, Israel's system is rigged to convict and brutalize before and after incarceration, despite Fourth Geneva's Article 147 requiring fair trials, and holding those responsible for denying them criminally liable.

International law also forbids torture, other abuse and inhumane treatment at all times, under all conditions with no allowed exceptions. Israel ignores all international laws. It does what it please, including against children young as 10 no matter their innocence.

DCI/Palestine and other human rights organizations demand these crimes against humanity end and those responsible held accountable. So far it hasn't happened.