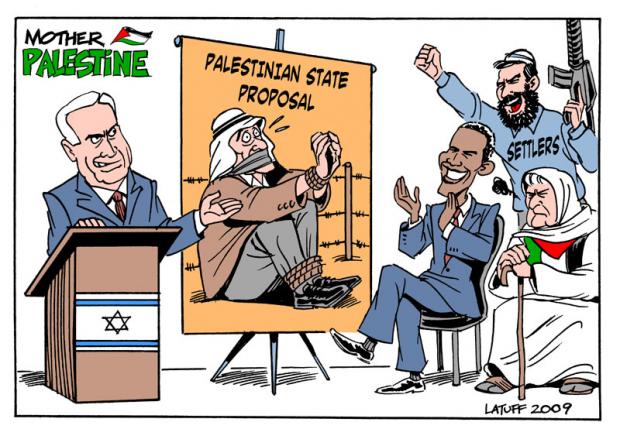 B'Tselem's been on the story for years. Settler violence is longstanding, troubling, and largely without accountability.

Since September 2000 alone (the beginning of the second Intifada), the toll includes 50 Palestinians killed. Since December 1987 (the first Intifada's onset), it's 115, besides many more injured, including children.

B'Tselem documented numerous incidents, including blocking roads, stoning cars and homes, torching fields, uprooting trees and other crops, as well as other forms of violence and damage.

In response, Israeli security forces do little despite a High Court ruling that "protecting the security and property of the local residents is one of the most basic obligations placed upon the military commander in the field."

Moreover, Justices said Israeli authorities must "give unequivocal instructions to the forces that are deployed in the field." They must also "allocate forces to protect the property of the Palestinian residents."

More on the most recent incidents below.

As a result, they enjoy liberties and legal guarantees not afforded Palestinians, including when charged with similar or identical offenses.

Under military occupation, nationality and religion are determinate, not judicial fairness. Equity is denied. So are territoriality principles under which law and order standards apply uniformly for every area resident. Not in Occupied Palestine.

For Israelis, in contrast, authorities apply an "undeclared policy of forgiveness, compromise, and leniency in punishment." Moreover, most violent or other abusive acts against Palestinians are ignored.

In addition, security forces do little to prevent settlers from harming Palestinians or their property. Inaction amounts to encouragement. Palestinians aren't protected.

Most incidents aren't investigated. Others are whitewashed. In rare cases of settler convictions, sentences are extremely lenient in contrast with harshness against Palestinians.

Knowing the futility of trying, they rarely file complaints. Moreover, police stations often are in accessible. In addition, authorities go out of their way not to help.

Fourth Geneva's Article 49 prohibits "(i)ndividual or mass forcible transfers, as well as deportations of protected persons, from occupied territory to the territory of the Occupying Power or to that of any other country (regardless) of motive."

In addition, the 1907 Hague Convention prohibits occupiers from making permanent changes in occupied areas, except for military necessity in its narrowest sense or to benefit resident people.

So do human rights violations by their presence, including equity, property rights, free movement, expression and assembly, judicial fairness, safety, and Palestinians self-determination within 1967 borders - 22% of historic Palestine.

In contrast, settlers enjoy rights given all Jewish citizens, as well as special benefits to encourage Israelis to move.

No wonder over half a million Israelis took advantage, mindless of how they violate Palestinian rights under fundamental international law.

Jerusalem: A Case in Point

For Jews, Jerusalem is their historic capital. For Christians, it's where Jesus preached and healed. Muslims also call it their third holiest site after Makkah and Medina, Saudi Arabia. It contains the 35 acre Noble Sanctuary (al-Haram al-Sharif), including the Al-Aqsa Mosque and Dome of the Rock.

In 1947, UN Resolution 181 established Jerusalem as an international city under a UN Trustee Council, a provision still binding. Nonetheless, in 1948, Israel occupied West Jerusalem. In 1967, it occupied East Jerusalem.

In July 1980, it annexed the entire city. In August 1980, Security Council Resolution 478 followed. It declared Israel's Jerusalem Law null and void with no legal validity. Israel ignored it like dozens of other UN resolutions and all international human rights laws.

Since 1967, Israel tried to create a demographic/geographic reality on the ground to entirely Judaize the city. As a result, Jews systematically displace Palestinians.

Moreover, Israel physically isolated East Jerusalem from other West Bank areas, including by its Separation Wall. Other lawless practices include land expropriation, home demolitions, dispossessions, denying Palestinians basic rights, and doing whatever it takes to remove them.

Under international law, East Jerusalem is occupied. Annexing it was illegal. Palestinians rightfully claim it as their capital. Israel pays no heed by violating their rights systematically.

On December 3, settlers endangered Palestinian women in a taxi near Gilad Farm settlement outpost. They threw stones. No one was hurt. The driver complained to nearby soldiers. No intervention followed.

On December 7, settlers tried to torch a Brukin village mosque. They also sprayed Hebrew slogans on walls. In addition, cars and a tractor were set ablaze. Police said they'd investigate. Don't bet on it.

On December 12, settlers attacked Asira al-Qibliya village near Nablus. They threw stones and broke windows. They also smashed a cab window and doused it with petrol. Soldiers were late arriving. Instead of pursuing settler perpetrators, they assaulted Palestinians outside their homes with stun grenades.

At 9PM the same day, a Palestinian family car was assaulted. Its windshield was smashed. A mother inside was overcome. Her infant daughter received facial scratches. Police said they'd investigate. Expect the usual way.

On December 15, a Burka village mosque was torched. "War" and "Mizpe Yizhar" were sprayed on walls. Angry Palestinians threw stones at late arriving soldiers. They responded with tear gas.

Since 2008, eight mosques have been set ablaze. No prosecutions followed.

On December 19, Bani Na'im residents found "Price Tar" and "Yizhar" sprayed on fences encircling a mosque, as well as a racist prophet Muhammad slogan. No indication of an investigation followed.

Settlers regularly intimidate and assault Palestinians and their property with impunity. Nearby security forces don't intervene. Often they commit violence.

Investigations seldom follow. Those done are whitewashed. Settlers rage with impunity. So do security forces. World leaders turn a blind eye. As a result, Palestinians are denied protection and justice.

Under occupation, they've gotten none for decades.