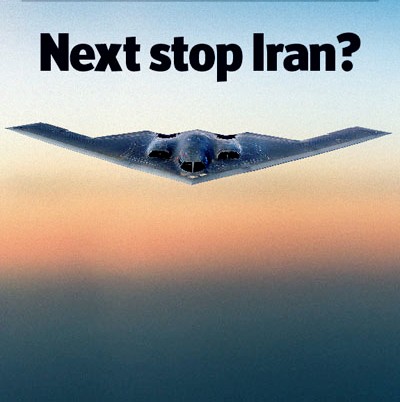 In June 2009, a Brookings Institution report titled, "Which Path to Persia? Options for a New American Strategy Toward Iran" was a regime change policy paper. Pro-Israeli right-wing ideologues prepared it, including:

• allowing or encouraging an Israeli attack;

Its introduction stressed "the trouble with Iran," asking what should America do about it? It falsely claimed Iran's well along toward developing nuclear weapons. It also sited "Iranian mischief," including "support for terrorist groups," and its "wider efforts to overturn the regional status quo."

It claimed alleged "incontrovertible" evidence that "Iran has aided groups seeking to overthrow the governments of Saudi Arabia, Kuwait, and Bahrain (and arguably Lebanon and Israel as well) at various times," but didn't reveal it.

In addition, it claimed alleged evidence shows "Iran may have encouraged (perhaps even ordered) various groups to mount attacks that have derailed (Israeli - Palestinian) peacemaking efforts."

It asked if Washington "should (be) willing to accept the Islamic Republic at all."

Iran hasn't attacked another country in over 200 years and threatens none now. However, Brookings called Tehran a threat to America, when, in fact, Washington very much threatens Iran, the region and other independent states worldwide.

Brookings ignoried America downing Iran Air 655 in July 1988 in Iranian air space, killing 290 passengers and crew on board. Instead, it falsely accused Tehran of attacking US Persian Gulf naval forces in 1987 and 1988.

In fact, an Iraqi missile struck the USS Stark in March 1987, and the USS Samuel B. Roberts struck an Iranian mine in April 1988 in waters it had no business being in.

Brookings stressed "ticking clock" urgency to act....(I)gnoring Iran is no long a realistic alternative (because) Iran('s) the bane of the United States in the Middle East."

Claiming its position doesn't "argue for one approach over another" dismisses its hawkish stance.

For months, media scoundrels promoted it. They headlined bogus accusations about Iran plotting to kill Saudi Arabia's US ambassador. They feature stories about Iran's alleged nuclear threat despite no corroborating evidence proving it.

"The Iranian nuclear clock ticks faster and louder in 2012." Israel's defense minister Ehud Barak said they'll have nuclear weapons in nine months and move into a "zone of immunity" safe from attack.

US defense secretary Panetta believes it in a year, saying (i)f we have to do it, we will deal with it." Perhaps he means an election year October surprise after another self-inflicted homeland terrorist attack blamed on Iran.

Instead of responsible reporting, Vanocur encouraged war. So do other MSM contributors in print and on air.

On December 29, a Times editorial headlined, "Iran and the Strait," saying:

Doing it will be countered. "A Fifth Fleet spokesman usefully reminded Iran this week that the Navy always stands 'ready to counter malevolent actions to ensure freedom of navigation.' "

According to IAEA "inspectors, Iran has created computer models of nuclear explosions, conducted experiments on nuclear triggers and completed advanced research on a warhead that could be delivered by a medium-range missile."

So do independent nuclear experts and America's Annual Threat Assessment of the US Intelligence Community as recently as March 2011.

"Tehran's latest threat to block global oil shipping should leave no doubt about its recklessness and its contempt for international law. This is not a government any country should want to see acquire nuclear weapons."

Times contributors dismiss issues of equity, justice, rule of law standards, and peace. Instead, they cheerlead US wars and promote new ones.

Presidential aspirant Ron Paul said sanctions aren't "an effective means to encourage a change of behavior in another country without war. However, sanctions and blockades are not only acts of war....they are most often the first step toward" it.

"Iran has every right to develop nuclear energy for peaceful purposes." No evidence suggests "Iran has diverted enriched uranium for the peaceful and lawful generation of power toward building a nuclear weapon."

"We should be clear about this: sanctions against Iran are definite steps toward a US attack" as they were against Iraq and Libya. Moreover, disrupting Iranian oil shipments will harm "global trade and undermine the US economy, which in turn harms our national security."

"This race to war against Iran and Syria is both foolhardy and dangerous."

Paul added that threatening to block the Strait of Hormuz is a plausible response without "weapons of mass destruction" to deter menaces.

In fact, Paul's record on war is mixed. He supported attacking Afghanistan, but called war on Libya "unconstitutional (and) a loss for our American Republic."

He opposed attacking Iraq because Congress illegally ceded authority to Bush. In addition, he claimed it gave UN members say over US foreign interventions.

In fact, US ambassador April Glaspie OK'd invading Kuwait to settle a border dispute over cross-drilling into Iraqi territory. A recent WikiLeaks release confirmed it: the Glaspie Memo known as 90BAGHDAD423.

Claiming Iran seeks nuclear weapons is a ruse. At issue is regime change to turn an independent state into a client one. Times writers, op-ed contributors, and editors know it but feature managed news and opinion, not truth and full disclosure.

So do other major media scoundrels.

"By now it should be obvious that only regime change will stop the Iranian nuclear program. That means, at a minimum, the departure of Supreme Leader Ali Khamenei...."

In other words, whatever it takes is OK, including war against another nonbelligerent state posing no threat.

"The US and Europe are at last mustering the gumption to target Iran's multibillion-dollar oil industry, and almost immediately Tehran is threatening to bring Persian Gulf tankers to a halt."

Around 40% of sea-borne oil passes through the strait or about 15.5 million barrels daily. Disrupting it, of course, affects all regional producers, including Iran. Catastrophic economic consequences would result, including skyrocketing oil prices. So would war by bringing America and Iran into direct confrontation.

"Iran's leaders are trying to see if they can intimidate (Washington) into backing down. The Western response should be to tighten sanctions further to show such tactics won't work."

"The episode is also a reminder (of Iran's) character and intentions....wholly in character for the world's leading state sponsor of terrorism." Disrupting Hormuz shipments should "be considered an act of war that would be met with a military response (against) Iran's military and nuclear assets, perhaps even its regime."

Initiating war on Iran and/or Syria could be catastrophic, especially if nuclear weapons are used. Yet major media scoundrels promote it, mindless of the potential consequences.

Nonetheless, more war in 2012 is likely because Washington, Britain, France, and Israel want it, no matter the risks.

Perhaps a September or October surprise will become pretext to launch it. It wouldn't be the first time.

1 Comments in Response to Promoting War on Iran

{Iran hasn't attacked another country in over 200 years and threatens none now.}

The more I read Lendman's hard left agitprop, the more it seems he's funded by the KGB.  Russia has a vested interest in making and keeping Iran their client state to get access to the Persian Gulf.. For instance, Lendman's agitprop not only against Israel and the U.S., but the Saudis.  So why doesn't he just end each agitprop with Das Vidanya and get it over with?

The horrible hideous Islamic Republic of Iran must go no matter how much Russia and China like it. The U.S. doesn't want to make it into a "client state", but to end its mullahcracy and free its people, if possible so that they can rejoin the human race, the capitalist human race. Either way, it wants to end the rule of the mullahs and their rush to get nukes to use on Israel and who knows who else, probably us.

Of course Russia and China are the wild cards in the Middle East conflict, underestimating the threat of Islam to their countries and willing to ally with them against the U.S. and Israel for temporary advantage.  Russia is daily threatening to re-Sovietize, but realistically its military couldn't be restored until at least 2015. Catch up to the modern Muslim World fast and free in your browser with the Historyscoper's Freakin' Powerful Muslimscope:

Keep up on daily global news of Islam: